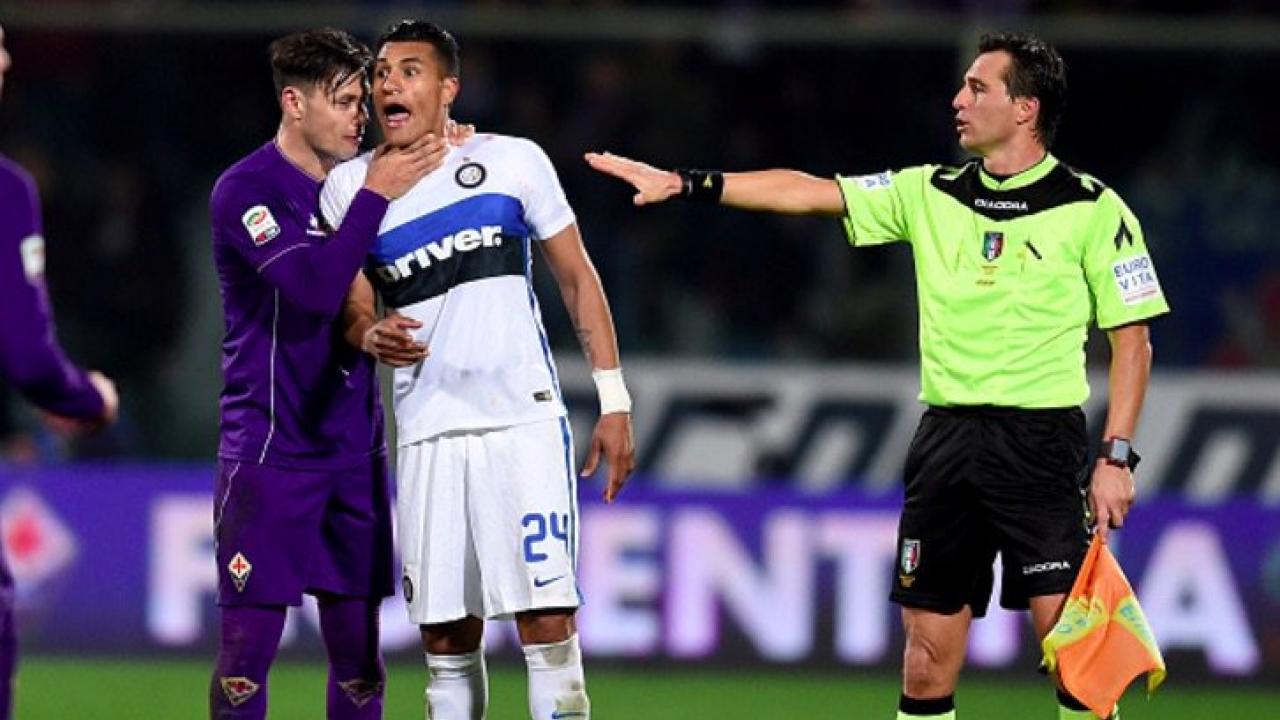 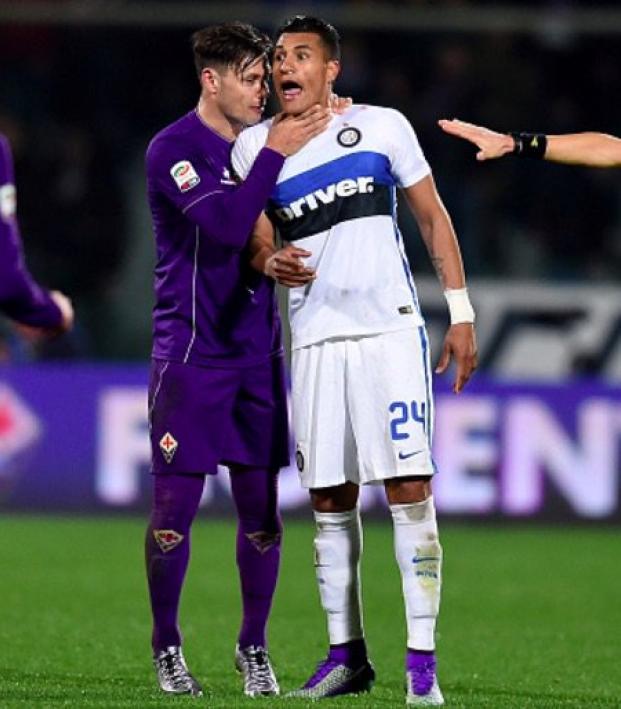 Huw Thomas April 25, 2017
There were nine goals in Florence, one of the season’s most exciting matches, but neither side will have left completely satisfied.

Nine goals. Nine. Four goals for Inter, five for Fiorentina. I think it’s fair to say that no one expected that. Elsewhere, Juventus demolished Genoa with four goals and no reply. Expected. Lazio rumbled right over Palermo, going five-nil up in thirty minutes and finishing the game six to one. Expected. Napoli drew two apiece away at Sassuolo. Not that expected, to be honest, but not that shocking. But Fiorentina five, Inter four? That’s a result that makes you sit up and take notice.

Going into the game, it was clear that these were two flawed sides. Inter, as we discussed last week, managed to lose in the last minute against crosstown rivals Milan and it seemed for sure that Inter manager Stefan Pioli would be let go in the summer. In Florence, it was confirmed by the club hierarchy that they would indeed be letting manager Paulo Sousa leave in the summer, a fairly indifferent parting after a fairly indifferent two years.

With both managers seemingly in the bin, both squads needing quality reinforcements and fans drowning in apathy for the potential Europa League qualifiers that these teams were playing for, a dull draw could have been expected. These teams are basically treading water. Going nowhere.

Admittedly, Fiorentina have only lost one game at home this season. There’s been too many draws, certainly, and the football has been far from entertaining, as the match against Juventus showed, given the situation, the Stadio Artemio Franchi can be roused from its slumber.

But, at first, it seemed as though it would be a sleepy night. For twenty minutes the sides exchanged jabs. Wounded animals, unwilling to really commit too much for fear of being caught short, both teams played into the fans’ expectations. And then Matías Vecino opened the floodgates. The Uruguayan hasn’t scored all season, but his late run into the area coincided with a neat cut back and the ball rocketed into the roof of the net. The Franchi began to bounce.

As the second half began, Inter saw fit to break out the showmanship.

It wasn’t so much that they switched off entirely in the coming minutes, but there was a clear suggestion that Fiorentina were spurred into action and Inter were unprepared for the force of the comeback. The home side began to rise through the gears in an admirable fashion.

Soon, Vecino and Borja Valero (whom we are contractually obliged to mention once played for West Bromich Albion) found space between the lines. Upfront, Khouma Babacar was set to capitalize. Tensions between the young striker and his Portuguese coach have been noted throughout this season. With Nikola Kalinic (firmly first choice) suspended for this game, the fan favourite academy graduate had a chance to make the position his own.

But the second Fiorentina goal came from an unlikely source. Davide Astori, the center back with the wandering mind, leveled from a corner. Vecino gave the Viola an improbable 3-2 lead with his second a few minutes later. On seventy minutes, Khouma Babacar gave them a two-goal lead. Nine minutes later, Babacar added his second. It was five to two. A complete turnaround with ten minutes to go.

Now the stadium was rocking. This was a fantastic response from Fiorentina but an astonishing collapse from Inter.

But the story wasn’t close to ending. In the 88th minute, Icardi got his second goal. In the first minute of stoppage time, he got another. It was five to four. There were still a few minutes to go. All semblance of control had vanished from the game. This was now a competition to see who could do the best job of bottling their lead. Fiorentina nearly managed to come out on top (or is that on the bottom?), but Inter couldn’t get their fifth.

With nerves shredded to pieces in the final few minutes, the Franchi and its fans roared into delight at the final whistle. A fantastic match. A fantastic spectacle, but both sides will be left with regrets.

For Inter, the fall out was immediate. According to some media outlets, Pioli offered his resignation right there in the dressing room. After only managing two draws from his past five games, his initial buoyancy has sunk without a trace. At this point, it might be worth discussing whether the coaching position at Inter is legitimately cursed.

Every manager seems blighted by that particularly Inter-istic ability to capitulate at the worst possible moment. It’s a tendency that transcends particular individuals, players, coaches and owners. The Suning Group (the new Chinese owners) have resolved to throw money at the team. Underinvestment has never been Inter’s problem. But they’ll try again anyway.

Apart from Juventus, it’s possible to argue that Inter have the best squad in the league. Aside from glaring issues at fullback, they have excellent players in many positions and the kind of depth most clubs would kill for. Given that their mooted top targets are Diego Simeone and Antonio Conte, there’s a desire to get a big-name manager as well. But it won’t guarantee success.

Indeed, Atalanta spent the weekend winning 3-2 against Bologna. Their wage budget is a fifth of Inter’s own. While they do boast one of the country’s best youth academies, they can’t hope to match Inter when it comes to resources. Even more damning is the fact that Atalanta lost 7-1 to Inter a few months ago, clearly the weaker team on the day. Now, they’re sitting pretty in fifth while Inter struggle to pick up their coattails.

Inter will spend more money and will continue to disappoint. That’s just the way of things, really. But it’s nice to be reminded of the crushing inevitability of the universe every now and again. For Fiorentina, there is a very different kind of malaise settling over the team. There is no doubt now that Sousa has been a failure. Disappointing European performances and boring football aside, the former Juventus man has hardly ever seemed like a natural fit in Florence.

The board seem to have thought that the qualities that helped Vincenzo Montella and Cesare Prandelli succeed at Fiorentina were more to do with suave urbanity rather than possession-based attacking football.

Sousa will leave and no one will care much. Talk of him taking over at Juventus in the wake of Allegri’s departure is surely laughable. But worse is that this result demonstrated how much potential resides within the Fiorentina team. Federico Bernadeschi gets the headlines, but Federico Chiesa and Babacar are both excellent players. Milan Badelj, Borja Valero and Gonzalo Rodriguez are more experienced but equally as commendable. All could leave at the end of the season.

So how do Fiorentina resolve the situation?

They’ve decided to go Italian. There’s been an effort to bolster the youth ranks, filling out the gaps in local talent with surprisingly-sourced players from the Balkans (a speciality of Pantaleo Corvino, who is in charge of the talent recruitment). Added to this, there have been plenty of links with Eusebio Di Francesco as Sousa’s replacement.

The current Sassuolo coach seems a natural fit. Young, attacking but willing to be pragmatic, a nurturer of talent (as evidenced by Domenico Beradi and Simone Zaza), and ready to make the step up after many seasons of success at his current club. It could be the ideal move.

So, while Inter will endeavor to find new ways of failing at the same job, Fiorentina could be making the right choices. Just as Inter managed to crumble on the pitch on Saturday, allowing Fiorentina to take advantage, it could well be reflected in the respective boards’ actions this summer.