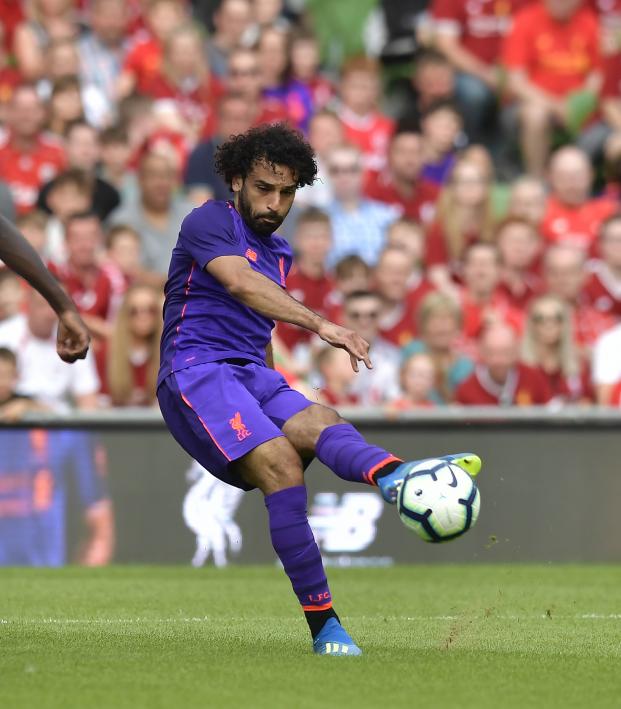 Liverpool eviscerated Napoli on Saturday in the final preseason tune-up for Jurgen Klopp’s side. The match finished 5-0 and, perhaps most importantly, the Mo Salah goal vs Napoli showed the Egyptian is already in midseason form.

The Reds took a lead inside five minutes through James Milner and led 2-0 before the 10th minute with a header from Georgino Wijnaldum. But the first goal of the second half was by far the prettiest.

Mohamed Salah, the Egyptian king, didn’t have a great summer after injuring his shoulder in the ill-fated Champions League final against Real Madrid. He scored twice in the World Cup, but both goals were in losing efforts and one came from the penalty spot. The Pharaohs flamed out of Russia without a win.

So one could excuse Liverpool’s lovable star starting the 2018-19 season slowly. But this brilliant, perfectly placed strike shows that’s unlikely to be the case.

The Mo Salah goal vs Napoli came in the 58th minute, the third in the five-goal onslaught. Salah showed his characteristic drive to reach the initial ball into the box and then reach the ensuing loose ball first. Then his sublime skill took over.

We saw plenty of goals like this one last season and it’s likely we’ll see plenty more this coming season.

The win over Napoli concluded a strong preseason for Liverpool. The Reds beat Manchester City and Manchester United (the latter by a 4-1 margin thanks to this wonder goal). The lone blemish came at the hands of American wonder boy Christian Pulisic and Borussia Dortmund.

In addition to Salah’s goal, Liverpool fans will be excited about the play of Alisson. The Brazilian goalkeeper made his debut with the Reds against Napoli and his distribution was on point. He started the play for Salah’s goal and nearly provided the impetus for a goal in the third minute.

Klopp would love for Alisson to replicate Ederson’s distribution with Manchester City last season. He might be yet another weapon at Klopp’s disposal.

Plus, even Daniel Sturridge got on the score sheet for Liverpool.

Liverpool might be the only club with the firepower to challenge Manchester City for the Premier League title this season.