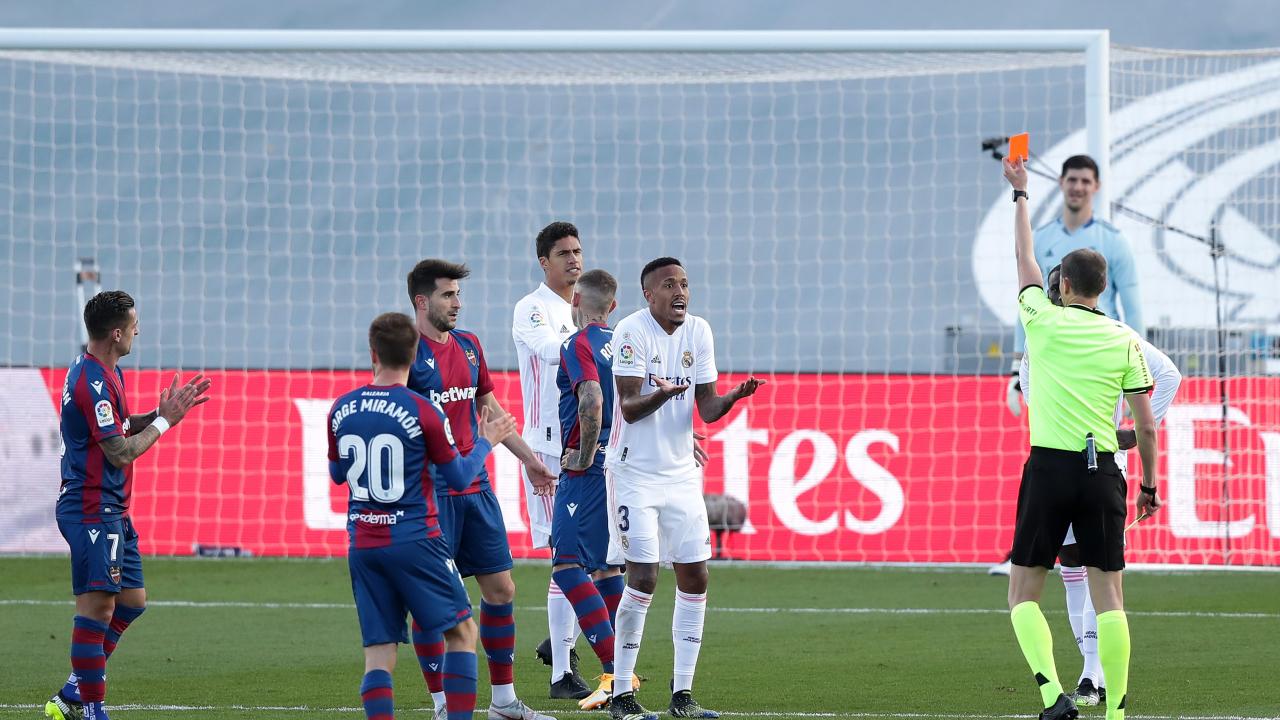 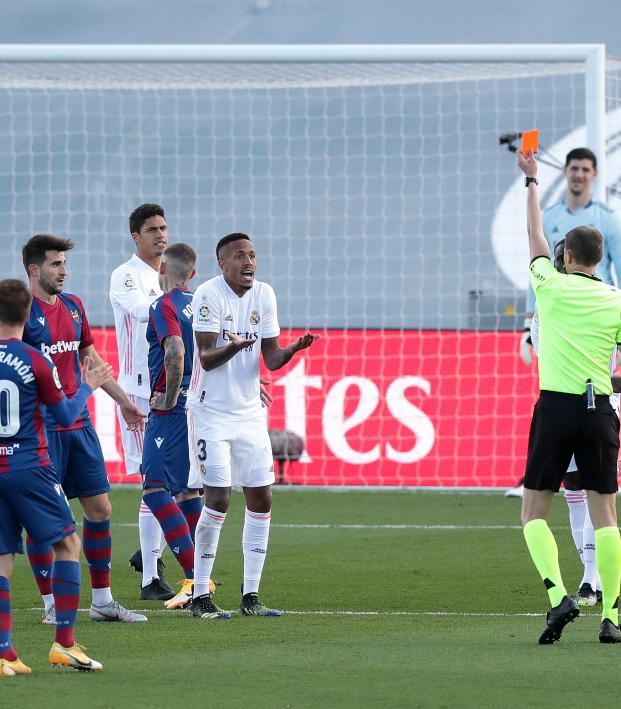 Give Up A Goal Or Be Sent Off? Real’s Éder Militão Made The Wrong Choice

Travis Yoesting January 30, 2021
Real Madrid center back Éder Militão was shown straight red in the ninth minute of his team’s 2-1 defeat to Levante.

It’s a decision every footballer has pondered at some point: When is it worth committing a red-card offense to prevent a goal from being scored? It’s hard not to think the Éder Militão red card in a 2-1 defeat to Levante on Saturday was the wrong choice.

There are times in a match when it is better to put yourself at risk of earning a red card in order to keep the other team from scoring. The perfect example of this is Luis Suárez’s hand ball against Ghana at the 2010 World Cup. In the 120th minute in a thrilling World Cup quarterfinal, Suárez used his hands to save a shot off the goal line. The Uruguayan was sent off, but Asamoah Gyan hit the ensuing penalty kick off the crossbar and La Celeste won the shootout minutes later.

While many (including anyone rooting for Ghana) considered it a dirty play, the truth is that it was a moment of brilliance. Suárez was properly punished and missed his country’s 3-2 defeat to the Netherlands in the semifinals, but his sacrifice prevented what would have been a sure loss in the quarterfinal.

As great as Suárez’s heroics were, there is another side to the coin. There are times when it is better to let your opponent score rather than pick up a red card. If it’s early in the match (anytime in the first half and even into the second half) or if your team is the heavy favorite, it is unwise to commit a red-card offense to prevent a goal scoring opportunity.

Militão did not take either of those factors into account early in Real Madrid’s match against Levante on Saturday.

In the seventh minute of a scoreless match, Sergio León raced toward Thibaut Courtois’ goal without a defender in front of him. Raphaël Varane had been beaten for pace and Militão was attempting to race back into position. In his rush, Militão bundled into León, who cleverly cut inside to prevent the defender from making a play on the ball.

The referee initially showed yellow, but the help of the VAR confirmed Militão was the last man denying an obvious goal-scoring opportunity and was rightly sent off.

Should this have been a red card for Éder Militão? #RealMadrid pic.twitter.com/NSZ7fGFX6E

If this was the 80th minute, you could accept Militão’s red card. In the seventh? Not a chance.

Playing a man down for a small portion of the match is manageable, especially for a team of Real Madrid’s quality. Indeed, Los Blancos took the lead four minutes after the red through Marco Asensio. But eventually the disadvantage wore on Real.

José Luis Morales hit a stunning half-volley in the 32nd minute to equalize. Courtois expertly saved a Roger Martí penalty kick in the 64th minute to keep his side in it, but Martí wouldn’t be denied in the 78th minute, popping the ball up to himself to smash home the winner.

The loss means Barcelona could overtake Real Madrid for second place in LaLiga with a win over Athletic Bilbao on Sunday. Atlético Madrid could go 10 points clear of them both by beating Cádiz.

And Zinedine Zidane will know the Éder Militão red card was the primary reason for defeat.