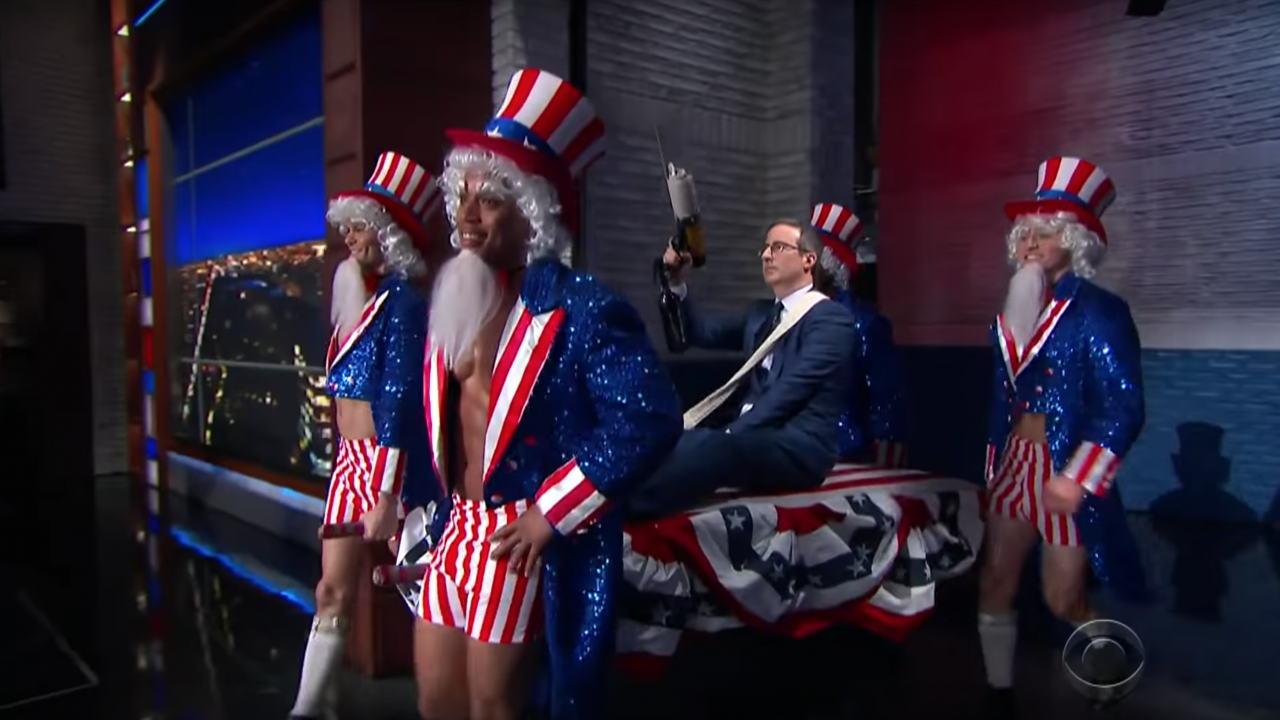 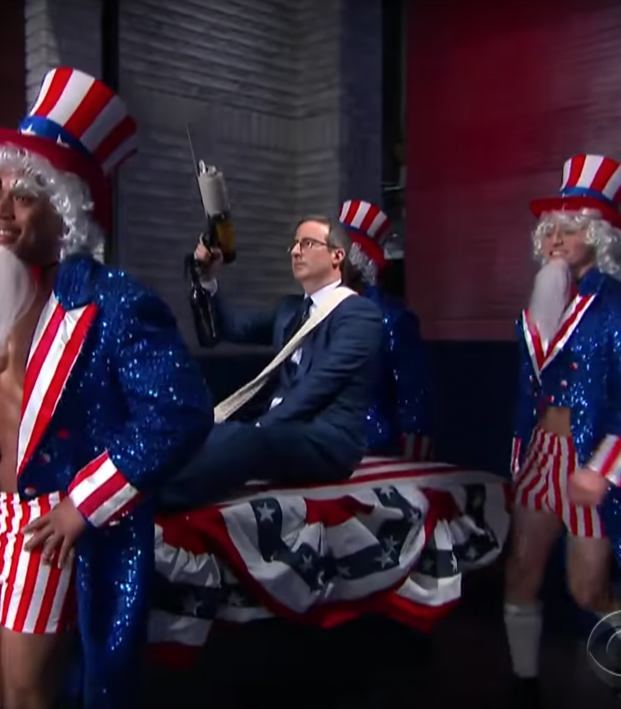 John Oliver, a proud Liverpudlian, is now a U.S. citizen. The comedian and former The Daily Show correspondent is about to start his seventh season of his hit HBO show “Last Week Tonight.” But all he really wants to talk about is his love for Jurgen Klopp and Liverpool FC.

Oliver was a guest on “The Late Show with Stephen Colbert” on Monday night, and it didn’t take him long to work in talk about his favorite football team and the magical season the Reds are having — even if Colbert wanted to force him to say “soccer.”

After coming out on a litter carried by four scantily clad Uncle Sams while shooting T-shirts out of a T-shirt cannon, Oliver worked Liverpool into the conversation before the first break. (A former colleague of Colbert’s, Oliver was on for three full segments.)

At the end of the first segment, as Colbert was asking about British patriotism in light of Brexit, Oliver said such feelings usually come out during England national team matches. This was a segue into what Oliver really wanted to discuss, Liverpool, the first mention of which drew cheers from audience members.

The dual citizen then, without prompting, described his first match at Anfield.

“I love Liverpool so much that the first game that my dad ever took me to, I was 8 years old, and I made him let me wear my full Liverpool kit and socks, shin pads and cleats under my regular clothes,” Oliver said, starting around 6:45 in the video below. “Because my rationale at that age was if someone got hurt and they ran out of players they might just turn to the crowd to say, ‘Does anyone have the necessary equipment to participate?’ And I’d be like ‘I do; I’ve come prepared! I can do it! I have little enough sense of consequences to think this might go well for me!’”

Now as a graduate of Texas A&M, I cannot legally mock someone for expressing the hope that one would be called into a sporting event from the crowd. Texas A&M’s entire football ethos is built around the legend of a fan being brought from the crowd to suit up and sit on the sideline during a football game. That said, we don’t wear pads under our clothes during games; that’s just weird.

Regardless, we love Oliver’s admiration for his boyhood club. When Oliver was 8, Liverpool was in the midst of a dominating decade that included seven English league titles in 11 years. Alas, the last time Liverpool won a league title, Oliver was 13, meaning the Texas A&M Aggies have won as many English league titles in the last three decades as Liverpool. Oliver is undoubtedly excited about the prospect of that streak coming to an end this year, which will surely happen sooner rather than later.

After the first commercial break, Colbert immediately jumped into the soccer vs. football debate. Personally, I don’t give any fucks which you use and anyone who argues it should be one way or the other doesn’t really love the game, and clearly Colbert does not love the game (or any sports, for that matter).

After a brief aside to talk shit about Canada, Colbert asked Oliver about the season Liverpool is having. Oliver immediately jumped into how much he adores Jurgen Klopp, even though he admits charismatic Germans should, based on past history, be treated with care. Oliver was giddy when he retold the story of Klopp’s press conference before the second leg of the Champions League semifinals against Barcelona, where facing a 3-0 deficit Klopp said his team might lose, but they would try to “fail in the most beautiful way.”

“That concept just hits me where I live,” Oliver said. “Fail in the most beautifil way is a poetic thing to come from a sporting coach. He’s an amazing man.”

The final segment of the interview didn’t include any soccer talk, but it did feature a photo of John Oliver as a 14-year-old, so it’s worth watching. Most notable from the segment was Oliver admitting his first-ever crush was Eeyore from “Winnie-the-Pooh,” because damn, he’s got dumps like a truck.

“Last Week Tonight” with John Oliver returns this week, so it’s time to dust off your parents’ HBO password you forgot since “Game of Thrones” ended to immerse yourself in 20-minute deep dives into medical devices, Brazilian elections and Gurbanguly Berdimuhamedov.