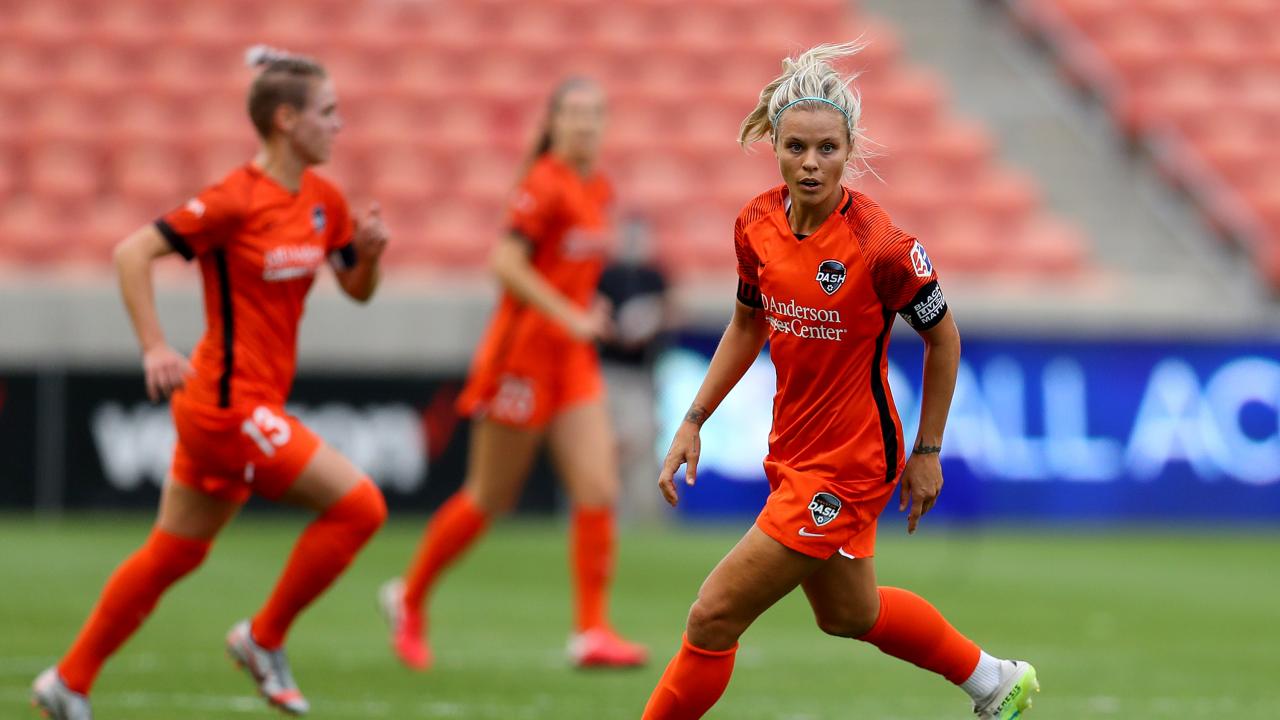 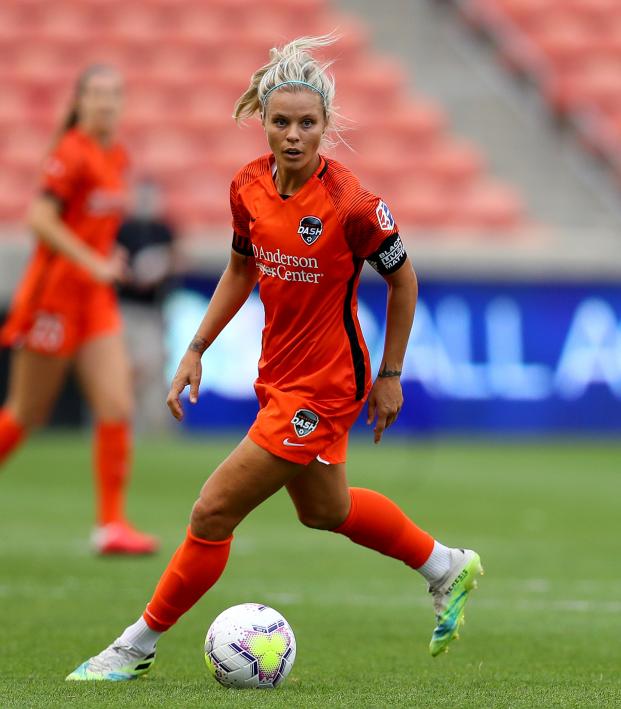 In Many Respects The Least Interesting Team In NWSL History, This Houston Dash Team Deserves Some Damn Credit

In eight seasons of the NWSL, there hasn’t been a team less interesting than the Houston Dash. Yet a team no one seems to want to play for is one win away from winning the 2020 NWSL title, and for that the players and staff deserve some credit for the first time in team history.

The Dash face off against the Chicago Red Stars in Sunday’s NWSL Challenge Cup final. This month-long tournament in Utah, which is replacing the normal NWSL season and postseason, has had its share of ups and downs but will reach a crescendo at Rio Tinto Stadium with a national broadcast on CBS.

It’s hard not to get excited for the game, even without Roger Bennett and Alex Morgan narrating hype videos.

A message from @AlexMorgan13 and fans everywhere.

Few could have predicted the Red Stars and Dash would be in the final. The N.C. Courage thoroughly dominated the group stage, but the only team to finish the opening four matches with a positive goal difference was upset in the first knockout round. While the Red Stars were in last year’s final (a 4-0 loss to the Courage), they won just one group-stage match, scoring two goals in four games. Chicago squeaked by the OL Reign in a shootout in the quarterfinals and held off Sky Blue FC 3-2 in the semifinals.

And then there’s Houston, arguably the worst team in the history of the NWSL, certainly the most ignored.

The Dash have never finished a season with a winning record, let alone qualified for an NWSL postseason in their seven-year history. From the very start as the league’s first expansion team, the club has never had star power on its side. There’s no Alex Morgan, Sam Kerr, Julie Ertz or Marta in Dash history.

For whatever reason, USWNT stars don’t care for Houston.

The Dash acquired Carli Lloyd following the 2014 season, before she became a household name for her heroics at the 2015 Women’s World Cup. But the dynamic USWNT player was a complete dud for the Dash, scoring 11 goals in 27 appearances over three years. During that same time period, Lloyd scored 46 goals for the USWNT. Clearly this was a case of a player who just didn’t give a fuck about Houston.

In 2018 the Dash shipped Lloyd off to Sky Blue in a three-player mega-trade, the likes of which would’ve broken ESPN talking heads if ESPN gave any shits about women’s sports. Chicago got Sam Kerr, one of the best goal scorers in the world while Houston acquired Christen Press, a marketable USWNT star even if she’s not a regular starter.

But Press refused to play for the Dash, instead opting to sign for Göteborg FC in Sweden. The Dash, therefore, traded one of the league’s best assets and got absolutely nothing in return. Press, meanwhile, rejoined NWSL with expansion-club Utah after one year abroad, with Houston not receiving a damn thing in compensation while Chicago received one player and five draft picks for Press’ rights.

No wonder the Dash have never made the playoffs.

In spite of all of this, the Houston Dash have persevered as a club, albeit with severely dwindling attendance as the club struggles to market itself without any major stars.

As the only club in the NWSL without a full-time USWNT player, Houston created its own star. Through her own talent, leadership and charisma (and aided by her relationship to Houston Texans star JJ Watt), Kealia Ohai Watt became one of the league’s more popular players, even if she is mostly ignored by the national team setup (and Fox).

But once she became a star, Watt too wanted out. She requested a trade before the 2020 season and ended up in Chicago. While Katie Naughton, who the Dash received from Chicago, has proven a stalwart defender, it once again left the Dash without any way to draw in casual fans.

Which brings us to the 2020 Houston Dash, a team with a bunch of good players but no superstar. It might just be this makeup that allows the squad to win the NWSL Challenge Cup.

With no Carli Lloyd, no Christen Press and no Kealia Watt, James Clarkson’s Dash team is loaded with journeywomen like Katie Stengel, Shea Groom, Christine Nairn and Kirstie Mewis, who with 15 caps has more USWNT appearances than anyone on the team.

Groom, who was a star in college in Texas at Texas A&M, has been a revelation in the Challenge Cup, with two goals and an assist. The lithe midfielder has brought an energy and swagger to the Dash midfield in her first season with Houston. Jane Campbell, who might just be the best PK stopper in the league, has come up huge in the Challenge Cup, stopping two shots in the quarterfinal shootout again Utah. Canada national team regulars Nichelle Prince, Sophie Schmidt and Allysha Chapman have been the team’s backbone, a much-needed steady presence. Players like Nairn, Mewis, Brianna Visalli and Naughton have proven they want it more than the other team, which has proven to be so vital in such an unusual tournament.

While many other teams were hit by big-name absences, like Megan Rapinoe, Morgan, Lloyd and Press, the Dash didn’t have to worry about superstars opting out. Everyone on the team has something to prove and worked every minute of the elongated offseason to stake their claim.

And then there’s the biggest, perhaps only somewhat big name on the Dash roster, Rachel Daly. In many respects, Daly epitomizes this Houston team — versatile, hungry and talented.

Daly, who was born in England, played with Leeds United for a couple years (she even won a League Cup in England) before coming stateside to play college ball with St. John’s. She became a Red Storm legend, scoring 50 goals in 60 appearances, setting herself up to be the sixth pick in the 2016 NWSL draft by the Dash.

Daly plays both offense and defense, and not in the sense she’s a midfielder. She plays fullback for the England national team and striker for the Dash. She can play anywhere on the pitch, but with Houston she’s given a No. 9 role, one in which she’s thrived. Daly has three goals and an assist for Houston, including the header that sent the Dash into the final on Wednesday.

While other teams have their USWNT stars, Daly, an Englishwoman named captain after Watt left, has been the heart and soul of the Dash, and was named Challenge Cup MVP on Saturday. In doing so, she’s helped popularize the NWSL in England as one of the few Three Lionesses players to play in America. She’s also helped bring a bit of light to Houston, a city that’s been devastated by the Covid-19 pandemic thanks to a governor who cares less about the Bayou City than Carli Lloyd.

Altogether, the Dash have done just enough to get to the Challenge Cup final, where they’ll have to face their former captain, not to mention USWNT stars like Ertz and Alyssa Naeher.

Is Houston’s motley bunch of footballers the best team in NWSL? Over a full season and normal playoffs, probably not. But during a shortened tournament, the Dash have shown themselves to be more than deserving of being crowned NWSL champions on Sunday.

At the very least, the team no one seems to want to play for deserves some damn respect.