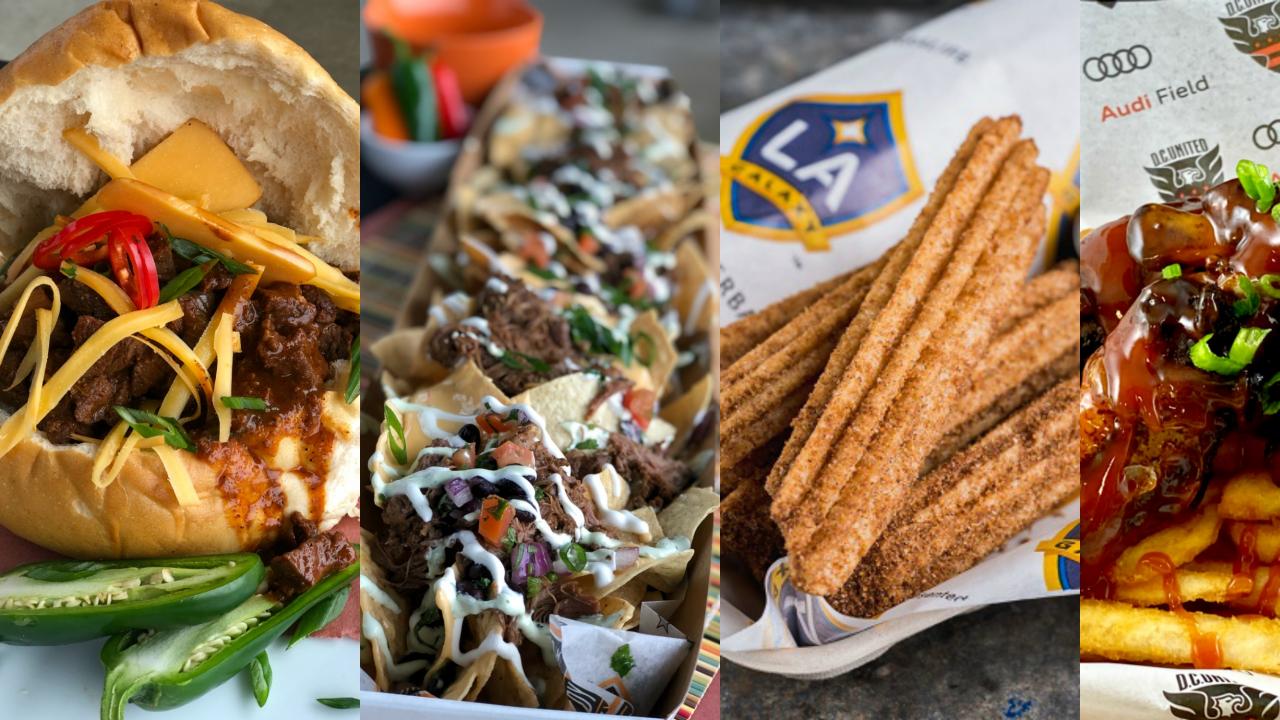 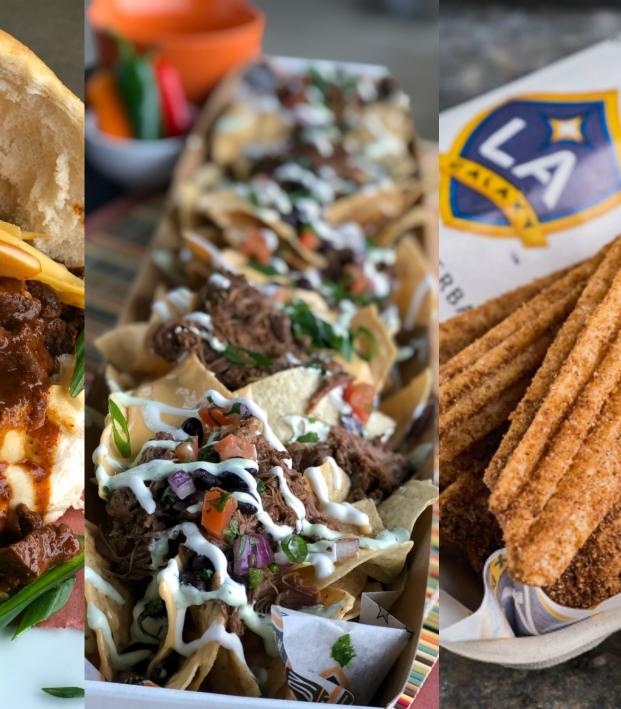 One of the best parts about attending a sporting event in the U.S. is the food. Unlike Europe, where they serve shit no one actually likes (prove I’m wrong), American stadiums are a Mecca of gluttonous foods and drinks. MLS stadium food is no different.

The best way to learn a city is through its food. One of the best ways to learn a city’s food is through the sporting arenas where thousands of fans gather every week. Nowhere is this more evident than at MLS stadiums, where food ranges from two-foot-long nachos in Texas to roasted cauliflower nachos in California.

For years, baseball stadiums have been home to the most decadent foods in U.S. sports (because what else are you going to do at baseball games, watch baseball?), but MLS is catching up. As Major League Soccer’s 25th season kicks off, we wanted to highlight the best MLS stadium food for each of the 26 clubs.

Mercedes-Benz Stadium has become a fan favorite because of its fan-friendly concession prices. But the stadium, also home to the Atlanta Falcons, has some great specialties on offer as well, including the Butter Lemon Pepper Wings and Shrimp Po’ Boy.

When you're still full from Thanksgiving but you also just want an Italian beef... pic.twitter.com/4trJ3JKh5J

With the Chicago Fire moving back into Soldier Field for the 2020 season, Bears fans are well aware of the treats on offer at the iconic venue. From sweets like old-fashioned donuts and churros to savory pizza and gyros, Soldier Field doesn’t skimp on concessions.

Unfortunately, the Fire have yet to confirm which concessions will be open during MLS games this season (the home opener is March 21). So we’ll reserve judgment until we find out what all the stadium will offer. Until then, we can only suggest tall boys of Miller Lite.

Two of your favorite things will be at Nippert Stadium for the first time ever tonight! See you for #CINvIND. #JoinTheMarch pic.twitter.com/lh7MBkf4Ok

The 2020 season will be FC Cincinnati’s second and final campaign at Nippert Stadium before moving on to West End Stadium.

We can’t wait to see what the new digs will offer, but until then, you know you can get plenty of Rose Lavelle-favorite Skyline chili at Nippert Stadium.

If you live in the Denver area, getting out to Dick’s Sporting Goods Park out in Commerce City can be a bit of a chore. Fortunately, because it’s still technically Colorado, there’s plenty of craft beer available that will make any food you order taste just fine.

This is actually a pretty good rule of thumb for all food in Denver: It’s fine and only becomes good with beer.

The Crew won’t be in Mapfre Stadium too much longer, but the venue holds a special place in U.S. soccer history as MLS’s first soccer-specific stadium. So if you make it out to Mapfre this year, be sure to appreciate the venue’s history with some of the fine fare on offer.

One of the newer venues in MLS, Audi Field served more than 21,000 hot dogs and nearly 16,000 pupusas in its first full season in 2019. While hot dogs are nice, we suggest going with the Smoked Mambo Wings.

The DFW Metroplex has plenty of competition for the best stadium food, but Toyota Stadium holds its own. One of the best features in the stadium is the Away Stand, which changes its menu based on the opponent.

You’ll want to wash it all down with some of the signature cocktails available, such as the Penalty Punch, a cherry limeade margarita that will go perfect with your sunburn in the shade-starved stadium.

It should be no surprise to anyone who’s ever been to Houston that the city’s soccer stadium has giant nachos on offer. Last year BBVA Stadium served 560 gallons of cheese for 16,000 orders of nachos, and it’s no wonder with 2-foot-long Ropa Vieja nachos. If nachos aren’t your speed, which means we can’t be friends, the chili bread bowl will certainly hit the spot.

The Classic Watermelon Margarita is just the refreshing drink you want for those hot, humid evenings in the Bayou City.

The team just launched and has yet to host a match, so we can’t comment on the food just yet. David Beckham’s club has sold out its home opener against the LA Galaxy on March 14, so perhaps then we’ll know if the stadium’s food is any good.

Whether you want some slightly healthier nachos or some far-from-healthy desserts, Dignity Health Sports Park has you covered. It’s impossible to say no to churros, especially when you add chocolate and marshmallows.

To drink, micheladas are one of the most popular options after beer, with more than 25,000 having been served in 2019.

The newest culinary destination in Los Angeles, right next to @BancStadium.

Come by The Fields LA tomorrow before our match.

If you’re checking out LA’s hottest team, make sure to stop by Fields LA, which features nine different vendors each with its own style. From C.J. Boyd’s Fried Chicken to Piccolo Antico Pizzeria Focacceria, there’s something for everyone.

While not technically in Banc of California Stadium, Fields LA is open seven days a week, so you don’t have to wait for match day. But if you’re in the stadium, Seoul Sausage and The Roost are your best bets for good food and drink.

Minnesota’s new stadium is a beauty and the 60-foot bar in the Brew Hall simply can’t be beat.

Of course, with all that Surly beer, you’re going to get hungry. Fortunately, the stadium offers a wide variety such as burgers in the Brew Hall, Indian food, Elote, pizza and burritos and beignets, because everyone loves a good beignet.

Honestly, we couldn’t find anything interesting on the menu for Impact matches, so we’re just gonna move right along to the next club.

The other 2020 newcomer will open its official home in 2022, but until then Nashville SC is playing matches at Nissan Stadium, home of the Tennessee Titans. Based on the food available for the club’s debut match against Atlanta, we’re fine with Nissan Stadium for now.

If the pimento cheese and bacon on the TN Southern Burger don’t get you salivating, the Fat Bottom Brewery beer, with Nashville SC-specific brews, will do the trick.

The Revs desperately need their own stadium, but at least playing in an NFL stadium means there are plenty of concession stands.

Despite a large variety of concessions, even on MLS match days compared to NFL game days, there isn’t too much that stands out, so just drink plenty of Sam Adams.

NYCFC plays in one of the most iconic venues in the world. While it’s not exactly a soccer stadium, as an MLB park there is of course plenty of food variety available.

While Yankee Stadium has plenty of offerings from sushi to wings during NYCFC matches, you can never go wrong with a Nathan’s Famous hot dog at Yankee Stadium.

Check out these new additions to the #YankeeStadiYUM Menu this season! . . . #YankeeStadium

Our culinary team at @RedBullArena is ready for @NewYorkRedBulls fans with some new menu items.
Try the Spicy Chicken Sandwich or Loaded French Fries at The Fat Rooster (Sec. 124) or the Deep-Fried Brownie Bites at The Boardwalk (Sec. 126 & 226). pic.twitter.com/gIuG83DGga

Red Bull Arena, while not actually in New York, is loaded with food options. You’ll probably want to check out the fare from Delaware North locations like Tacos Roqueros, Fat Rooster and The Boardwalk.

You can’t go wrong with a spicy chicken sandwich on a Kings Hawaiian roll, but save room for deep-friend brownie bites at The Boardwalk.

If you’re at Exploria Stadium, you could go for the same old boring stuff like hot dogs, nachos and popcorn. Or you could head to City Bistro for empanadas or Esta Noche for Cuban Bowls.

If you’re in Philly for a match, you kind of have to have a Philly cheesesteak. Fortunately, the venue formerly known as Talen Energy Stadium has not one but two Tony Luke’s locations for all your cheesesteak desires. Chicken cheesesteaks are also available for the chumps out there.

Killer Burger: A variety of burgers will be available like the Classic burger, Peanut Butter Pickle Bacon burger, and our Park exclusive “Striker” burger

Come hungry and get your fill on match day with our variety of food, drinks and treats!

I don’t think we need to say anything more than Tillamook Bacon Queso Nachos.

But in case you’re one of those weirdos who doesn’t appreciate a good nacho, Zenner’s hot dogs and sausages are always a solid option at Providence Park, where fans are expected to consume 50,000 pounds of tubed meat in 2020.

Rio Tinto Stadium offers some of the best views in U.S. pro sports. As for the food? It’s hit or miss.

Fortunately, The Plaza, open two hours before matches and during halftime during matches, features a rotation of 3-5 food trucks, which is your best bet to get a good meal at the stadium.

Churwaffle and Chicken: With butter, maple syrup and hot sauce

GREAT NEWS: We're proud to announce new food and drink options, as well as other stadium enhancements ahead of tomorrow's Home Opener.

San Jose couldn’t get a stadium sponsor to replace Avaya in time for the 2020, but that’s OK because they’ve got churwaffles now.

Is it a churro? Is it a waffle? Does it matter? You can get your churwaffle with chicken, syrup and hot sauce, a hotlink and honey or more traditional with cinnamon, whipped cream and powdered sugar.

Sunday's @Seahawks game is going to be a rainy one and what better way to warm up than a Beecher's grilled cheese and soup! #CLFeats pic.twitter.com/UpAJyke4rK

Our favorite thing about the concessions at CenturyLink Field is the value menu, which offers fan-friendly prices on everything from popcorn ($2) to craft beer ($7). The reigning MLS champs have some great combo deals that will save you some money, such as the Full 90 Combo — two hotdogs, one popcorn and two waters — and the Grilled Cheese and Soup Combo, both for $12.

Grab a Road Hoss, Funky Chicken or Beyond Burger above section 129 all season long.

The first of many local eats available in 2020

BBQ and giving back to the KC community. We're in.

Burnt ends, brisket and pulled pork available each #SportingKC match - with a portion of the proceeds donated to @AmericanRoyal.

When it comes to food in MLS cities, Kansas City is no slouch. Children’s Mercy Park revamped the concessions menu for 2020, focusing on local foods, starting with BRGR Kitchen + Bar and Taco Republic.

BRGR features the Road Hoss but don’t sleep on American Royal Barbecue’s Burnt End Nachos, because if you haven’t figured out by now, we love nachos.

Canadians don’t always follow the American trend of fatty foods, but Toronto FC makes a few exceptions. Stop on by Real Sport at the Game for the Big Boy Double Burger or Panini for the Honey Smoked BLT.

For something slightly healthier, check out Frites for Belgian-style fries in a variety of styles including spicy chicken, kimchi, chili or nacho.

The Vancouver Whitecaps may not be all that interesting since Alphonso Davies left for Bayern Munich, but that doesn’t mean BC Place isn’t an interesting place to attend a match.

Whether it’s the Bacon Jalapeno Chicken Burger from Lionsgate Grill or the Shrimp Tacos from Beast Unleashed, there’s plenty to like.

Last year, Boom Kitchen! made a Rainbow Grilled Cheese Sandwich for the annual Pride Match, which may just be the coolest item on this entire list.