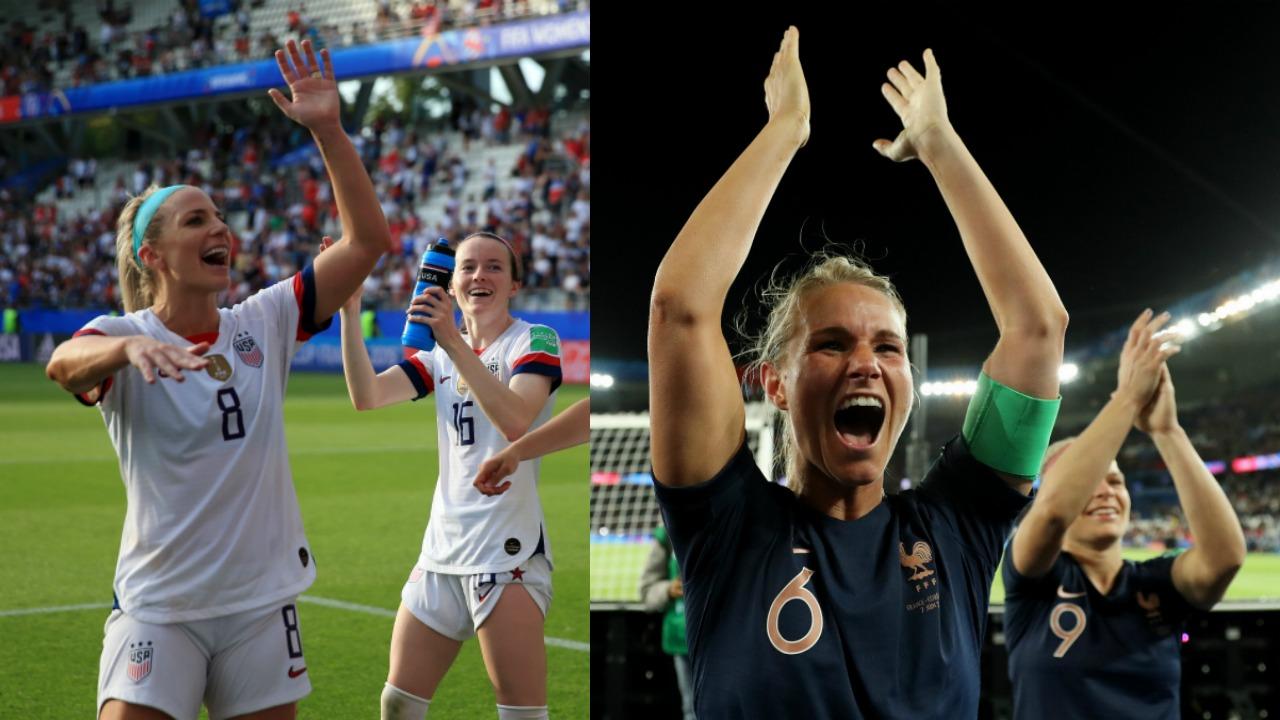 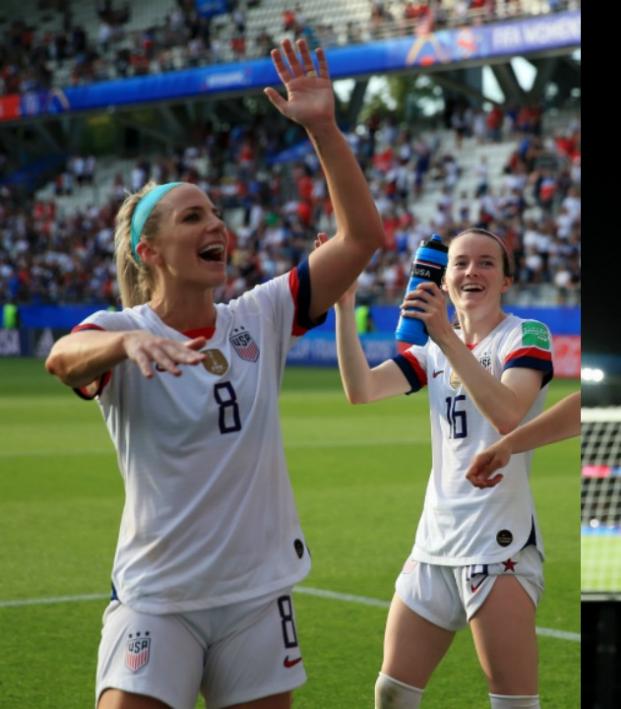 Friday. On Friday, you don’t work. On Friday, you watch perhaps the most anticipated match in the history of the Women’s World Cup. The USA vs France World Cup 2019 predictions, previews and general hype train is building to a crescendo, like a Marta message to the children.

There’ll be nearly 50,000 inside the Parc des Princes for this quarterfinal, and a rumored even-split between U.S. supporters and French nationalists will create a cauldron of noise that’s likely to deliver on the “total shitshow circus” that Megan Rapinoe desires.

Here’s The18’s preview of the match, including information on how to watch, as well as team previews, tactics and a prediction.

The Road To The Quarterfinals

The U.S. began group play with a historic 13-0 victory over the world’s 34th-ranked side, Thailand. After cruising to a 3-0 halftime lead, the Americans poured it on in the second half with 10 goals, and although some of the player celebrations that greeted the later goals led to criticism both at home and abroad, a clear message was sent to the rest of the field following the largest margin of victory in World Cup history.

Jill Ellis rang in the changes for the second group match against Chile, effectively calling in the squad’s B team (although this collection of reserves still probably constitutes the world’s second-best team). Again, the USWNT cruised to a 3-0 halftime lead, but the story of the match was Chilean keeper Christiane Endler, who preserved that losing scoreline despite seeing her team get outshot 26-1.

The third and final group-stage match was against Sweden, and with both teams already qualified for the knockout round, the match was something of a nonevent — even with FOX hellbent on the 2016 Olympic narrative — following Lindsey Horan’s goal in the third minute.

The U.S. ended group play without conceding a goal and having recorded a record haul of 18. However, the utter absence of any sort of challenge — apart from Chile’s keeper — certainly seemed to work against the U.S. in the Round of 16.

Against a Spanish side competing in the knockout rounds for the first time ever, the U.S. had to rely on two Megan Rapinoe penalties to win 2-1. The second, earned by Rose Lavelle after feeling the faintest of fouls in the box, was a massive reprieve in the 76th minute with Spain somehow starting to exert dominance.

After putting 20 shots on target against Thailand and nine against Chile, the U.S. only managed four against Sweden followed by just two against Spain. The worry then, from an American perspective, is that they’ve “been found out,” but what exactly does that mean?

The U.S. spent a lot of the Spain match with the center back pairing of Becky Sauerbrunn and Abby Dahlkemper on the ball. By pushing forward its defensive and midfield lines and with Jennifer Hermoso operating as a false nine, Spain hugely restricted the USWNT’s ability to connect those ball-playing center backs with players further forward.

Sauerbrunn and Dahlkemper were unable to break the initial line by finding Samantha Mewis and Rose Lavelle, and even when Julie Ertz received possession in the holding role, she was unable to frequently get it to the feet of the U.S.’s midfield creators.

USWNT's pass map vs. Spain in the Round of 16. Photo: @WSOCViz | Twitter

There was a disjoint, resulting in a lot of hopeful balls from Dahlkemper in search of Alex Morgan, but Morgan was unable to really do anything with them. The U.S. striker complained a lot about the physicality of the Spanish defenders in dealing with these long balls, but if you’re going to play that direct, you’re inviting a physical battle — it just so happens that Spain won that battle time after time.

Accordingly, many want to see Carli Lloyd introduced for Morgan. Megan Rapinoe has also been far from her best in France, and there’s a general sense that Christen Press could be introduced to both provide a spark on the left-hand side and to do more defensive work.

While it’s true that Crystal Dunn has a tendency to tuck inside at left back, she’s also been somewhat forced to do as much because of Rapinoe’s freedom further forward and because of Samantha Mewis’ need to create from a more central position. If Dunn doesn’t tuck inside, there’s a massive risk that the 34-year-old Sauerbrunn is beat with pace on that inside channel.

The Road To The Quarterfinals

France kicked off the World Cup with the curtain raiser at the Parc des Princes (the scene of this quarterfinal match). With nearly 50,000 in attendance, nerves could’ve stymied Les Bleues, but three first half goals set the stage for a 4-0 victory. The match showcased the tournament’s tallest player — the 6-2 Wendie Renard converted two headers — and the overall brilliance of captain Amandine Henry (a beautiful assist and a thunderbolt of a goal).

The second match against Norway (a quarterfinalist as well) was hardly smooth sailing. With France leading 1-0 early in the second half, a comical Renard own goal quieted the crowd in Nice. However, with the help of the VAR, Eugénie Le Sommer converted a 72nd-minute penalty to give France all three points.

The third match against Nigeria was a very similar story. In a match that produced few chances of note, VAR again came to the fore in the 75th minute when the ref took another look at Ngozi Ebere’s challenge in the box on Viviane Asseyi. After review, Ebere was sent off and Renard stepped forward to take the penalty. She missed, BUT, VAR confirmed that Nigeria keeper Chiamaka Nnadozie had stepped off her line, and Renard was given a second chance. She converted this one for the win.

Up next was a battle with South American power Brazil in the Round of 16. France appeared to have the opener in the 23rd minute, but after the referee checked the monitor, she ruled that Valérie Gauvin had fouled the keeper. Frankly, it was a bullshit call. Gauvin would later convert in the 53rd minute, but Brazil would answer back through Thaisa only 10 minutes later. We went to extra time, where the story was a sensational goal-line clearance by France’s Griedge Mbock at one end, followed by a cool Henry winner at the other.

The strength of this French side is the spine of center halves Renard and Mbock with central midfielders Henry and Élise Bussaglia ahead of them. That block gives France perhaps more solidity than any other nation in this tournament, but do they have enough firepower and cohesiveness going forward to trouble the U.S.?

So much of what France does in transitioning from midfield to the attacking third goes through Henry. Shut down Henry and you nullify France’s first plan of attack, but one does not simply shut down Amandine Henry.

France's pass map against Brazil in the Round of 16. Photo: @WSOCViz | Twitter

Up top, both Kadidiatou Diani and Gauvin provide the running and selfless pressing that could disrupt the passing of Dahlkemper while providing a headache for Ertz with regards to her defensive position while shielding the backline.

For all the questions asked of America’s defense on the left-hand side, the same question can be asked of France. Left winger Le Sommer is given free rein to create something magical and left back Amel Majri, naturally more of a winger herself, pushes forward to aid Le Sommer in that quest. How they adapt to the presence of Tobin Heath and Lavelle on that flank could decide the match.

There’s no reason to think that both these sides won’t genuinely believe that they can play their own game and hurt the other. France, of course, did as much back in January during a 3-1 friendly victory over the States (although the U.S. starting XI in that match was largely experimental). Still, Diani’s brace in that game still points to the weaknesses in America’s 4-3-3, and it’s difficult to imagine the U.S. keeping a clean sheet in this one.

However, France has been tested and conceded in games against Norway and Brazil, and this is a completely different animal. Lavelle has menaced throughout this tournament and should be killer in this one, either by creating chances or converting them herself.