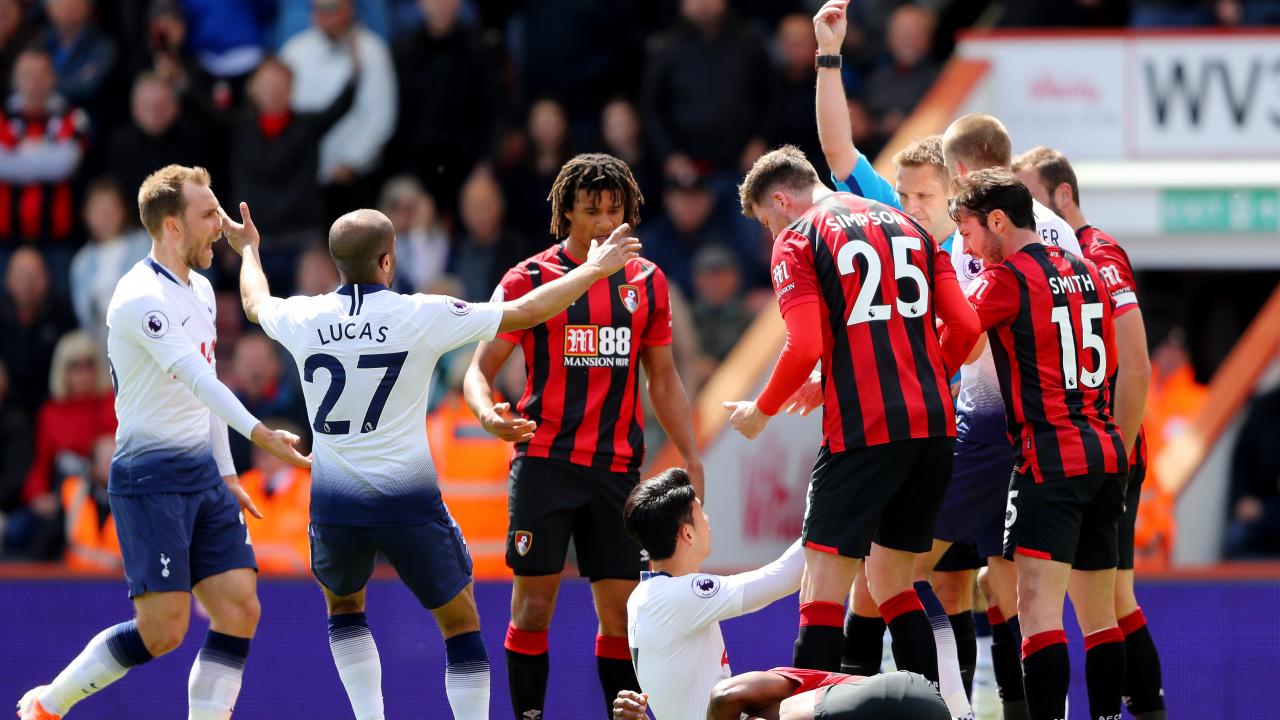 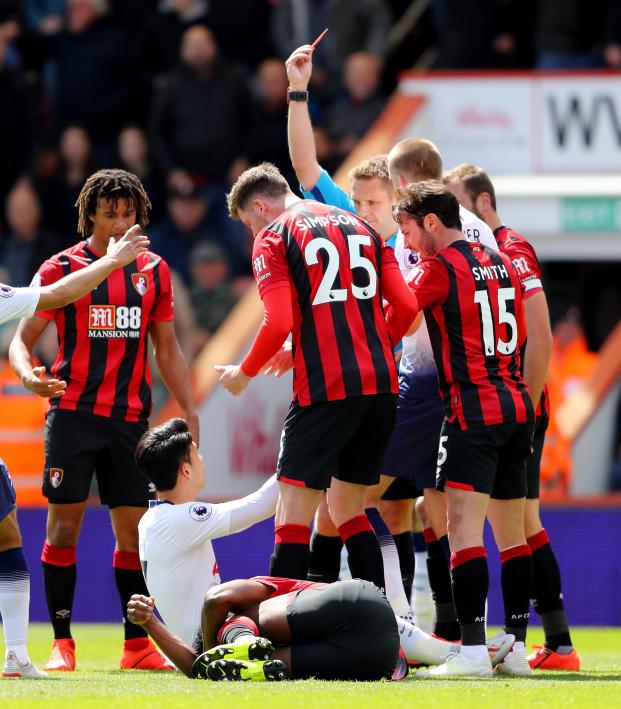 Travis Yoesting May 4, 2019
Tottenham played almost half the game with nine men in a 1-0 loss to Bournemouth.

Tottenham went into Saturday’s match against Bournemouth joint fewest red cards earned in the league; Spurs ended the match joint sixth in most red cards received. Two Tottenham red cards spelled doom for Mauricio Pochettino’s side in a 1-0 loss to Bournemouth on Saturday, once again opening up the race in for the top four.

Tottenham remained two points ahead of fourth-place Chelsea and, crucially, four points ahead of fifth-place Arsenal (and five ahead of Manchester United in sixth). Spurs could have ensured qualification for the Champions League with a win, but the team fell apart with two unnecessary, shocking red cards.

Worst of all for Spurs fans, a win would have ensured their team would finish ahead of Arsenal in the Premier League standings for a third straight season (which will probably happen anyway once Arsenal chokes against Brighton on Sunday).

The match actually started brightly for Spurs, who had plenty of chances to go ahead. But Mark Travers, in his first career start with the Cherries, kept the visitors out with a string of strong saves.

It's his first start for Bournemouth and Mark Travers is making his mark!

Then things fell apart for Tottenham.

Eric Dier was a bit fortunate not to pick up a second yellow in the 34th minute and could’ve given away a penalty a couple minutes later, but Spurs didn’t stay at 11 men for much longer.

In the 43rd minute, just before halftime, Son Heung-min had a brief moment of madness, shoving Jefferson Lerma to the ground to earn his first career Premier League red card. The South Korean, usually an affable, likable young man, lost his mind for a moment and it could cost Spurs this season (assuming the others in the race for the top four actually decide to start winning again, which they probably won’t).

While shoves don’t always earn red cards, Son can’t complain too much about the decision, especially since Dier was still on the pitch.

It would only get worse for Tottenham.

Just a couple minutes into the second half, after Dier and Toby Alderweireld were taken off for Victor Wanyama and Juan Foyth, respectively, to prevent either from picking up a second yellow card, Foyth did one better.

In the 48th minute, Foyth was shown a straight red card for a horrific, high tackle on Jack Simpson.

That really was an awful challenge, reminiscent of the one that saw Kylian Mbappé earn a three-game suspension last week. Again there can be no complaints about the decision, although earlier this season Danny Rose managed to stay on the pitch after shoving his cleats into the chest of Bernd Leno, so maybe some Spurs fans will complain that the referee didn’t botch the decision.

On the pitch for just two minutes and 13 seconds, Foyth picked up the fastest red card for a substitute since Steven Gerrard was sent off after being on the pitch for 38 seconds against Manchester United back in 2015.

Down to nine men, Spurs actually kept the match scoreless until stoppage time. Bournemouth, out of relegation danger and without much more than pride to play for, found a winner in the 91st minute through Nathan Aké.

On the bright side for Spurs, they still control their own destiny in the top-four race, knowing a win in their final match against Everton will ensure qualification for the Champions League. Plus, Son and Foyth won’t be suspended for their Champions League semifinal second leg against Ajax. Son missed the first leg for yellow card accumulation.

But after losing the first leg 1-0 at home on Tuesday, the season isn’t ending well for Tottenham.