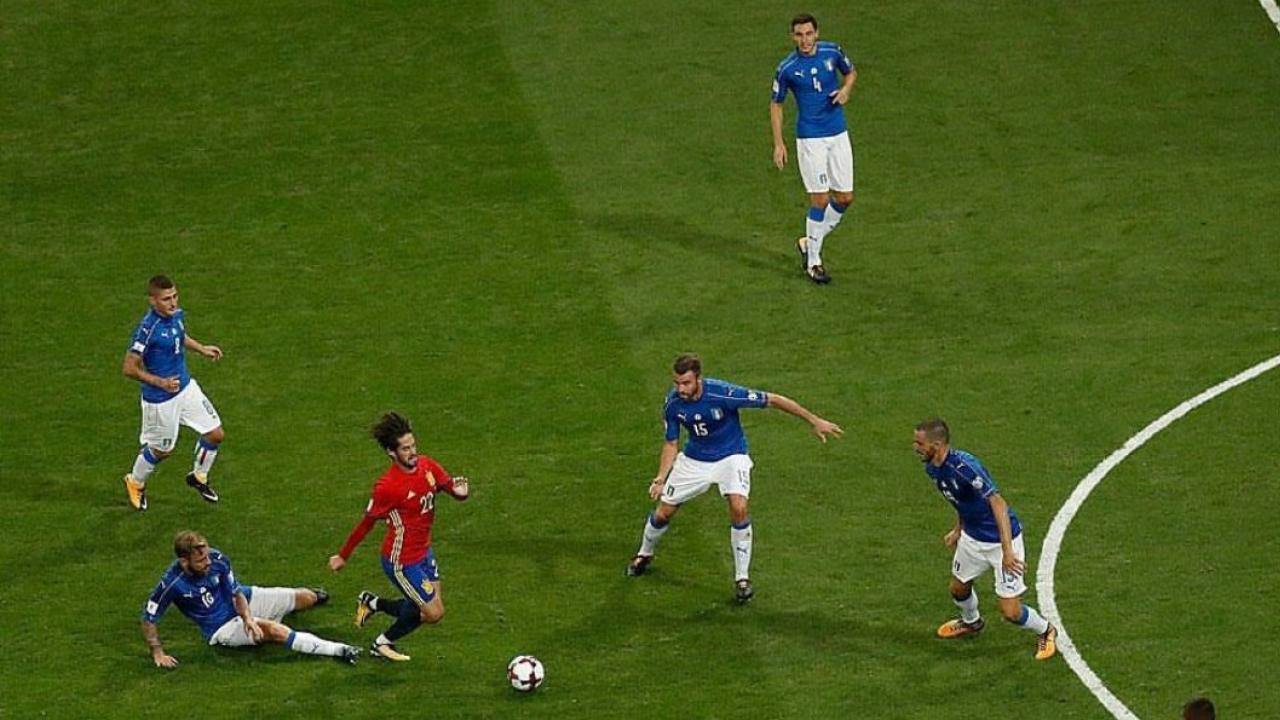 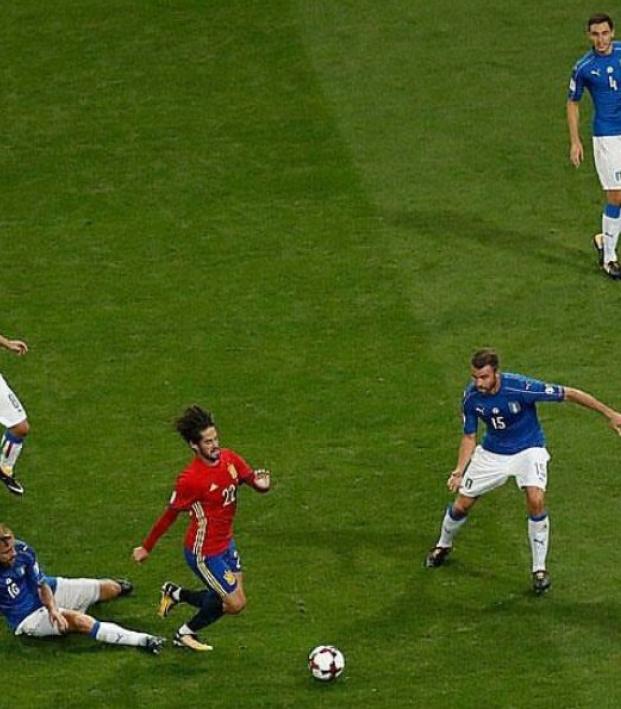 This past Saturday, Spain hosted Italy in a World Cup qualifier at the Bernabeu in Madrid. Both sides have won the competition in the post-millennial age and can justifiably feel bitter about being drawn in the same group. Italy, who have a well-established tradition of being utterly awful in the qualifying rounds of international tournaments yet miraculously not losing, are now at risk of finishing second in the group. To do so would complicate the process of getting to Russia in 2018, and there’s no getting around the fact that on Saturday, they were very, very bad.

There are plenty of things to criticize about the way Italy played against Spain, though it should be said early on that this was not the world-conquering Spanish side of years gone by. Though still possessing incredible quality, Spain are seemingly in the process of moving from one generation to another.

Andres Iniesta, though excellent on Saturday, is far from the player he once was. Other tiki-taka aficionados such as Thiago Alcantara and Cesc Fabregas did not start, while Sergio Busquets is in a particularly rotten run of form. Alvaro Morata is not yet trusted to start, the naturalized Diego Costa is busy with Diego Costa issues and the newly-bald David Silva is expected to start as a false nine.

Spain may have excellent players (and we’ll talk about them later) but they are not unbeatable. One need only look back a year to witness Italy against Spain at the European Championships, where the Azzurri won and won well. But that was an entirely different Italian side, so what’s changed since?

Perhaps the most crucial change has been the manager. There are questions to be asked about Antonio Conte’s management style but his performance with Italy at Euro 2016 was unquestionably excellent. That side – lamented as one of the worst Italian teams of all time – over performed to a huge degree. In doing so, Conte left the template for how this Italian team can play and left to join Chelsea.

Since then, Gian Piero Ventura has taken over as national team manager. Ventura, to put it lightly, is not as good at coaching football teams as Conte. Even allowing for the notoriously wretched performances of qualifying stages past, Ventura seems particularly ill-equipped to fashion a working team out of this generation of players. This was very evident on Saturday.

But aside from previous performances, Italy knew that they had to get something from the match against Spain. Ventura knew he needed something. Conte had laid down the Juve-style blueprint of three at the back and a fierce, combative spirit. None of that was evident in Madrid.

The midfield was swamped. The Spanish strength, for over a decade now, has been to establish technical dominance of the midfield. Iniesta and Busquets must have licked their lips upon seeing the line-ups. Aided by Isco, the best player on the night, they spent the entire game strolling through the center of the pitch and meeting no resistance.

This issue was compounded by the choice of midfielders. Ventura did not elect to stuff the center of the park with players and strangle the space out of the Spanish. Instead, he left the channels wide open, to be policed only by an aging Daniele De Rossi and the diminutive Marco Verratti.

Verratti is perhaps the only midfielder in the Italian squad who can measure up to Spain on a technical level, but he is dwarfed by Busquets. Tackling and running are hardly Verratti’s strengths and it’s reckless to leave him in so much space. It’s unfair on the player and exposes all of his flaws while playing to none of his strengths.

Next to Verratti, De Rossi showed why he is no longer a force to be reckoned with. De Rossi’s job, in theory, was to provide the running and physicality that Verratti could not. After being booked in the early stages of the game, De Rossi effectively neutralized himself. Given the dearth of central midfielders in the squad, there was no way to replace De Rossi and no way in which to bolster the central areas. Not that Ventura would have thought of that, as evidenced by his absence of any tactical acumen during the game.

Central midfield was not the only issue. Up front was just as much of a horror show. Ventura elected to play four attackers high up the pitch. Lorenzo Insigne, Ciro Immobile, Andrea Bellotti and Antonio Candreva were all deployed and, one Bellotti header aside, had little to show for their efforts.

Playing two strikers was not a good idea. The gap between the midfield and the attack was huge, bridged only by Candreva’s industrious runs from the wing. Bellotti’s harrying and energy were diminished by placing teammates so close, Insigne couldn’t get the ball to cut inside and Immobile was invisible.

Ventura tried to remedy this by bringing on Federico Bernardeschi and introducing some guile into the team. But his one good alteration was immediately undone by removing Candreva and Bellotti at the same time and bringing on Eder. Adding Bernardeschi in as a floating playmaker might have worked, had Ventura not destroyed any semblance of team shape at the same time and removed the two best Italian players, up to that point.

And then there’s the defense. The one mitigating factor in Ventura’s defense might be that Giorgio Chiellini was not available. As such, the Leonardo Bonucci-Andrea Barzagli-Chiellini set-up was not ready to be deployed. But rather than simply swapping out Chiellini for Daniele Rugani or another center back, Ventura elected to change formation entirely.

The fullbacks were static and unable to contribute in attack — the overrun midfield left them with too much to attend to in defense. Added to this, Gianluigi Buffon managed to have one of his worst performances in an Italian shirt, though how much was down to him and how much was down to the system was unclear. There were mistakes all over the pitch and, when the manager tried to correct these mistakes, he made things worse.

Jordi Alba was already celebrating Isco's free-kick vs Buffon as soon as the ball went over the wall. pic.twitter.com/0RHXlkzjzV

Furthermore, there was no plan to deal with the opposition. Isco was electric. Easily the best player on the pitch, he was afforded all the space in the world. He duly took advantage. Passing, moving, shooting and nutmegging Verratti: he was faultless. That Ventura had no response to Isco being so free and effective was damning. That no Spanish player was presented with a serious tactical problem to overcome was even worse.

The Spanish were simply allowed to do exactly what they wanted and the Italian coach made it all the easier for them to do so.

Isco with a savage meg on Verratti. #ESPITA https://t.co/OvH8NSPf0i

The result is not catastrophic. Italy was always going to struggle to win the group. However, the performance and the efforts of the coach were a searing indictment of Ventura as a manager. In the past, an Italian manager would not survive such an obvious display of ineptitude. Ventura may survive simply due to the lack of available alternatives and a generally ineffective regime in place at the Italian football federation.

There are plenty of ways in which to play against Spain. This performance by Italy was a fine demonstration of exactly what not to do.