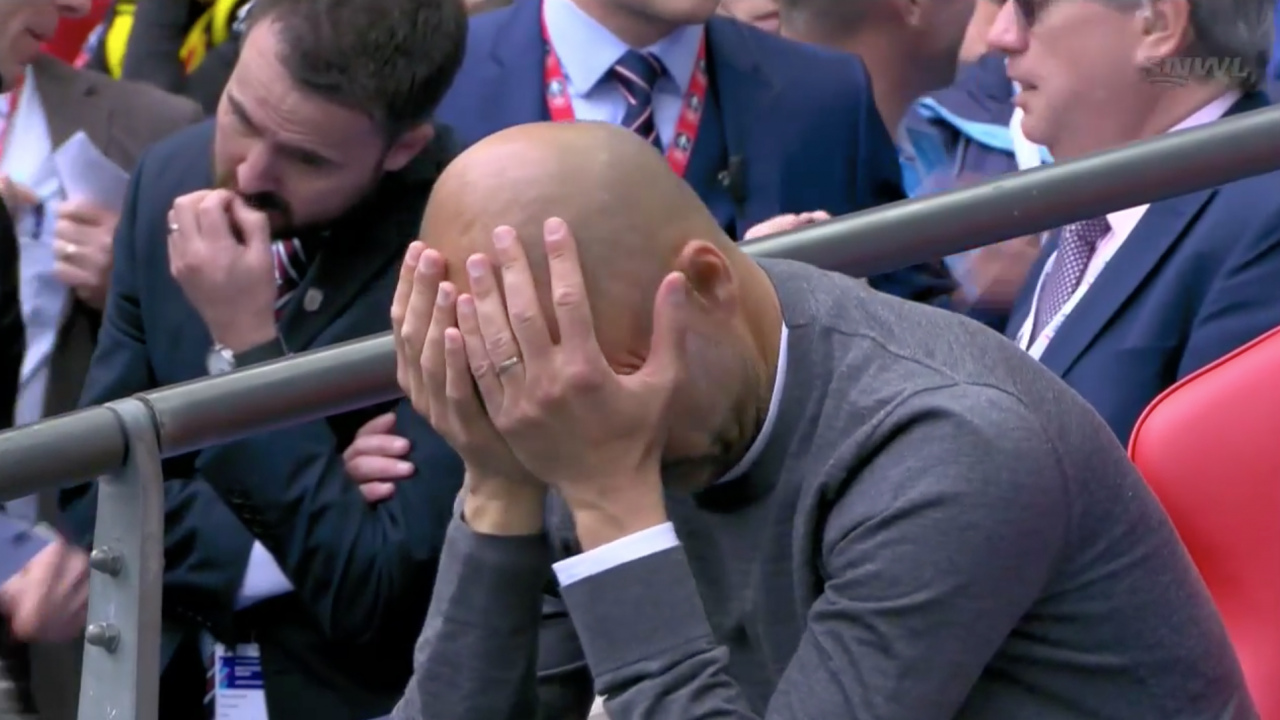 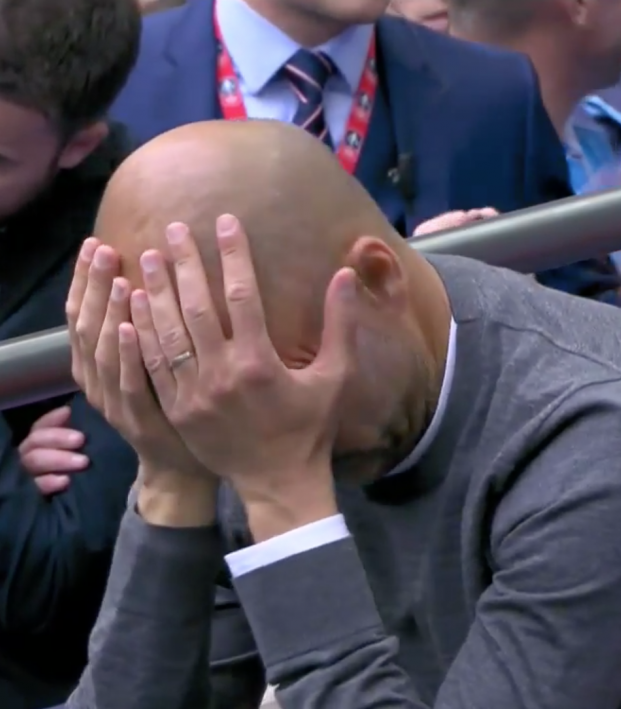 Manchester City demolished Watford 6-0 in the FA Cup final on Saturday at Wembley. It was an expected result and the Hornets were never really in it, even if it was just a two-goal game at halftime.

The win wrapped up a domestic treble (quadruple if you count the mostly meaningless Community Shield), the first ever in England.

So dominant were the Citizens that their coach, Pep Guardiola, was made extremely uncomfortable by the final score. After Raheem Sterling completed his hat trick to make it 6-0, Guardiola’s reaction said a lot.

Pep's reaction to his team going 6-0 up in the #EmiratesFACupFinal to seal a domestic treble  pic.twitter.com/gITPydgqZ9

Did Pep feel bad his team was making Watford look bad? Was he embarrassed to play in a cup final against such an inferior opponent? Did he put money on City to win 5-0? Personally, we felt the same way, only we reacted out of boredom, wishing City had a decent opponent in the final (not that Watford didn’t earn its way).

Who knows what exactly Guardiola was thinking, but he did lead his charges to a remarkable 2018-19 campaign, even if many in the English media have focused (rightly so) on the many misdeeds of City’s ownership in recent days.

What a moment for Pep Guardiola...

Even the most ardent of Watford supporters didn’t have much faith their team would win on Saturday and City dominated from the start.

David Silva scored the opener in the 26th minute to put the Citizens on their waltz to victory. You knew it was going to be a long day for Watford when David Silva outjumped a defender to help set up the goal.

David Silva fires into the bottom corner to give Manchester City the lead! 1-0! pic.twitter.com/N8XvU9UOxs

City made it 2-0 at the break when Sterling stole a goal from Gabriel Jesus, kicking the ball over the line when it should’ve been the Brazilian’s goal.

That ball from Bernardo Silva ...

Manchester City have a 2-0 lead at the half. pic.twitter.com/XFbkmpqQFF

Kevin de Bruyne showed composure on the hour mark to up the lead to 3-0 and the rout was on.

Kevin De Bruyne taps home from close range for his sixth goal of the season!

Sterling would add two more and Gabriel Jesus would get his goal in the 68th minute to cap an incredible season for Manchester City.

Sure, there was no Champions League glory (and there may not be any pending a possible UCL ban), but four trophies in one season ain’t bad.

But we’re still trying to figure out what Pep Guardiola’s reaction to Sterling’s third goal — and City’s sixth — was all about.

But maybe it had something to do with what Guardiola was explaining to Sterling after the match. Even after completing an historic season, Guardiola didn't stop coaching.

This sums Pep Guardiola up

Raheem Sterling has just scored a hat-trick in a 6-0 FA Cup Final win to complete a domestic treble...

And he still gets a passionate lecture from his boss. Relentless pursuit of excellence. pic.twitter.com/shKIOIAjie