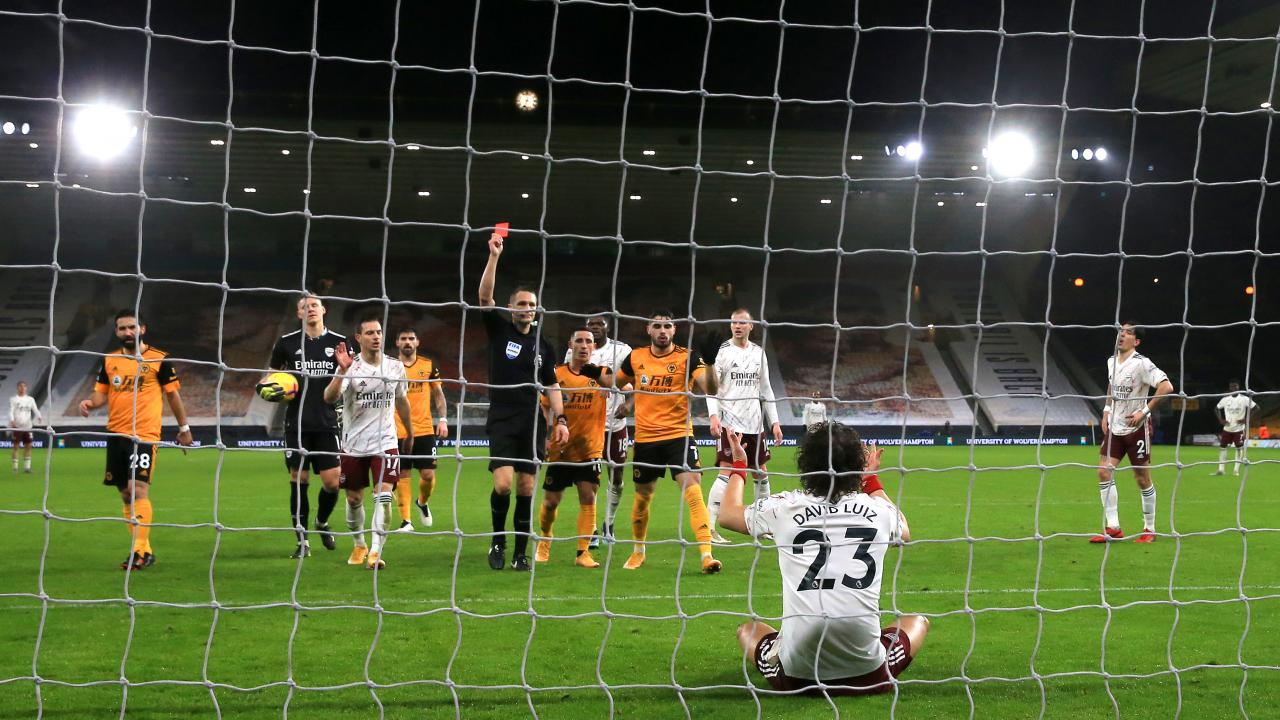 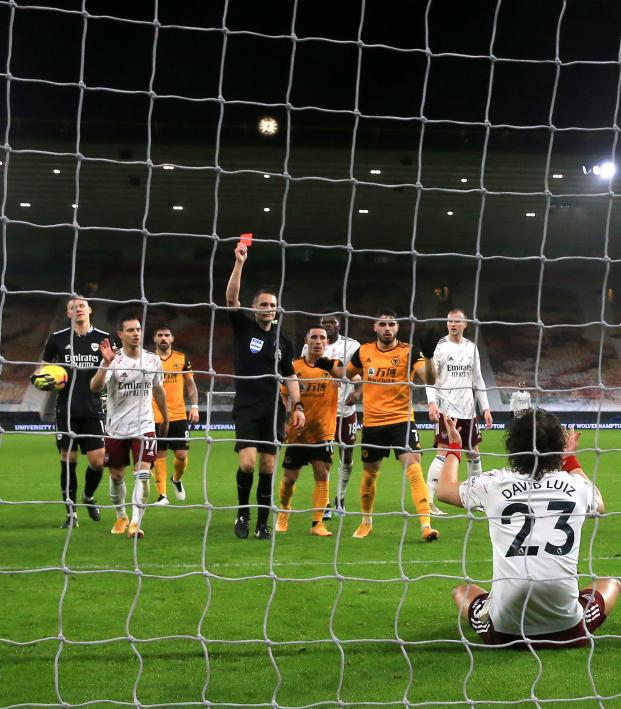 For Arsenal, Red Is More Than Just A Jersey Color

Travis Yoesting February 2, 2021
The Gunners finished with nine men and improved their incredible record of being punished.

There is nothing more frustrating in the sports world right now than being an Arsenal fan. Two more Arsenal red cards turned what looked like an impressive performance against Wolves into a 2-1 defeat on Tuesday.

At least if you’re a Knicks fan, you expect failure at this point.

David Luiz (again) and Bernd Leno were the culprits for Mikel Arteta’s side this time out as another positive showing was undone by red cards. Since Arteta took charge 13 months ago, Arsenal has been shown nine red cards, six more — 6! — than any other club during that span.

9 - Since Mikel Arteta's first game in charge of Arsenal on Boxing Day 2019, the Gunners have been shown nine Premier League red cards, six more than any other side. Freefall. pic.twitter.com/MHMtEUiDsX

Usually teams that receive a lot of red cards play a physical brand of football or perhaps have a few dirty players. Arsenal has never been accused of playing physically and there’s no one on the roster you could consider dirty.

Instead, it’s a mix of ineptitude and awful luck.

On Tuesday, Arsenal was dominating the first half. Bukayo Saka could’ve scored a hat trick within 10 minutes but for the post, a good save and VAR calling a goal back for offside. The Gunners found a way through via Nicolas Pépé, whose spectacular solo goal was the type of thing you expect to see from Lionel Messi.

Arsenal would lament not taking more advantage of its superiority late in the first half.

In first-half stoppage time, Willian José looked like he was in on goal until he fell to the turf in the box. David Luiz, who had been caught out of position, was racing back when his knee nicked José’s foot. Because Luiz wasn’t making a play on the ball, the double jeopardy rule could not take effect, so he was sent off and Wolves equalized with a penalty kick.

By the letter of the law, it was probably the right call. Under the spirit of the law, it’s incredibly harsh to punish a team with a goal and a man for incidental contact.

It didn’t take too long for Wolves to capitalize on the man advantage. Four minutes into the second half, Arsenal was slow to close down on João Moutinho, who ripped a vicious shot past Leno to give Wolves the lead.

It was always going to be hard for Arsenal to come back with 10 men, but the task became Herculean when Leno was shown red in the 72nd minute.

The German keeper was caught by an awkward bounce off the wet grass and used his arm to block the ball outside of his box with Adama Traoré chasing. Once again, the red card was brandished, and the Gunners were down to nine.

Again, there can’t really be any complaints about the call. Leno denied a goal-scoring opportunity with his arm.

But you can understand Arsenal fans’ frustration, especially after what happened on Saturday against Manchester United. Gooners feel their club is always harshly punished while teams like United and Liverpool are always given the benefit of the doubt.

But this isn’t a new thing for Arsenal.

Guess which one was a red.... pic.twitter.com/l8AQbFbuQD

Again, no one would accuse Arsenal of being a dirty team. Defensively inept? Sure. Unlucky? Definitely. Is there a conspiracy against the Gunners? As bad as British refs are, they’d never intentionally target a club. But when a team has a perception of committing red-card offenses, it makes it easier for a ref to show more red cards in a country where refs are notoriously scared to show red cards for fear of criticism.

It’s hard to imagine a more frustrating team to be a fan of than Arsenal right now. I say that as a Houston native who has watched the city’s professional teams all simultaneously decide they don’t want to have any good players anymore. (The possible exception to this is the Dash, who won the NWSL Challenge Cup last year without any USWNT players, which in turn forced Vlatko Andonovski to add Kristie Mewis and Jane Campbell to the team.)

Maybe I should just start rooting for the Knicks.