The New York Derby Just Became That Much Sweeter

One of the MLS's newest franchises is strengthening its squad with two world-class players, both of whom came to watch the most recent New York derby.
Photo: @caughtoffside | Twitter

As Major League Soccer grows, so too do the rivalries and competitive spirit within the league. The attractiveness of MLS has grown every day since its introduction to America in the early 90s with the help of world-class players retiring to the league.

In the most recent New York derby on June 28th, future NYCFC midfield players Frank Lampard and Andrea Pirlo went down pitch side to greet fans and help cheer on their new club. Lampard secured his move to NYCFC at the beginning of the 2014 season, but played on loan with Manchester City for one more season after departing Chelsea. Pirlo joining New York is still a rumor as nothing has been officially announced, but his appearance at the match says it all. 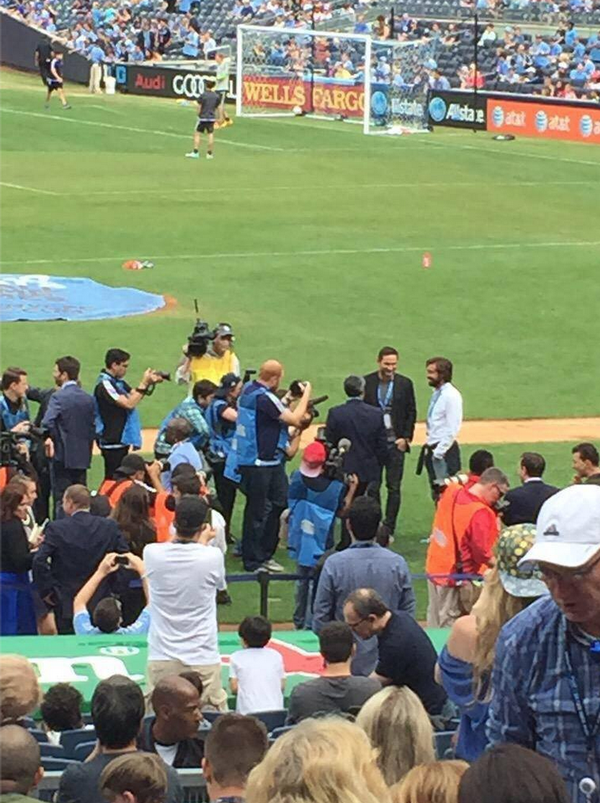 Lamps and Pirlo on the pitch during half time. Photo: @br_uk | Twitter

Even Gareth Bale was in attendance at Yankees stadium as a spectator (don’t get too excited NYCFC fans, he is still with Madrid) with a couple of mates. The American league is truly taking off and attracting the best players in the world. The next step is to produce more home grown players that can attract crowds comparable to European clubs.

Even Gareth Bale made an appearance in NYC. Photo: @SocialRMadrid | Twitter

The match itself began with an early goal from Manchester City’s American franchise to put them one goal up within six minutes. However, the Red Bull’s came back with a vengeance, putting three unanswered goals past NYCFC keeper Josh Saunders.

Lampard and Pirlo could be the answer to NYCFC’s woes as they sit only one spot above the bottom of the Eastern conference. Come July, it certainly looks like the newest New York club will have David Villa, Andrea Pirlo, and Frank Lampard amongst their squad with rumors of Dider Drogba joining in the future as well.

As for now, the two European legends are set to join NYCFC in time for their upcoming match against Toronto FC, who have Michael Bradley, Jozy Altidore, and Sebastian Giovinco in their ranks, a must watch for any soccer fan.