Kevin Davies And The Art Of The Foul

Liam Hanley December 3, 2020
How one Bolton striker's physical style of play changed the way teams viewed set pieces and redefined the role of a center forward.

When Kevin Davies took the field for Bolton Wanderers, the action on the pitch often resembled a barroom brawl rather than a soccer match.

Under manager Sam Allardyce, Davies consistently led the league in both fouls committed and fouls received, setting multiple records along the way.

The last English player to win a foul in as many consecutive PL apps was Kevin Davies between Oct 2005 and Aug 2007 (59)#WHUAVL pic.twitter.com/iUsRF2rPpX

Davies committed 605 fouls in his illustrious Premier League career. Only Gareth Barry has more career fouls (633) than the Bolton man, but the former England midfielder has also made 211 more EPL appearances than Davies.

The Bolton striker was also fouled more than any other player during his Premier League tenure:

727 - Kevin Davies is the most fouled player in the last 10 Premier League seasons, ahead of @Cristiano 500. Bruised. #AskOpta @dclark0

Bolton's opponents described their style of play as barbaric, underhanded and anti-football. But under Allardyce, Bolton achieved its best top-flight run in more than three quarters of a century, including four top-half finishes in a row and two Europa League appearances.

While Allardyce was at the center of Bolton's footballing revolution, Kevin Davies was unknowingly initiating his own tactical innovation. His aggressive stye of play changed the way teams viewed set pieces and redefined the center forward position as we know it.

Sam Allardyce's Bolton side lacked the talent and resources of other Premier League clubs. This meant he had to be ahead of the rest of the league in other facets, including statistical analysis, player recruitment and tactics.

"Big Sam" got the most out of his players by establishing a physical style of play based on long balls and field position. Allardyce's main philosophy was ball position is more important than ball possession; you need the ball to be near the opponent's goal to score, and your opponent can't score if they have the ball in their own half. 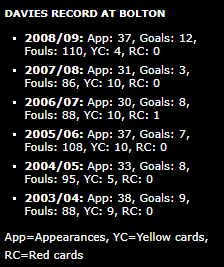 "He [Davies] essentially turned matches into a stop-start scrap based around dead-ball situations, which suited Bolton perfectly," writer Michael Cox said in his book The Mixer.

While Bolton lacked the technical ability to be successful from open play, the squad did have the size and aggressiveness to be effective from set pieces. By committing fouls frequently, Bolton was able to disrupt the opponent's attack and prevent them from possessing the ball in dangerous areas.

Bolton then embraced physical challenges in their attacking half, as this meant opportunities to play dangerous free kicks into the 18-yard area.

Davies was Bolton's leader in both fouls committed and received and a key part of the club's success in the Premier League. 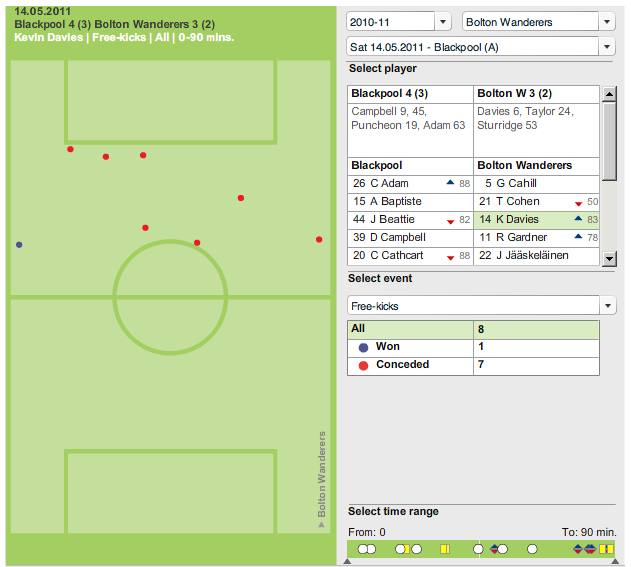 "The way I play there are going to be fouls," Davies said. "If you're challenging for long balls 20 or 30 times, it's inevitable. I'm not a dirty player and I never go out to hurt anyone. Physically I'm quite strong and I like to play in the right manner, but there are a lot of softies playing now who scream around."

Robin van Persie described Bolton's style of play as "not proper football," but from September 2004 to January 2007 Arsenal won just one of eight matches they played against Bolton.

Another Premier League giant that had trouble playing Bolton was Jose Mourinho's Chelsea.

In 2004-05, Premier League champions Chelsea allowed just 15 goals all season, and only twice did the Blues allow their opponent to score multiple goals. The first time was a 2-2 draw on the road to runners-up Arsenal. The other match: a 2-2 draw against Bolton at Stamford Bridge where Davies assisted one goal and scored another. Both Bolton goals, of course, came from free kicks in the second half.

Kevin Davies at the double for Bolton #OnThisDay pic.twitter.com/lugMmFhZuJ

Davies also committed a great deal of fouls due to his defensive work rate. While modern center forwards like Roberto Firmino are expected to work hard defensively in systems like Jurgen Klopp's gegenpressing, the 2000s were dominated by more stationary target men.

Strikers like Ruud vs Nistelrooy and Luca Toni would wait for chances in the 18-yard area. They scored many goals this way, but they had little involvement in build-up play or defending.

But Kevin Davies was different. His defensive effort and his ability to win aerial duels meant that his goal-scoring totals weren't as high as other strikers of his era, but his involvements away from goal made him extremely valuable to Bolton on both sides of the ball. 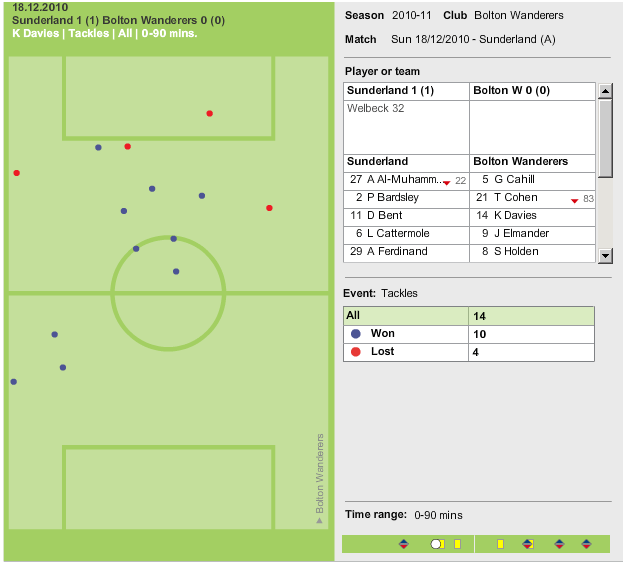 His contemporary Firmino finished the 2019-20 campaign with nine goals and eight assists while appearing in every match for the Reds. A generation ago, a Premier League club couldn't be a title contender without a Thierry Henry or Didier Drogba contributing upwards of 25 goals a season.

Yet Liverpool won the league in record time last season with a prolific attack and a striker that needed 37 league matches to finally score at home.

Both attackers used their defensive work rate off the ball to disrupt the opposition attack in hopes of winning the ball in favorable areas, a tactic that is now used by many top sides in the Premier League. It is rare to find a side where the attackers don't track back on defense or press in the opposing half.

While Davies may be considered one of football's last old-school "tough guys," his style of play inadvertently changed the attitude teams have toward committing fouls and earning free kicks. Other teams and players saw the success Davies had at drawing fouls and decided to implement his strategy. Diving has always been a part of soccer, but in the last 10-15 years it has become an epidemic.

Players hit the ground after minimal (or even no) contact and plead to the ref for a foul. Often, they are successful. Players have always been stretching the rules to gain an advantage, and diving to gain free kicks is simply an extension of the way Kevin Davies played for Bolton in the 2000s.

Davies was by no means a flopper. In fact, he denounced flopping, asserting: "Sometimes it feels like they (Arsenal) are trying to earn you a booking, which is a bit disappointing really and in some of the challenges, I felt that I won the ball. A few of them let out a big scream, which is a bit embarrassing because it is a man's game. Kolo Toure did one, and he is big, strong man, and he was screaming 'my leg' which is a bit unnecessary - but they get the free-kicks.

"In my eyes that is cheating the referee, they have conned him but you just have to get on with the game."

By challenging for the ball in offensive areas, that increased the chances of earning a Bolton free kick. Losing the ball or giving away a free kick were tolerable results because field position was still on Bolton's favor and it disrupted the match.

A foul committed 90 yards away from your own goal is perfectly fine because it means that pressure is applied in the opponent's defensive third. A foul this time could easily be a successful recovery of the ball and a chance at goal or an attacking free kick near the goal a few minutes later.

Ironically, what initially began as shrewd strategy by a strong player to gain free kicks in attacking areas has now devolved into play-acting at every instance of physical contact to try and court the affection of the referee.

But regardless of your opinion on diving and on borderline dirty play, Kevin Davies' impact on the game in undeniable. A striker that only once reached double digit goals in the Premier League changed soccer's attitude toward free kicks and revolutionized the role of the center forward.

Davies' career came and went without major fanfare, but he influenced the Premier League as much as Thierry Henry, David Beckham or any of the great players in England during the 2000s.

The game of soccer is always evolving and innovating. Like a starving artist turning to a new technique in an effort to sell more paintings, it is necessary for the under-resourced soccer teams to devise new strategies so they can compete with the giants of the modern game

The only question is, which overlooked player or manager will be the next figure to have a lasting effect on the Premier League?