Sami Khedira joins a long list of free transfer players to play for Juventus who have now reached a combined worth of nearly 150 million euros.
Photo: @FreshFootball | Twitter

Juventus have announced the signing of Real Madrid midfielder Sami Khedira on a free transfer after his contract and role at the Bernabeu have come to an end. He was overshadowed by the dominance of Kroos, his fellow national teammate, in the midfield, and even by Sergio Ramos sporadically throughout European competitions.

Khedira had been sought out by Arsenal and Chelsea before the Turin capital put pen to paper with the midfielder. In past seasons, Juve have capitalized on players at the end of their contracts to sign them on a (technically) free transfer. The club will still have to pay his weekly wages.

Sami Khedira in a Champions League match against his soon to be teammate Paul Pogba. Photo: @TransferRelated | Twitter

In previous seasons, the club has spent a total of 12.5 million euros (11 million pounds) in transfers on Sami Khedira, Andreas Pirlo, Paul Pogba, Arturo Vidal, and Claudio Marchisio combined. Paul Pogba alone has reached market prices of upwards of 70 million euros after joining Juventus from Manchester United. These players have since gone on to become a major part of the Italian’s recent success in the Champions League Final, after already winning the double in domestic competitions. 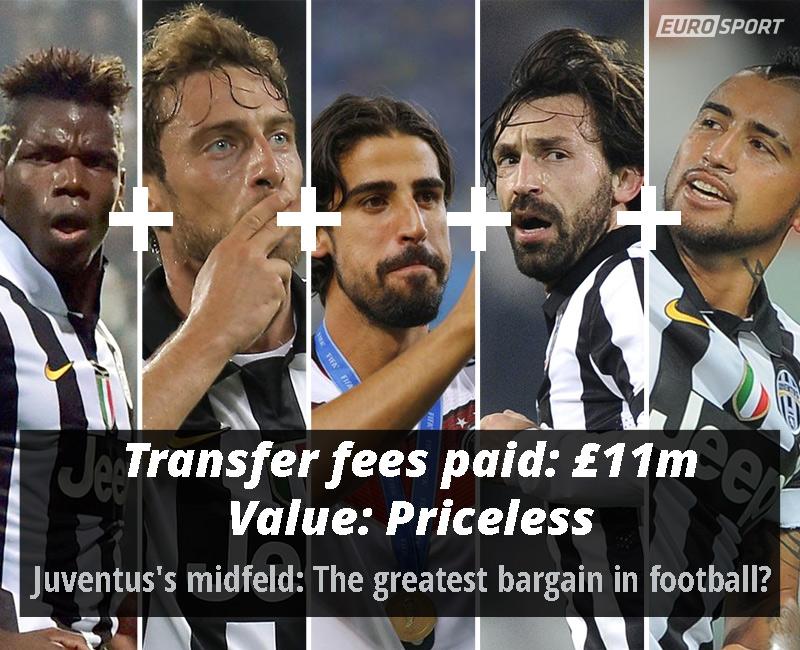 The caption says it all. Is this the greatest bargain for a midfield? Photo: @EuroSportCOM_EN | Twitter

Free transfers can be a rare gem during transfer windows when many clubs race to sign the biggest players who haven’t been offered an extension at their former club. Robert Lewandoski, Michael Ballack, and Sol Campbell are only some of the most beneficial free transfers to happen in the modern game.

Khedira is no washed up player either. His role in the World Cup this past Summer helped keep Germany a dominant, defensively disciplined side throughout all of the stages.

Odds are, Paul Pogba and Andreas Pirlo will be departing Turin, which will leave a big gap in central midfield for Khedira to fill. In the 4-3-1-2 formation that Allegri runs, Khedira will most likely fill the left hand side next to Marchisio in the middle, should Pogba be traded.