With less than a minute left in the season, Diego Simeone's Atlético Madrid was within touching distance of the league title.

Atlético Madrid had held on to first place in LaLiga for 29 of the previous 30 match weeks and was leading Valladolid 2-1 in a must-win match. Anything less than three points and Atlético's hated crosstown rival Real Madrid would take the title.

Thanks to the Atlético press, the ball was deep in the Valladolid half. But after a few neat passes, it appeared that space had opened up for the hosts. As the Valladolid winger ran onto the ball played in front of him, in came Atlético fullback Kieran Trippier, who belted the ball out of bounds, ending the threat.

The clearance was nothing special — it was a ball Trippier was favored to win all the way — but it was the reaction from Simeone that summed up the essence of Atlético Madrid football:

The situation was magnified because of its context in the season as a whole, but plays like that are a staple of Diego Simeone's style of football.

Back in April, midfielder Marcos Llorente recorded the fastest sprint speed of the LaLiga campaign, when he was clocked at approximately 22 mph while sprinting back to defend a 91st-minute counterattack.

Then there is the popular clip from the 19-20 season, which shows eight Atlético players again sprinting back to defend a counterattack in a Champions League group-stage game against Lokomotiv Moscow, turning what could have been a two-on-two into a two-vs-eight. In the end, Lokomotiv shot the ball harmlessly over the crossbar in a match that Atlético would go on to win 2-0.

While much of Atlético Madrid's success can be traced back to tactical ingenuity of Diego Simeone and the club's smart transfer dealings, it is the mindset Simeone has instilled in the club that has truly made it into one of the elites in Europe.

This overall team philosophy is known as "Cholismo," derived from "Cholo," Simeone's nickname from his playing days, and is centered around the idea that "effort is non-negotiable."

Cholismo is a fighting spirit and workrate that is difficult to calculate with numbers and cannot be defined by many statistical categories, but it shows up in the final scoreline. It is the basis of Atlético's strict defensive principles and aggressive style of play and is fueled by the overwhelming desire for victory.

Atletico Madrid's cholismo has made them into a European force pic.twitter.com/Sr2jOA90xZ

In Simeone's brand of "macho football," no player is bigger than the team, and despite often having lesser players than their elite-level opponents, Atlético's well-organized sides use teamwork and grit to outplay their competition.

Simeone places heavy emphasis on the match at hand instead of the bigger picture, a philosophy he calls: "Partido a partido" — literally "match to match."

This mindset has been especially effective in international cup competitions. During the Argentine's managerial tenure at Atlético, he has won two Europa League titles and has twice reached the final of the UEFA Champions League — unfortunately losing to rival Real Madrid on both occasions.

@FALCAO was unplayable for @Atleti in the 2012 final #ThrowbackThursday | #UEL pic.twitter.com/Vaz3I7paSf

Prior to Simeone's arrival, Atlético had qualified for European football just twice in the previous 10 seasons, even spending two seasons outside the top flight for the first time since the 1930s. In his 10 full seasons in charge, Simeone has only one finish outside the top three in LaLiga (fifth place in 11-12).

This stretch included a pair of league titles: 2013-14, and, most recently, this past season.

The 2020-21 title is especially impressive considering that based on expected goals, Atlético Madrid should have finished in fifth place in LaLiga this season — with 19 fewer points, 10 more goals allowed and nine fewer goals scored.

The team was also ninth in the league in possession, fourth in shots and fourth in key passes — not exactly the level of offensive play you would expect from a title-winning side. The club also consistently averages less than 50 percent possession over the course of a season.

The squad excelled defensively though, allowing the fewest goals in the league (for the fifth time in six seasons) and finishing second in tackles made — both Simeone staples.

But it is not just Simeone who has shaped Atlético into the workhorse that it now is; much of the credit for the Rojiblancos' rise to prominence must given given to the club's strength and conditioning coach, Óscar “El Profe” Ortega.

Known as "The Professor," the 62-year-old Uruguayan began his career as a rugby coach in his home country but has since switched his attention to football. Ortega coached Simeone during his first stint as Atlético's strength and conditioning coach in the early 2000s, and his methods impressed Simeone so much that the Atlético boss hired Ortega for his previous managerial jobs in Argentina and Italy.

Under-resourced in comparison to Spanish behemoths Barcelona and Real Madrid, Simeone knows that the only way for Atlético to beat these clubs is to out-work them. That's where El Profe comes in.

In order to maintain such a high work rate over the course of both a 90-minute game and a nine-month season, Atlético players need to have elite fitness levels.

Ortega is notorious for his preseason workouts at the club's training camp in Segovia, often referred to as a "living hell," where players spend most of their days running the hills of the local golf course under the brutal Spanish summer sun, with Ortega often joining in as a pace-setter. These grueling days help the coaching staff determine which players are first-team material, and Ortega is in complete control.

The Urugauyan's training sessions are not solely based around running though. Ortega devises in-depth and highly organized circuits to target very specific skills and hone different muscle groups. He draws from his extensive sporting background to create new drills inspired by a plethora of sports, often devising specific workout plans for each player.

"We create the exercises," Ortega says, "but the ball doesn’t come to you itself. You have to go and get it"

Ortega's extensive experience coaching rugby is also helpful for reinforcing Simeone's brand of football, as the Uruguayan is familiar with drills that are focused on physicality and defending as a unit.

But Ortega is also well-versed in the realm of footballing tactics as well, and he often devises training sessions based on the style of play of Atlético's upcoming opponent — a sign of his versatility and the trust Simeone has in his fitness coach. This allows him to combine both fitness and tactical training into the same practice.

According to Ortega, these strict training sessions are an extension of the disciplined football Atlético must play on the pitch, and they work toward establishing the team philosophy.

"Direction, coaches, the technical staff and the players are all aligned,” Ortega says. “We’ve all worked to give an identity, a belonging that is very important. For those who arrive it’s easy, though they must adapt. But they know where they’re headed. Naturally, it wasn’t like this at the beginning, but today we have everything so that the new arrivals become a part of a defined idea."

In-game, Simeone often looks to Ortega for substitution advice, because who knows if a player is tired better than his fitness coach?

Yet equally important to the arduous work on the pitch is the team-building off the field. At the end of the training camp in Segovia, the players are treated to a big feast at the Restaurante José María in town, a pig roast that acts almost as an initiation ceremony for the players that survived the conditioning marathon. 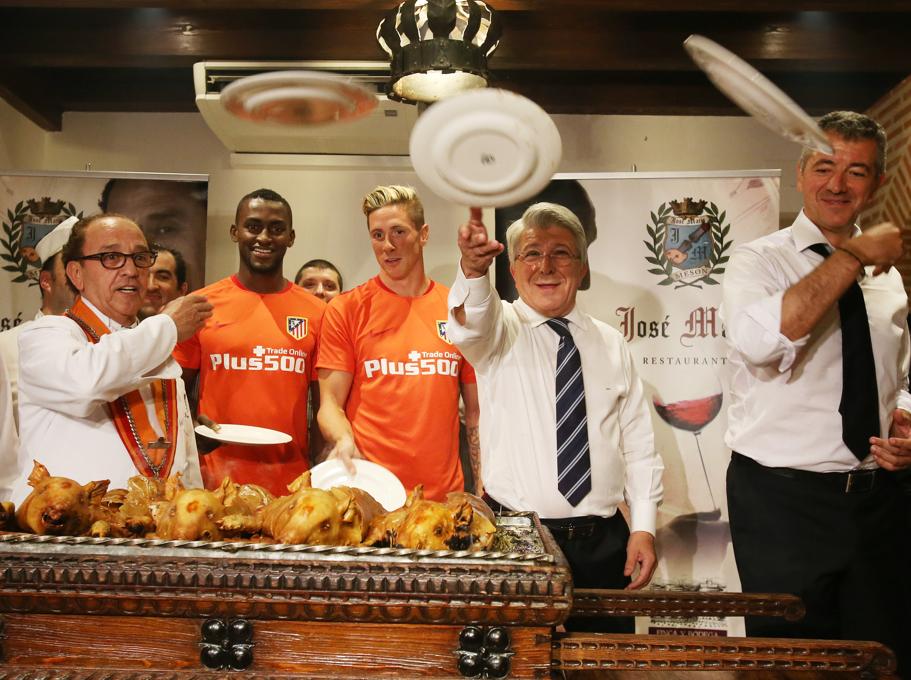 It may be cliché, but it's true; Atlético Madrid is more than a team, it's a family. In order for Simeone's style of football to succeed, players not only have to believe they can win, they need to trust in the ability and desire of every other player on the team.

These principles hold true for any team, but are especially imperative for a side that depends less on talent and more on organization and work rate.

"We don’t have the options of the super-powerful," Simeone says. "So, we have to try and be creative, keeping in mind what we need to make the team better and which pieces of the team we are developing."

Cholismo, a product of both Diego Simeone's style of play as a hard-tackling midfielder and Atlético's underdog status in LaLiga, embodies this outlook.

It was devised as a way to subdue the Galacticos of Real Madrid and thwart the tiki-taka football of Barcelona. It is a style that Blair Newman of These Football Times describes as "unapologetically nonconformist," a phrase that would also be a great way to describe Simeone himself.

Simeone emphasized the underdog and outsider mentality at Atlético and made it into one of the club's main traits, creating, to quote Newman again, an "underlying ethos."

It is formed by Ortega during the punishing preseason runs in Segovia and by Simeone when he cheers for a 93rd-minute clearance as if it were a game-winning goal.

It can occasionally be detected in stats like tackles won and meters run, but it won't show up in expected goals or other performance-based metrics. Ultimately the only place the Atlético Madrid mentality can truly be measured is in the final scoreline.

Form may be fickle, and talent comes and goes, but effort is non-negotiable.