An American Education In The World's Game: European Stars Who Played College Soccer

This notable names took an unusual path but still made it big in Europe.
Getty Images

In Europe there's a pretty established pathway to becoming a professional footballer: get signed to the academy of a professional club at an early age and hope that one day you're good enough to make the first team.

For an American with European dreams, the route is similar: either have a rich family that can send you abroad or hope that a European club somehow spots you.

American players that don't cross the pond have two options. Either join an MLS academy and work your way up to the first team or play college soccer and hope to be selected during the MLS SuperDraft. Again, a lot of hope is involved.

Very rarely there is another way that combines both of these processes — a European that comes to the United States, plays college soccer, and then embarks on a career back in Europe.

For Americans and Europeans alike, attending college in the U.S. is one of the least feasible paths towards playing professional soccer in Europe. By that age, players in Europe have already signed professional contracts and are playing soccer full-time, not dealing with school work and the other stresses of higher education.

While infrequent, there are a few European players who have managed to pull it off:

European Stars Who Played College Soccer in the United States

Born in Yugoslavia, Ibišević grew up at a time of great unrest in his country, as the Bosnian War took more than 100,000 lives and displaced around 2.2 million others (here's a great story on his life from ESPN a few years ago). Fortunately, his family was able to flee, and they spent 10 months in Switzerland before eventually moving to the United States and settling down in St Louis.

Ibišević quickly became one of the top soccer recruits in the country, and he stayed local by attending Saint Louis University. During his freshman year at SLU, Ibišević scored 18 goals in 22 games as he led the Billikens to the quarterfinals of the NCAA Tournament.

The striker also earned NCAA Freshman of the Year honors and was named a First Team All-American. He drew the attention of fellow Bosnian Vahid Halilhodžić, who happened to be manager of Paris Saint-Germain at the time.

Ibišević signed with the reigning Coupe de France champions but only played four matches across two seasons in Paris. His big breakthrough came in 2008/09 when Ibišević scored 18 goals in 17 Bundesliga games with Hoffenheim before a knee injury ended his bid at the Bundesliga Golden Boot.

The Bosnian never quite reached the same heights again, but he carved out a successful career with Stuttgart and Hertha Berlin while also making 83 appearances for Bosnia and Herzegovina. 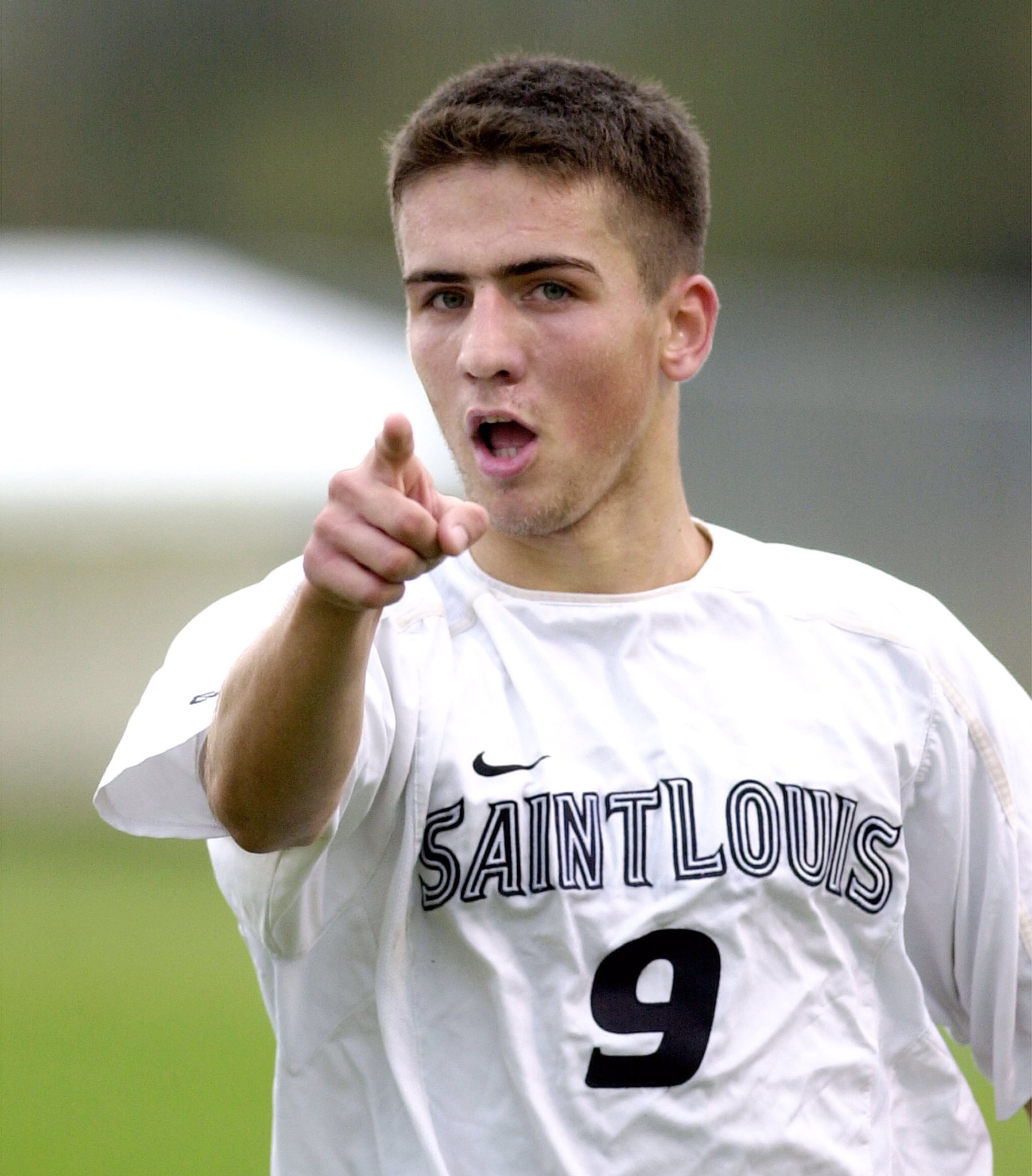 Ibišević knew he was big stuff at SLU. Via FirstPoint USA on Twitter.

After seven years at the Manchester United academy, Harrison's mother made the surprise decision to send him elsewhere — Berkshire School in Sheffield, Massachusetts, to be exact.

"There were 8s and 9s and 10s in the training area, 20-odd boys in each group," Harrison's mother told The New York Times, "and I’m thinking, 'They’re only looking for one in this group, one to come through, and they’ll be happy,'. It’s a factory system, isn’t it? They go into these academies, and they kind of become a number."

In her mind, sending her 14-year-old son stateside was the best way to beat the odds. Three years later, Harrison was named Gatorade National Player of the Year for high school soccer.

He spent one year at Wake Forest, earning all-conference honors before being selected number one overall in the 2016 MLS SuperDraft by the Chicago Fire. Chicago traded Harrison to New York City FC (who had previously tried to claim Harrison as a Homegrown Talent despite the fact that Harrison's club, Manhattan SC, didn't become an NYCFC affiliate until after he already left) and he blossomed.

After two impressive seasons in MLS, Harrison was signed by NYCFC parent club Manchester City. Man City loaned him out to Leeds United for the next three seasons before eventually earning a permanent move to the Yorkshire side this past summer. Looks like his mom's gamble paid off.

Hislop was born in London before growing up in his parents' home country of Trinidad and Tobago. From there he took the unlikely route of attending Howard University — an HBCU in Washington D.C. The goalkeeper led the Bison to the NCAA title game in 1988 (they lost to Indiana in the final) and the NCAA quarterfinals the following year.

Hislop earned a degree in mechanical engineering and even interned at NASA the summer before his senior year. After graduation, he was drafted by the Baltimore Blast — a newly founded professional indoor soccer team. While the Blast was touring Europe they played against Aston Villa, and it was these indoor matches that earned Hislop a tryout with third-tier Reading FC.

Shortly after, the Trinidadian earned a contract and then the starting spot at Reading — marking the start of a career in England that spanned 13 years. Hislop earned a move to Premier League side Newcastle in 1995 and he would also start for West Ham and Portsmouth across his 222 EPL appearances.

He earned a pair of second-place finishes with Newcastle and won the 1999 UEFA Intertoto Cup with West Ham, but the "proudest moment" of Hislop's career came when he started his country's World Cup debut in 2006, presiding over a 0-0 draw against Sweden.

For everyone else on this list, coming to college in the United States was a springboard for a career in European soccer. Englishman Dom Dwyer decided he loved the U.S. so that he would spend his entire soccer career here.

Dwyer moved to the U.S. in 2009 to play for Tyler Junior College in Texas, staying there for two years and winning a pair of national championships. He then transferred to the University of South Florida, where he scored 16 goals in 21 games en route to a first-round selection in the 2012 MLS SuperDraft.

The Englishman now has 222 MLS appearances to his name with Kansas City, Orlando, and Toronto, as well as an MLS Cup title. Not bad for a player who broke his foot three times as a teen and was told he was not physically able to play professional football. 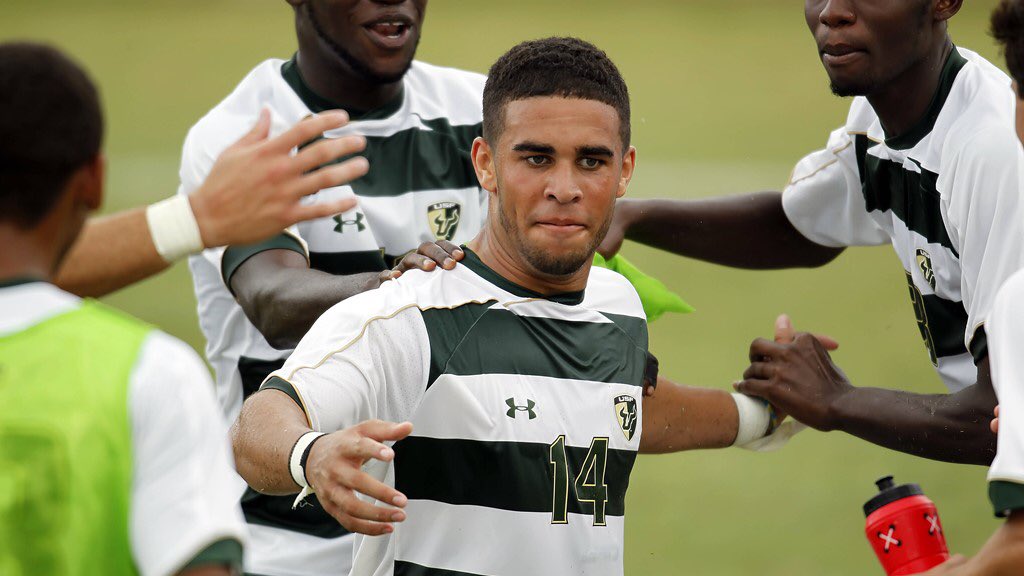 Dom Dwyer during his time at the University of South Florida. Via SSUSA on Twitter.

Much like Ibišević, Subotić was a Bosnian born in Yugoslavia who was forced to flee his native land during turbulent times. His family fled to Germany in 1994 to escape the violence in his homeland before eventually moving to the United States in 1999.

He first lived in Salt Lake City, but it was in Bradenton, Florida, that Subotić — the base for the U-17 USMNT — drew the attention of USMNT coach John Fulk. Fulk was an assistant on the team, and he convinced head coach John Ellinger to give this club-less kid a tryout.

Subotić earned a spot on the U-17 team and soon after committed to playing at the University of South Florida. Yet he never played a minute for the Bulls. While touring the Netherlands with the U-17 side, Subotić caught the eye of another coach, who arranged a tryout with German club Mainz 05.

Less than two years later, Subotić made his Bundesliga debut for Jürgen Klopp against Bayern Munich, and any thought of collegiate soccer had long since passed. Soon after, Subotić joined Klopp at Borussia Dortmund and made his debut for the Serbian National Team — breaking the hearts of American soccer fans everywhere. 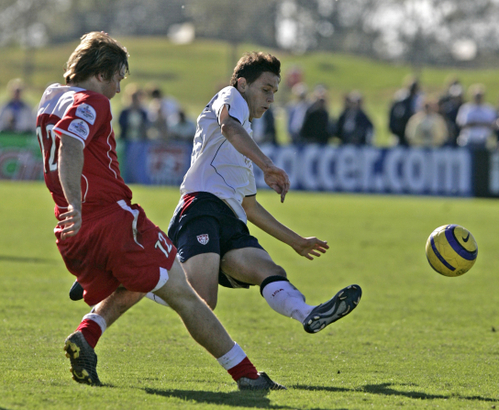 A rare photo of Neven Subotić playing for the U-17 United States Men's National Team. Via SBI Soccer.

Can you believe that Nat Phillips almost played for the 49ers? No, not the NFL team, the 49ers of Charlotte University in North Carolina. The year is 2016 and after seven years at the Bolton Wanderers academy, Phillips failed to secure a contract at the cash-strapped club.

After no offers at the Championship or Premier League level, Phillips began to look elsewhere. His search led him to Charlotte — a top collegiate program with a track record of sending players to MLS.

"With the university, I was going to, they were drafting, in general, at least one lad a year," Phillips recalled. "They were a good standard of football team as well. I was happy with that side of things. It was more a case of it being a safer option for me because I would have had a degree at the end of it."

Phillips earned a scholarship and was even announced as part of the 49ers 2016 recruiting class. The Englishman was training at Huddersfield Town to maintain his fitness before his first collegiate season when he received a surprise phone call.

"Three days into that I got a phone call off Liverpool saying: 'We're going to Germany for preseason, and we'd like you to come and train with us. Can you do it?'" Phillips recalled in 2017. "Obviously, I leaped at the opportunity and from then on it was all a bit surreal. I knew it was one last opportunity to stay in the U.K. and try to make myself a career with Liverpool."

The day Phillips was supposed to leave for the states, he ended up signing a two-year deal with the Liverpool U-23s. Now he has a Champions League medal.