The18's Mike Smith predicts which Premier League clubs will survive and which ones will be relegated at the end of the season.
Photo: lcfc.com

With three (or four, depending on the club) matches left in the Premier League season, Chelsea has already captured the title and the Champions League places look relatively secure. Which means that the only battle left to focus on this season is relegation, where we must say goodbye to three of our friends, who will be spending next season in the Championship. With Burnley (26 points) and QPR (27 points) almost certain to drop down, let’s look at the five remaining clubs stuck in the heart of the relegation battle and analyze which ones will remain in the Premier League.

Aston Villa had an incredibly rough stretch last fall in which the club had to suspend its “Goal of the Month” competition because the club failed to score a single goal in the month of October. As Pete Campbell would say, “Not great, Bob.” The club’s struggles cost manager Paul Lambert his job and his replacement, former Tottenham manager Tim Sherwood has lit a fire under the Villans (probably not the right way to refer to them, but it sounds cool) and the club has responded by defeating Tottenham in the league and Liverpool in the FA Cup semifinal as part of its climb outside of the relegation zone. More recently, Villa narrowly lost to Manchester City at the Etihad and then defeated Everton 3-2. They are peaking at the right part of the season, just in time to avoid relegation.

Aston Villa also has a favorable schedule to close the season, with home matches against cellar-dwellers Burnley and a disinterestedly-mid-table-bound West Ham United.  Though Villa may have one eye on its FA Cup Final showdown against Arsenal, staying in the Premier League will remain the primary goal. With 35 points already in-hand, Villa would not need much to stay up and with two home fixtures, we think they’ll get it.

Oh. This hurts. We at the18 previously looked at what was going on with Newcastle owner Mike Ashley and it was not good. Things have only gotten worse since that was published, as the Toon has lost 8 matches in a row (or “on the trot” as they’d say in England), sending them from the security of mid-table down into the relegation battle.

With 35 points, it would not take much for Newcastle to avoid relegation, but when you have lost 8 matches in a row, getting a single point seems a bridge too far. Many members of the Toon Army think that the players have given up because of the uncertainties in the ownership, which led to supporters chanting “get out of our club, you fat bastard, get out of our club” at Ashley. Not the most creative chant, but you have to admire the spirit. And if there is one thing Newcastle fans are known for, it’s their fitness, which makes the chant all the more on-the-nose. After last weekend’s listless 3-0 defeat to Leicester, manager John Carver lashed out at his players for their lack of effort and suggested that Mike Williamson got himself sent off on purpose to “take the easy way out.” So things are going well on the Tyneside.

Nothing the Toon has done over the last few weeks supports it, but I just have a feeling that Newcastle is going to stay up. Two home matches remain against opponents with nothing to play for and the home supporters are going to will the lads to get the points they need (it may just take one). Even if they will them by shaming their lack of effort.

The Foxes have been red-hot as of late, winning five of their last six matches, with the sole loss coming to Chelsea. Their current form has led Leicester out of the bottom three, but they are still only one point ahead of Sunderland, who has a game-in-hand. Leicester has a mixed fixture list, as it must face a Southampton squad that is desperately trying to qualify for the Europa League (be careful what you wish for Saints), before finishing with two of the clubs it is battling at the bottom of the table in Sunderland and QPR.

In mid-to-late March, it seemed certain that the Foxes would be returning to the Championship after just one year in the Premier League, but quirky manager Nigel Pearson is pushing all the right buttons with his squad. His post-match press conferences have been divine, including last week’s after the Chelsea match when he asked a reporter that claimed to not know about the criticism his squad has taken in recent weeks by telling the reporter, “If you don’t know the answer to that question then I think you are an ostrich. Your head must be in the sand. Is your head in the sand? Are you flexible enough to get your head in the sand? My suspicion would be no.” When the reporter admitted he probably was not flexible enough to do that, Pearson immediately responded, “I can, you can’t.” Amazing.

Then again, being called an “ostrich” is an improvement over what Pearson has called other members of the press this season...

Oh and there was the time he grabbed a Crystal Palace player by the throat...

Pearson seems to be just the type of leader that is “stupid like a fox” and that will be enough to save Arlo White’s hometown club. I couldn’t be happier about this. We all need a bit more Nigel in our lives; he’s a national treasure. Come on you Foxes.

For Steve Bruce’s boys, it is all going to come down to this weekend’s fixture against Burnley, which they absolutely must win given the two remaining opponents they have. A win would get them to 37 points, which would probably be enough. Anything less and they’re going to have to steal points against one of the big boys. Hull had a big 1-0 win over Liverpool on April 28th, which currently has them one point away from safety.

Steve Bruce is a big lad, as indicated by this picture from his recent vacation. He’s big, he’s sunburned, he’s not wearing a shirt, and he just doesn’t care. Hull will beat Burnley this weekend and hopefully Bruce will whip off his shirt and run around the park.

The Black Cats have a game-in-hand over the other clubs, but unfortunately for them, it’s away at Arsenal, who have been playing the best football in the Premier League over the last few months. It is a very difficult schedule down the stretch for Sunderland to improbably escape relegation with for a second consecutive year. Though Everton and Chelsea may not have anything to play for, Sunderland won at Chelsea last year and Chelsea will be receiving the Premier League trophy at the conclusion of the match, so Jose Mourinho will have his lads ready to go. Better pick up the points before the last match of the season.

Unfortunately for Sunderland fans, they are not going to get it done. The schedule down the stretch is too much and they will be the one left out once the music stops. Sunderland will be relegated to the Championship, which will provide Newcastle fans with a little bit of joy to counteract their recent misery. 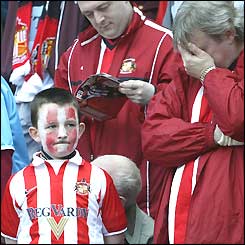 It’s ok Sunderland fans, Championship football can be fun. They have playoffs!