Manchester United Are Better Than Fergie’s Title Winners Under Mourinho

You’ve likely heard that Jose Mourinho’s Manchester United are, after 13 Premier League matches, further down the EPL table than they were during the dog days of David Moyes and Louis van Gaal. You’ve also probably been told that Mourinho has won as many games (six) in his last 20 EPL fixtures as Sean Dyche, Sam Allardyce and, yes, David Moyes. And all this after spunking a bajillion of the late Malcolm Glazer’s hard earned dollars all over the summer transfer market.

So, in summary, Jose Mourinho is a s*** manager and his Manchester United are the sporting equivalent of gastroenteritis.

But while points mean prizes, using the league table alone as a barometer for United’s performances is folly. For example: in stark contrast to the Moyes and Van Gaal eras, your correspondent hasn’t once slipped into a first half coma while watching Mourinho’s Red Devils.

And a closer look at the stats supports that anecdotal evidence: the United of today are playing much better football than they were in any of the last three seasons. Indeed, one could argue that Mourinho has United playing better football than they managed in 2012-13, when they won their last title under the guidance of Sir Alex Ferguson through the goals of Robin van Persie.

Here’s why, statistically, Mourinho’s United are an upgrade on his predecessors.

More Shots, From Closer Range, And With Greater Accuracy 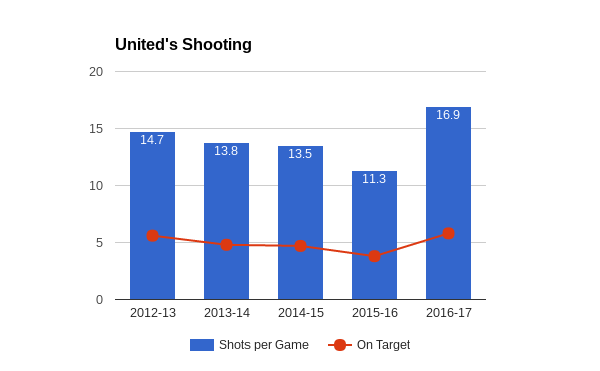 Mourinho’s United have recorded 50% more shots per game than Van Gaal managed last season and 20% more than David Moyes’s solitary year in charge. Perhaps most surprisingly, his players are also letting fly twice more per game than the 2012-13 title winners did under Fergie.

Take away three heroic goalkeeping performances from Jack Butland, Tom Heaton and Darren Randolph, and United would be six points further up the table. 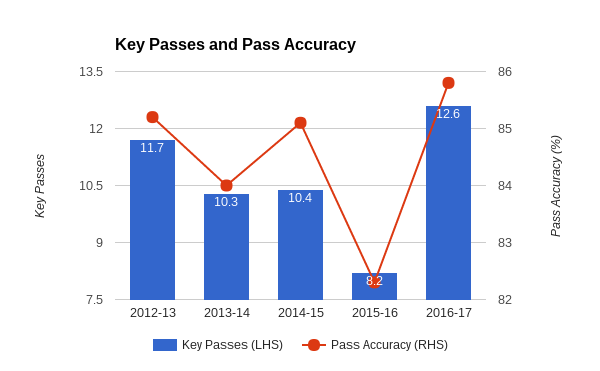 We all remember Louis van Gaal’s insistence on passing for passing’s sake; that possession is nine tenths of the law. Yet while carrying four pounds of crack cocaine down Broadway will almost certainly get you arrested, hogging the ball for 60% of the game does not necessary equate to goals. Possession was high, but incisive, chance-creating passes were almost non-existent under the Dutchman.