Chronicling The Strangest Strategies Goalkeepers Employ To Save Penalties

Soccer is unique in so many ways, and perhaps no play in all of sports is more meaningful than the penalty kick.

Points are more scarce in soccer than they are in any other sport, and no other sport includes one play with such a high percentage chance of scoring.

A game that features 22 players on the pitch is condensed into a one-on-one battle for a few crucial seconds, and in the end, there are only two possible outcomes: either a goal is scored or the ball fails to cross the goal line — with the former being the most likely.

Recent studies have found that professional soccer players convert penalty kicks about 75 percent of the time. With such a disadvantage facing the player between the posts, goalkeepers will do just about anything to swing the odds a couple of percentage points in their favor.

This includes plenty of mental intimidation tactics as well as some questionable physical procedures. Some work and some don't, but because there is such little expectation on the keeper to make the save, there is more incentive for keepers to turn to increasingly bizarre strategies in order to keep the ball out of their net.

Here are some of the most successful, and, ultimately, the weirdest schemes goalkeepers have employed to save penalty kicks over the years.

I first came across this penalty strategy around the year 2009, and it turns out that it is just as effective against international-level penalty takers as it was against 12-year-old me.

By favoring one side of the goal, the keeper presents an interesting conundrum for the penalty-taker: aim toward the open side, trusting your shot above the goalkeeper's diving abilities, or go to the same side that the goalkeeper is standing in an attempt to out-fox them.

The most recent victim of this mind trick was PSG superstar Neymar, who completely missed the target in PSG's final league game of the season against Stade Brest with Gautier Larsonneur in goal.

Brest goalkeeper Larsonneur stood on the right side of his goal to try and trick Neymar.

Neymar just MISSED THIS PENALTY that could've given PSG a 1-0 lead over Brest and can this be a decisive moment in the Ligue 1 title race?# LIVE NOW ⬇️
beIN SPORTS
CONNECT 8 https://t.co/LRYa03w6yI pic.twitter.com/Uv4dsTa9x8

Brentford keeper David Raya pulled off a similar ploy in last year's EFL Championship playoffs against Swansea. Raya's positioning wasn't as extreme as that of Brest keeper Gautier Larsonneur (the Spaniard was probably about one step closer to the center than his French counterpart), but it was equally as effective, as Raya was able to dive to his left to save André Ayew's effort.

One of the most intriguing moments at the 2014 World Cup came late in the Netherlands' quarterfinal match against Costa Rica, when Dutch manager Louis van Gaal brought in backup goalkeeper Tim Krul to replace starter Jasper Cillessen at the very end of extra time. Substitute penalty takers are common, but never before had a different goalkeeper been brought on for a penalty shootout in the World Cup.

"We felt Tim would be the most appropriate keeper to save penalties," van Gaal said. "Every keeper has specific qualities. Tim has a longer reach and a better track record with penalties than Cillessen."

Cillessen had not saved any of the 15 penalties he had faced prior to the World Cup, and he had conceded two spot kicks in the Premier League, yet Krul had saved just two of the 20 penalties he faced while at Newcastle.

Still, Krul had apparently performed well saving penalties in training for the Dutch, and he was brought onto the field just before the final whistle, a change Cillissen had not been informed of beforehand. The risk worked though. Krul saved two Costa Rican spot kicks to send the Dutch through to the semifinals.

After the match though, it was what Krul did before each penalty that drew the attention of fans and journalists. Krul paced about the edge of the six-yard area and appeared to be talking to the Costa Rican penalty takers.

"I psyched them (Costa Rica) out,” Krul said after the game. “You try to do everything you can without being too aggressive. I tried to get in their minds. I watched them against Greece and studied them and I told the players (from Costa Rica) that I knew where they were going to shoot to make them a bit nervous. Maybe it worked.

"It happened before when I played against Frank Lampard: I told him that I knew and I saved it. I just tried that again. I’m so happy it worked today."

His film study proved incredibly useful, as the Newcastle keeper guessed correctly for all five spot kicks. His pre-kick pacing also alluded to the direction of his dive; each time he paced toward one side of the six-yard area, then dove the opposite direction for the ensuing penalty. 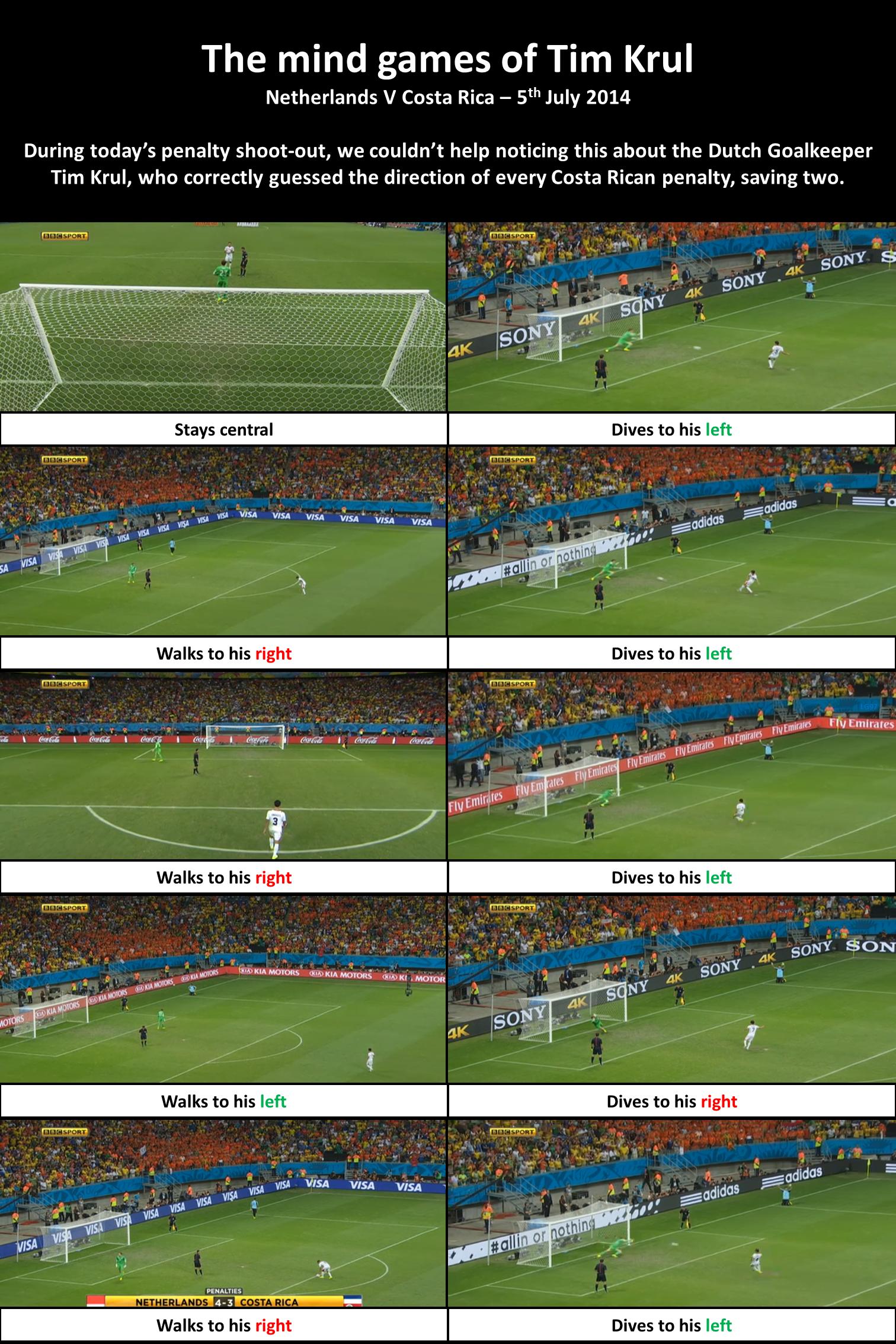 Krul was unable to repeat his heroics in the semifinals though. Van Gaal used his third and final substitution to bring striker Klaas-Jan Huntelaar on for Robin van Persie in the first period of extra time and the Netherlands lost on penalties.

Another strategy employed by Dutch keeper Tim Krul, he was not the first to use some crib notes to save penalties. Back at the quarterfinals of the 2006 World Cup, German keeper Jens Lehmann saved two of the four Argentine penalties (and guessed correctly on the other two) he faced thanks to notes hidden in his sock. 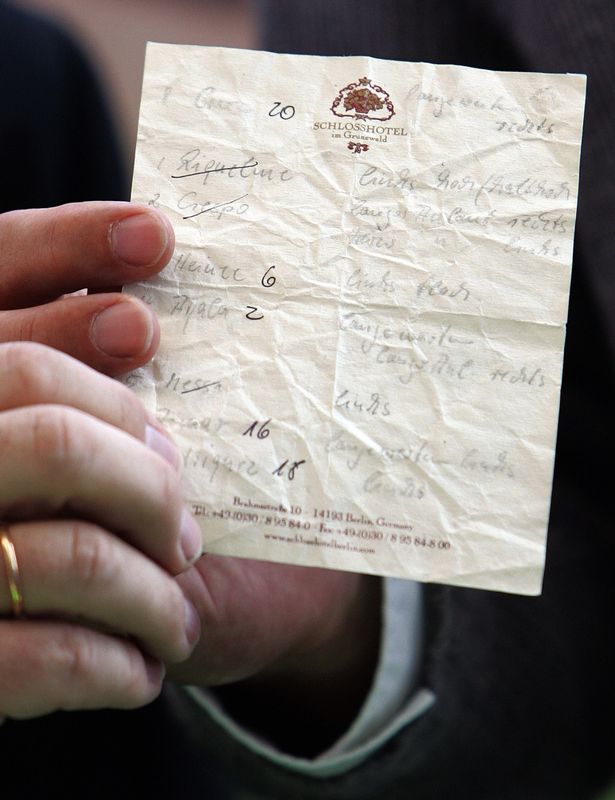 Thanks to the help of the German coaching staff, Lehmann compiled a list of the tendencies of the Argentine penalty takers on a piece of paper from the team hotel, which he consulted prior to every shot in the shootout.

The ironic part was that Lehmann didn't even have notes on Esteban Cambiasso, Argentina's decisive penalty taker, yet the keeper still looked at his crib sheet to psych out the midfielder. It worked, as Lehmann saved Cambiasso's effort and sent Germany through to the semifinals. Lehmann's crib notes would go on to sell for one million euros.

This approach was repeated by Tim Krul, now with Norwich City, during the Canaries' FA Cup fifth-round tie against Tottenham in 2020.

The Dutchman had a water bottle with the penalty preferences of the Spurs players written on tape wrapped around the bottle, which he consulted before each kick.

Krul also repeated some of his 2014 antics — taking his dear old time before setting up on his goal line and pacing about the penalty area while sending words of encouragement to the Spurs players. With 18-year-old striker Troy Parrott, Krul approached him at the top of the penalty area while also talking to the youngster before ultimately saving the Irishman's penalty.

Spurs missed one penalty, Krul saved two others and the Canaries were through to the quarterfinals.

This is a favorite of World Cup-winning goalkeeper Fabian Barthez of France, who would often stand outside the sticks until the referee forced him to line up in goal. This ploy gave the kicker extra time to think about his impending shot — similar to icing the kicker in the NFL.

Tim Krul is also a purveyor of this ploy, no doubt drawing inspiration from the famous French keeper.

The 2008 UEFA Champions League final is well-remembered not only because it was the first all-English final in the modern history of the UCL, but also because of the drama that occurred in the penalty kick shootout.

Prior to the match, Chelsea received advice from world-renowned economics professor Ignacio Palacios-Huerta, who told the Blues a couple of key strategies to employ should the match go to penalties:

United won the toss and elected to go first, giving the Red Devils the advantage, but the rest of Palacios-Huerta's advice worked perfectly for Chelsea. Ronaldo stuttered, Chelsea keeper Petr Čech didn't bite and the Portuguese attacker hit a weak penalty to Čech's right, which was easily saved.

Four of Chelsea's five penalty takers went to their unnatural side, with the exception of lefty Ashley Cole, who nearly had his shot saved. Van der Sar dove to the kick-taker's natural side four out of five times, with Frank Lampard being the exception.

If not for John Terry's famous slip on the fifth and deciding penalty, the Blues would have been champions of Europe. The same trend continued for the sixth penalty, but by the time Chelsea's Nicolas Anelka stepped up to take the seventh, van der Sar sensed something was up.

Chelsea had gone to van der Sar's left all six times, with Ashley Cole being the only player not to follow Palacios-Huerta's advice. Van der Sar figured Anelka would also shoot to the left, but just not for the same reason.

Standing on the goal line with the ball 12 yards away van der Sar decided to play some mind games, and he pointed to his left, as if to say to Anelka: "You're going to shoot there, aren't you?" 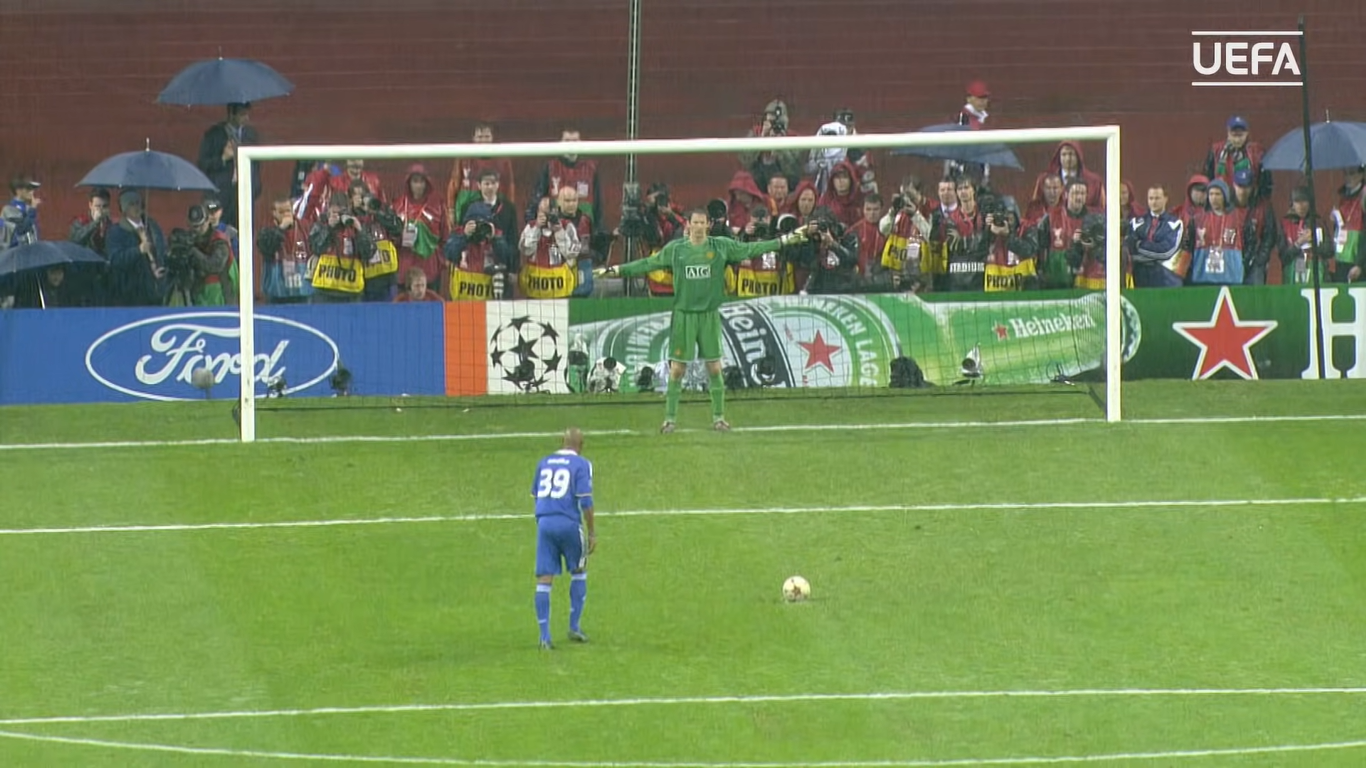 Anelka was flummoxed, and he hit a tame shot (mid-height, of course) to van der Sar's right, which comfortably found the fists of the Dutch keeper, and Manchester United was European champion.

This strategy has been frequently repeated in the years since, and it was most recently utilized by Swiss keeper Yann Sommer during his country's penalty shootout against Spain in the quarterfinals of Euro 2020. 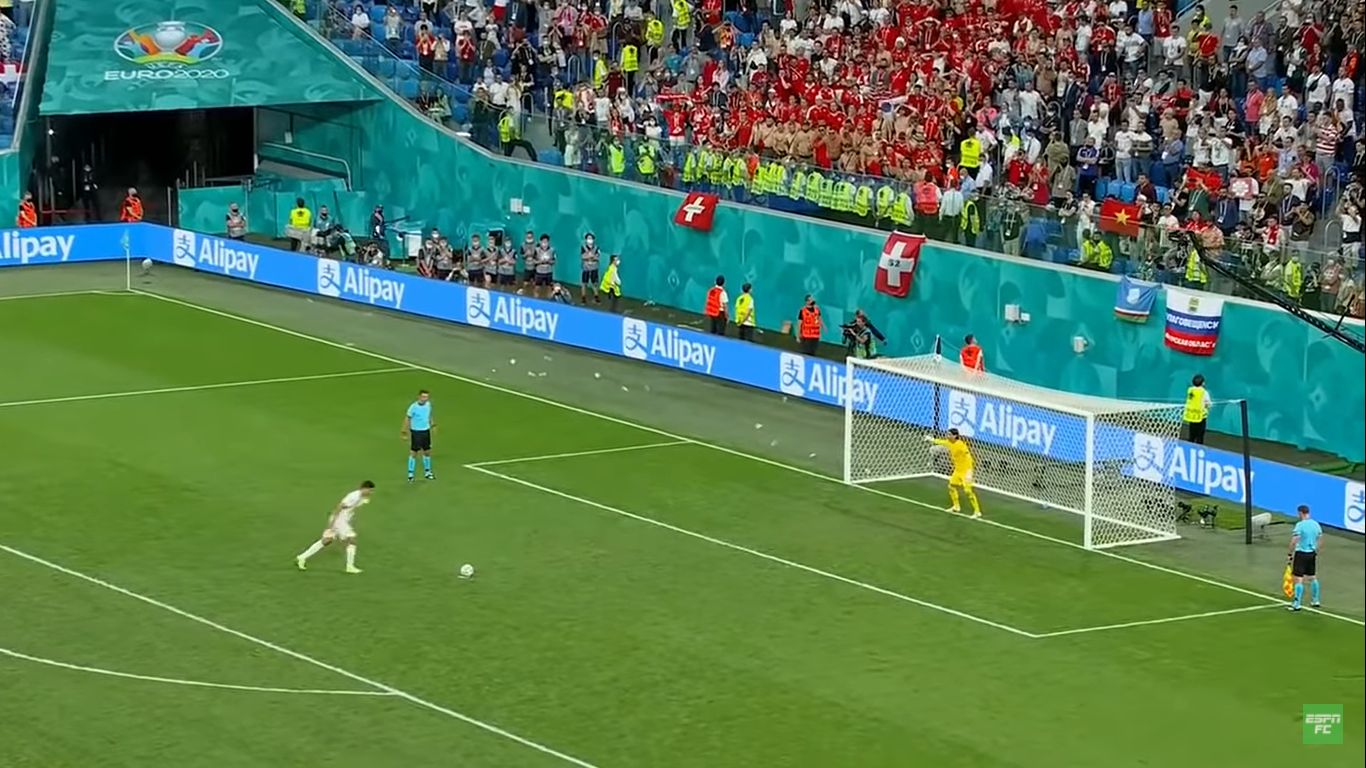 As Manchester City midfielder Rodri stepped up to take Spain's third penalty kick, Sommer pointed to the right before diving to his left and saving the penalty.

Messing Up the Penalty Spot

While the other strategies could be described as mind games, this one begins to toe the line (or spot, in this case) of cheating. Back in 2015, Augsburg keeper Marwin Hitz intentionally defaced the area around the penalty spot with his cleats, and when Cologne striker Anthony Modeste stepped up to take his spot kick, he slipped on the newly damaged turf, allowing Hitz to make the save.

"That wasn’t the most fair thing to do,” Hitz later said. “When I see that, that’s not me. It won’t happen again. I have never saved a penalty before so I thought I would just make the taker a little bit unsure."

Despite the questionable morality of the move, Augsburg would go on to win 1-0 and finish just two points above the relegation zone, possibly staying in the Bundesliga thanks to Hitz's gamesmanship.