Bring Me Belichick: American Sports Coaches We Want To See As Soccer Managers

We're not sure if coaching prowess carry over from sport to sport, but we'd love to see these American sports coaches managing professional soccer teams.
Getty Images

There's an old meme that occasionally makes the rounds that highlights the difference between American football coaches and European fútbol coaches.

It depicts the American coaches as overweight men wearing poor-fitting clothes, while their European counterparts are all suave, fit, suit-wearing gentlemen. 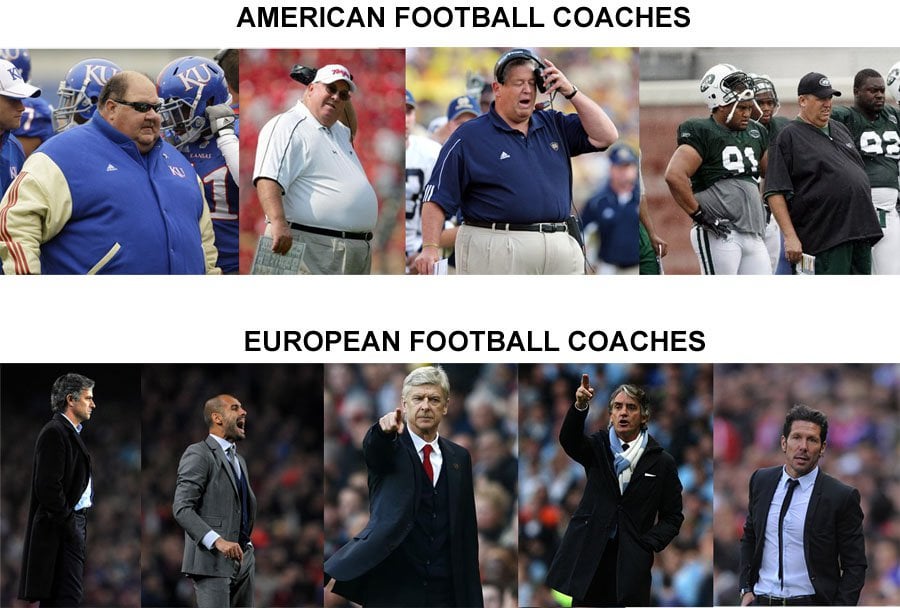 But what if roles were reversed, and suddenly some of the US's most prominent coaches became soccer managers, either in MLS or abroad. How would their mindsets and strategic thinking carry over?

And what about their demeanor? They would be more than just a fat guy, they would be a presence as they barked orders from the sideline — the type of intimidating manager rarely seen in soccer these days.

There is by no means a perfect correlation, but assuming that these American coaches would be willing to make the crossover to soccer, we think they could thrive coaching the world's game.

American Sports Coaches We'd Like To See As Soccer Managers

It's the 88th minute. Your team is up one-nil. You look over to the opposing sideline and you see the ominous figure of Bill Belichick — cutoff hoody draped over his brooding face as he murmurs something into his headset. Five minutes later, Belichick's team is now winning 2-1, his expression unchanged during the events that just occurred. In his eyes, the comeback was always inevitable.

Belichick has always looked at the game of football differently, thriving in the margins to get the best out of his team. Although it has been documented that Belichick neither knows nor cares about the sport, the New England Patriots head coach is obsessed with one thing: winning.

Oftentimes, it takes someone with experience outside of a sport to come in with a fresh perspective and bring about change (i.e. famous UConn coach Joe Morrone), and I'm convinced that if given the time, Belichick would reinvent the way we think about soccer.

He's not the same intimidating figure as Belichick, but the sight of Andy Reid on the sideline would truly be something to see. Sporting a 4XL jacket that looks like an oversized red tarp, he's the opposite of the slim, suit-wearing managers of the soccer world.

Yet Reid has won 63 percent of his games during his career — better than Jürgen Klopp at Liverpool — and 71 percent of his games as the Chiefs' head coach, about even with Pep Guardiola at Man City. As one of the elite coaches in American sports, his inclusion on this list extends far beyond his physical appearance.

It often feels like that in the NBA, the presence of star players far outweighs the influence of the head coach. That is not the case for longtime Spurs coach Gregg Popovich. While the spacing and three-point shooting of modern basketball teams is fun to watch, the ball movement and fundamentals of Gregg Popovich's Spurs teams in the 2010s will forever be unsurpassed.

His teams were in constant motion as they played with patience and unselfishness, passing up a good shot for a great shot — much like Pep Guardiola's Manchester City sides. One can only imagine what Pop could do with a field 17 times bigger than a basketball court.

The 2013 and 2014 Spurs had insane ball movement, this is peak basketball. pic.twitter.com/xfZG4Zce6o

Regardless of the sport, any coach with a combined 44 years of experience in the professional game is worth hiring.

Dusty Baker is the only manager in MLB history to take five different teams to the playoffs. He also took over the Astros during the peak of the fallout from the Astros' sign-stealing scandal and has dealt with it admirably. He has a great understanding of the human spirit and he always goes with his gut feeling. More often than not, he's right.

He's also just one cool cat, standing on the dugout steps with a toothpick in his mouth while sporting a soul patch and sunglasses — a true old-timer.

Formerly of the Detroit Tigers, Florida Marlins, and Pittsburgh Pirates

When I think of the stereotypical MLB manager, one of the first men that comes to mind is former Detroit Tigers manager Jim Leyland. With a thick mustache, grizzled face, and serious demeanor, Leyland was built to sit on the bench, casting his glare toward the field as he contemplated the events unfolding.

Most importantly, Leyland was a serious disciple of the dugout heater. The man could puff through a pack with the best of them, and when Leyland had one burning, former MLB first baseman Sean Casey described the manager as, "a pitbull eating his food, you didn't mess with him."

Who wouldn't want to see the Maurizio Sarri of baseball managing an MLS team?