It Was A Rough Opening Weekend For Premier League Goalkeepers

Goalscoring may have been the focus of the opening weekend of the Premier League season, as Manchester United's five-goal total against Leeds and West Ham's six-goal thriller against Newcastle both delighted EPL fans, but for goalkeeping fanatics, the real story was the all-around poor play between the sticks from some of the EPL's top keepers.

There were no terrible errors like the ones we saw at Euro 2020, but there was widespread sloppiness and numerous technical mistakes that led to a copious amount of soft goals.

The poor goalkeeping was evident from the opening match of the season on Friday.

David Raya was solid for Brentford, earning a shutout and making arguably the save of the weekend to deny Nicolas Pépé. But his counterpart Bernd Leno looked flummoxed in the Arsenal goal, unable to deal with the pressure and energy of the newly-promoted Brentford side.

The two clubs were about even on expected goals (just an 0.2 difference in xG between them), but Leno's passive goalkeeping helped the Bees earn a 2-0 victory. The German reacted late to Brentford's opener, although he was partially-shielded by Arsenal right back Callum Chambers. Infogol gave Sergi Canós' shot just a four percent chance of reaching the back of the net.

The second goal was even more egregious. Leno got himself stuck behind multiple bodies on a long throw-in, allowing the ball to bounce right in front of the goal and providing an easy finish for Christian Nørgaard at the far post.

The argument can be made that Brentford defender Pontus Jansson obstructed Leno, but the keeper made no real effort to get around Jansson or attack the ball. One of the golden rules of goalkeeping is never let the ball bounce inside the six-yard area, and the fact that Leno allowed the ball to bounce this close to the goal without even making a play for it suggests a real lack of confidence from the German. 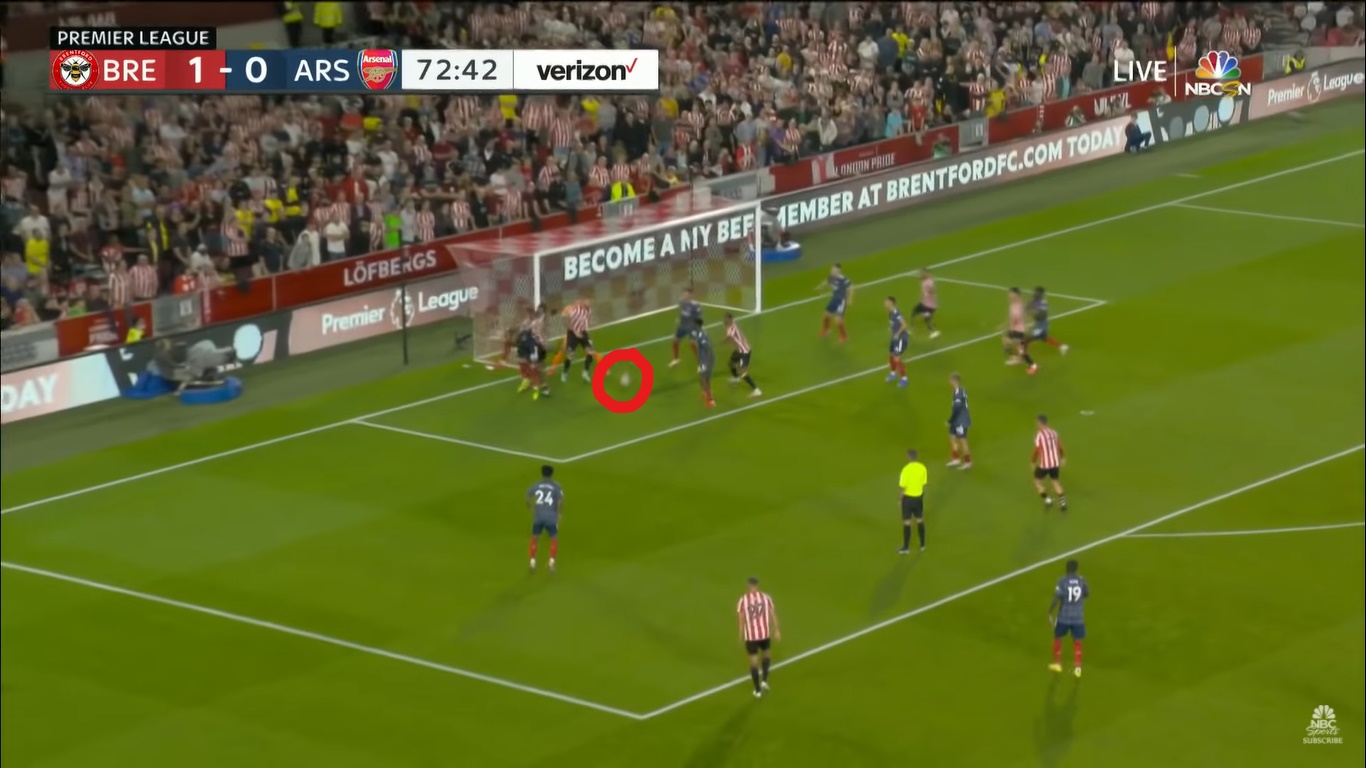 Leno's performance was just the start of the poor goalkeeping that graced Premier League pitches over the weekend.

In Norwich, another Euro 2020 backup — Tim Krul — also had a shaky season debut. The Liverpool opener was by far the worst from the Dutchman's perspective, as he failed to get set properly, allowing for Diego Jota's shot to travel through his legs and into the back of the net.

Liverpool are ON THE BOARD at Norwich!

At the very least, Krul should have come out and cut down the angle (which he had time to do), but by failing to set himself, Krul sharply decreases his potential save radius. 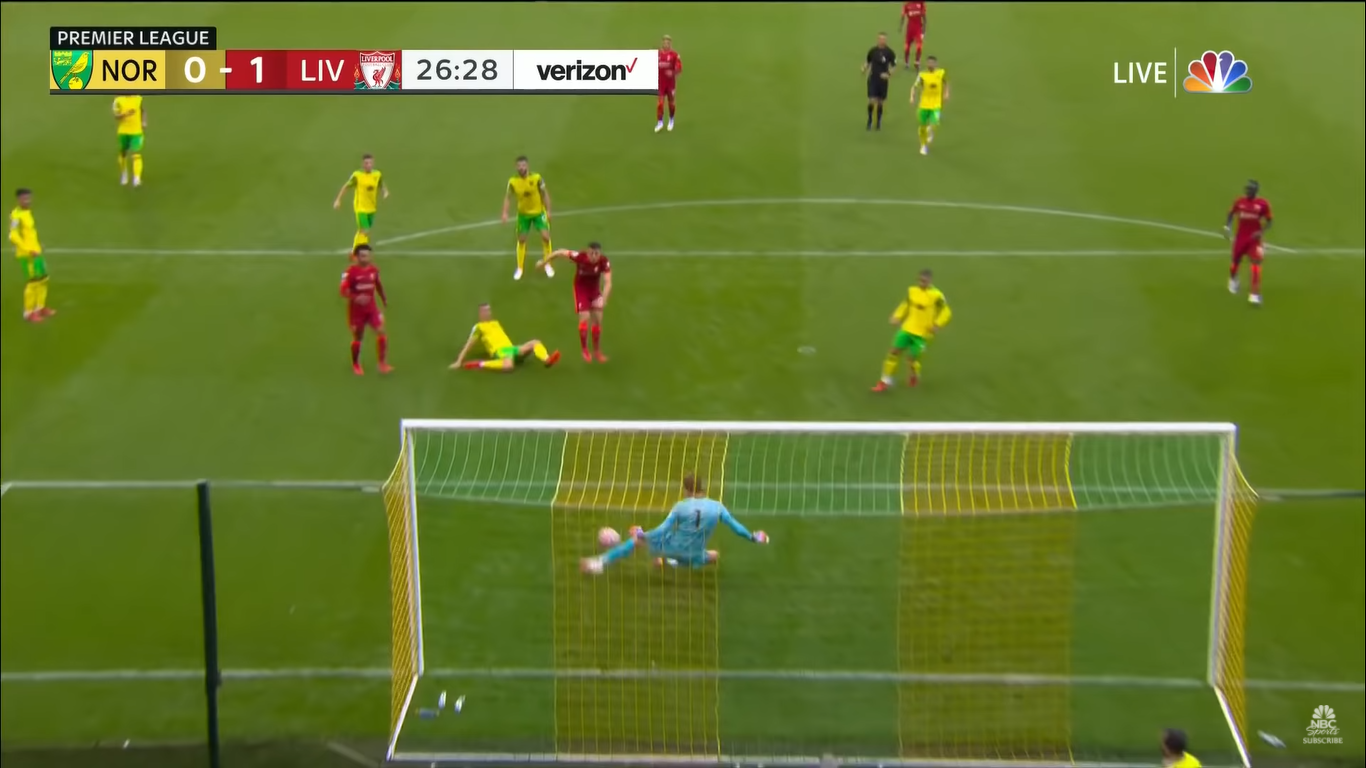 Krul was unlucky not to save the second goal, as he did well to come out and cut down the angle (learning from the opener), but saw the ball just squirt past his right foot.

The Dutchman was left vulnerable on Liverpool's second goal, but he should have done much better on the third goal of the match, a strike from the edge of the 18 from Mo Salah.

Interestingly enough, at the moment that Salah hits the ball, Krul is actually in position to make a good dive. 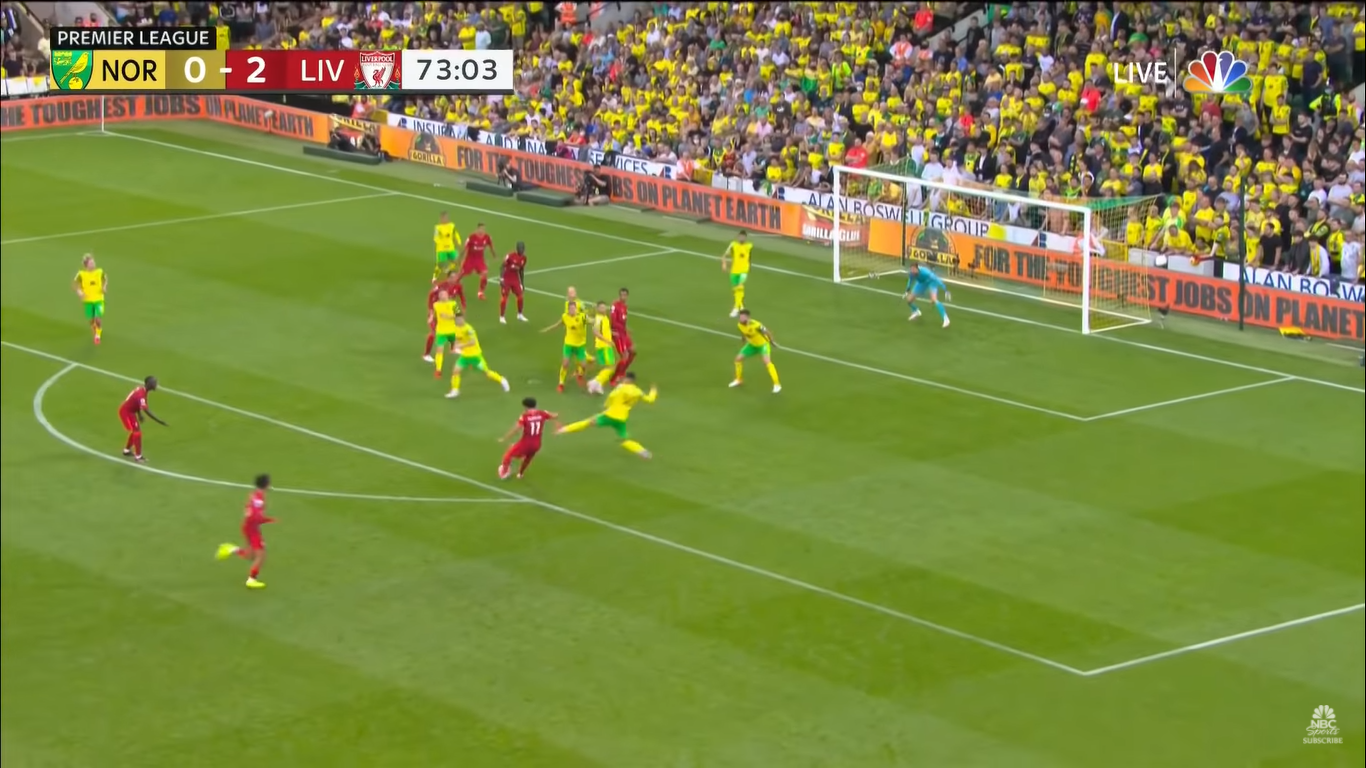 His feet are set, body weight is forward, eyes are focused on the ball; but his first step completely negates his strong setup. By taking too big of a step out with his right foot, he kills his momentum and drastically reduces the amount of power he can get from his dive. 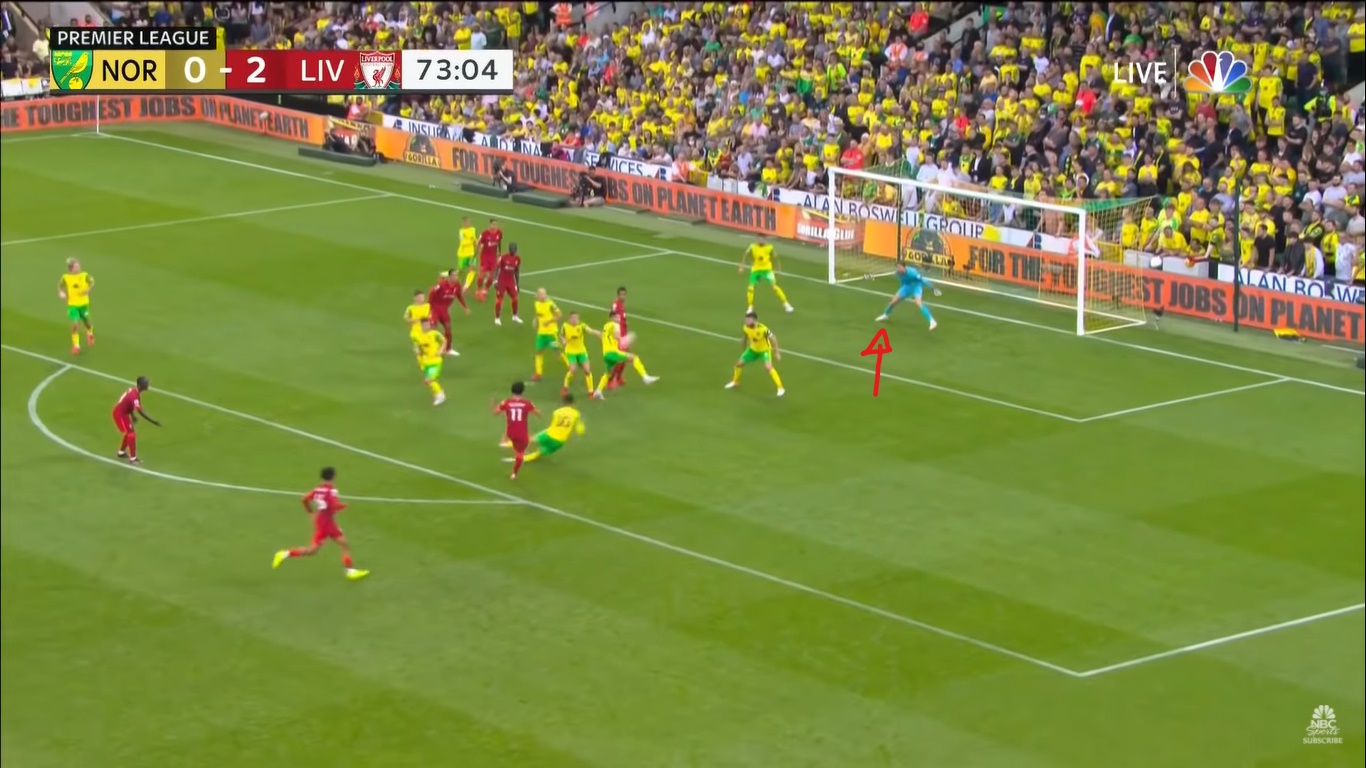 The result is less of a dive, and more of a weak flail at the ball with his right arm. Even if his hand makes contact with the ball, it would still end up in the back of the net because his body generated so little power.

In the end, Mo Salah gets a goal on a shot that had just a 7 percent chance of finding the back of the net, while Tim Krul allowed a total of 1.4 more goals than expected.

The Argentine let a shot from Dennis — which only had a 10 percent chance of crossing the line — slip right under his arms. Martínez will be the first to tell you that he should be saving that one.

Martínez will be the first to tell you that he should be saving that one, but nobody had a worse weekend than Leeds United keeper Illan Meslier.

Thanks to some robust finishing from Manchester United and a few technical mistakes, the Frenchman allowed 3.1 more goals than expected given the shots he faced.

Meslier allowed five goals in total against the Red Devils, and the 21-year-old made two costly errors to give Manchester the lead in the 30th minute.

The Frenchman's wayward goal kick failed to find a teammate, and Manchester United took advantage of Leeds' spread-out spacing. After just three passes, Bruno Fernandes was in on goal.

Meslier compounds his initial error by getting himself caught in no-man's land, neither committing to coming out nor staying on his line. He starts to come out, stops, then shuffles sideways, making it nearly impossible to get set for the shot.

Fernandes' strike hits Meslier on the inside of the right leg, but the Frenchman's sideways/backward momentum prevents him from getting a strong block on the ball.

The PASS.
The FINISH.

Manchester United are on the board! #MyPLMorning

Should Meslier have come out or should he have stayed on his line? Either option would have been better than the position he ended up in, but I think staying on his line was the slightly better choice. If he comes out, Meslier greatly reduces the angle and his forward momentum decreases the chance of a deflection getting by him.

If Meslier stays on his line, he has time to set himself and more of an opportunity to react and make a dive, especially since Fernandes' first touch takes him further away from goal and onto his left foot. The Portuguese midfielder is also off-balance when he takes the shot, making it more difficult to aim his strike.

The next three Manchester United goals were simply examples of great finishes that left Meslier helpless, as none of them had more than a 20 percent chance of finding the back of the net, per Infogol.

But the 21-year-old definitely should have done better on the fifth goal. It was a decently-struck finish from the Brazilian midfielder, but Meslier took himself out of the play by being on his heels.

Here is Meslier as the ball is coming in to Fred: 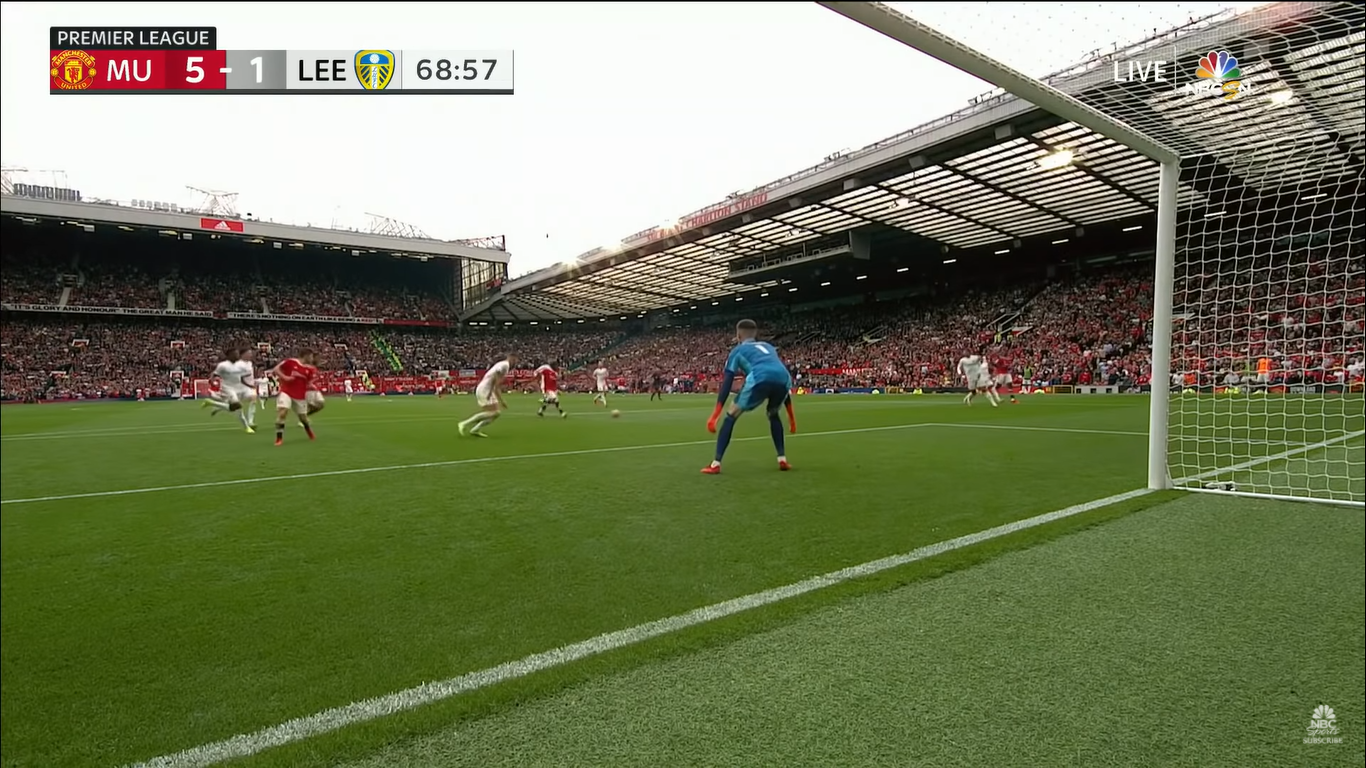 And here is Meslier after the ball is struck: 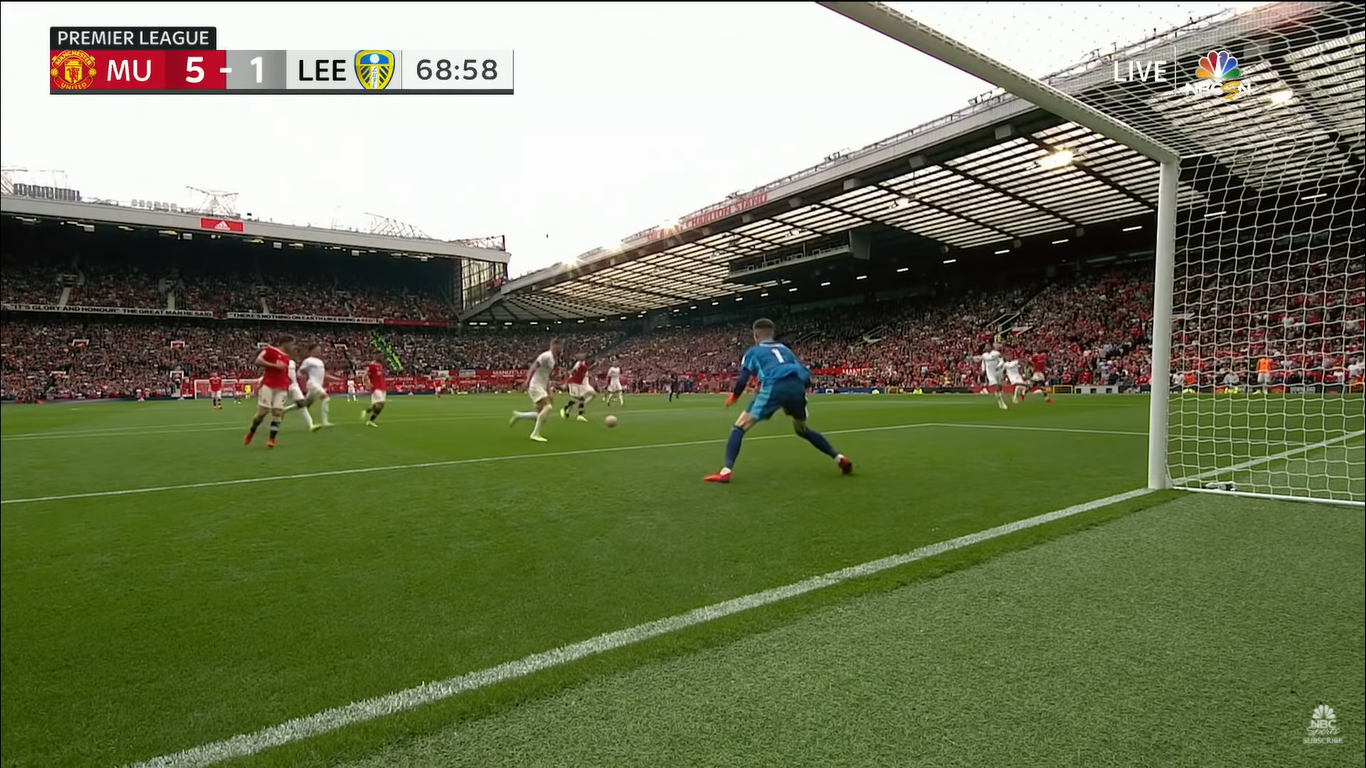 His feet are too wide, his weight is leaning back, and he is further back than when he started. From this position, any dive is essentially impossible, and his reactions are also severely impaired.

By the time the ball reaches him, all Meslier can really do is poke out his leg and hope that his left foot can block the ball — which he is unable to do. 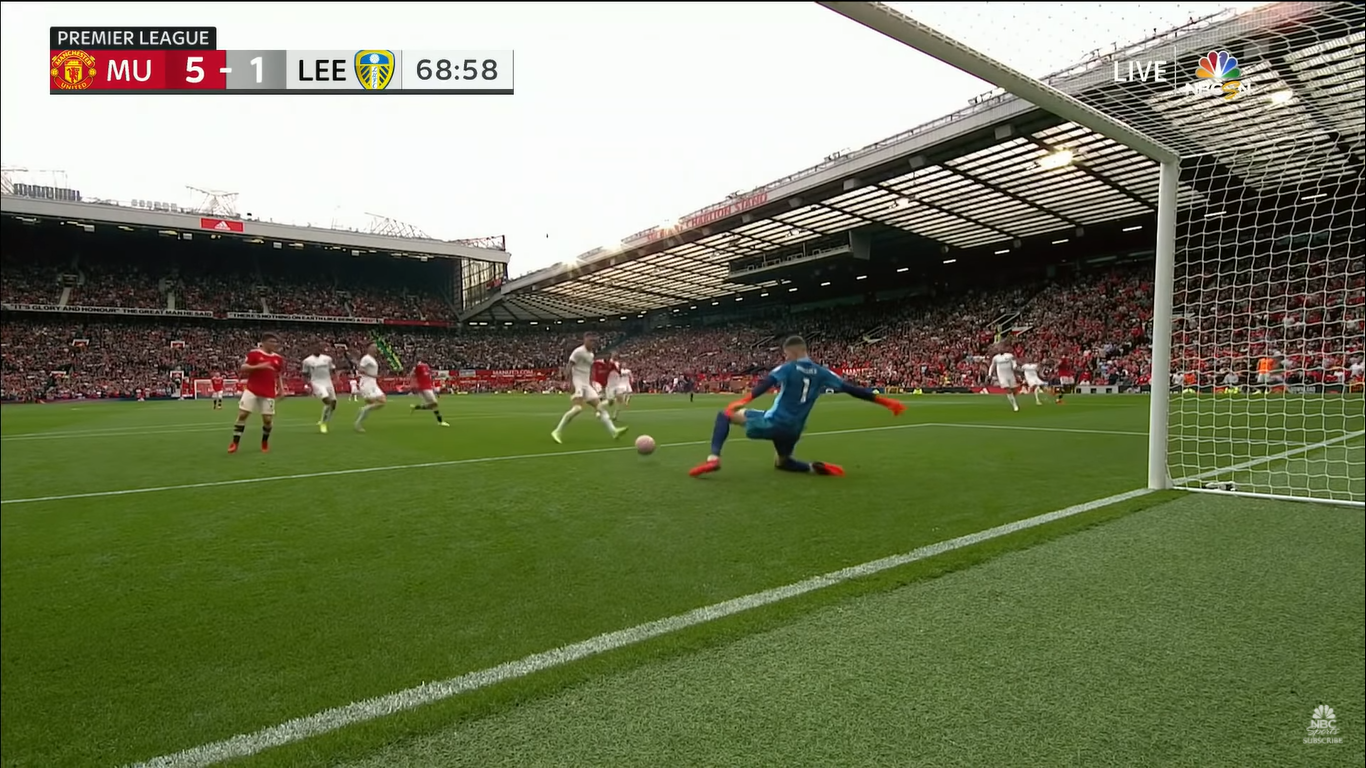 Meslier's 3.1 more goals allowed based on the shots he faced is more a product of some pinpoint shots from Manchester United, but the Frenchman will feel that he could have done much better on the first and last goals.

One of the few goalkeepers to have a good weekend was Liverpool's Alisson, who made sure that the 3-0 scoreline in favor of the Reds was not truly reflective of Norwich's attacking prowess.

His decision-making in 1v1 scenarios twice thwarted Norwich, including an 87th minute chance from just a few yards out when a goal seemed almost certain for the Canaries.