Is Headgear In Soccer A Brilliant Safety Measure Or A Dangerous Buffer?

Jamie Bartlett May 11, 2015
Fabric bands have slowly arrived on the heads of young and injured soccer players. Other than keeping those waving locks in place, are these bands any good at protecting your brain?

Today, Ali Krieger suited up to start for the USWNT against Ireland with an additional piece to her kit. Sporting a black headband with a neon green unequal sign, Krieger is wearing the piece as additional protection following a moderate concussion she suffered exactly a month ago playing for the Washington Spirit. 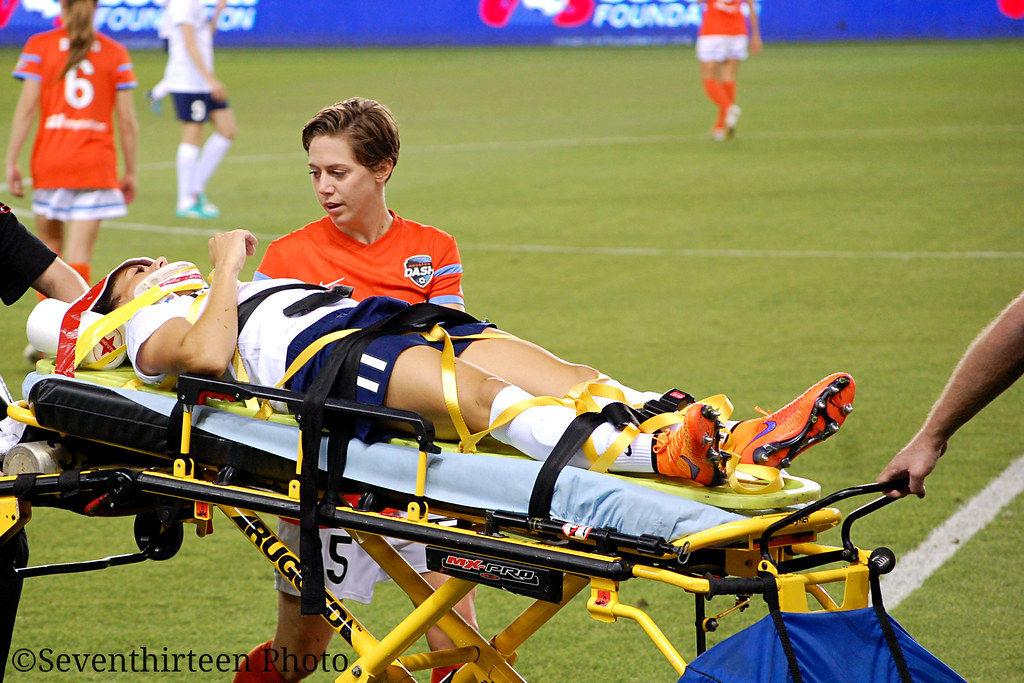 Ali Krieger is carted off teh field after suffering a concussion during the Washington Spirit/Houston Dash match on April 10th. Photo: SeventhirteenPhoto | Flickr

Wayne Rooney sported something similar in 2013 when he surprisingly returned early after suffering a severe gash from an impact to his forehead against another player.

While the headwear is clearly a fashion statement, can players expect these types of interventions to protect them? Will this added protection get them back on the field faster?

The science behind protective devices is not clear. In simple and controlled laboratory studies, padding, like those seen in the headbands, can reduce the speed and force your brain will experience after contact with the ball. This happens by softening the blow and spreading the force across the band. Head impacts do not just occur between the player and the ball, they also occur via contact with another player. In fact, the majority of concussion in soccer are due to player-to-player contact.

Players who have previously experienced a concussion are automatically at an increased risk for another brain injury. Theoretically, any reduction in force should reduce the chance a player will suffer an injury after impact. So why are we not seeing more headbands in professional soccer?

Similar to the controversy that has evolved in the NFL, many players believe the extra headgear will mark them as a weak player or reduce their ability to perform. Soccer is the only sport that intentionally utilizes the head as a tool. If the band reduces the speed and force of a ball towards your head, it’s expected the same result will happen when the ball leaves your head. For a 9 in the box, every bit of speed and force is needed to get the ball in the back of the net.

As parents and coaches are increasingly aware of long-term effects from head injury, companies have emerged with various levels of protective devices that fit anyone from preschool to the pros. Some argue that these companies are unnecessarily capitalizing on parental fears and that the use of headgear will increase the aggressiveness of heading challenges.

Either way, the discussion of head injuries in sports is important to continue publically. Both players and coaches need to be fully informed on the risks of playing after a concussion. While it might seem like a gimmick for pros to endorse the use of such products, the research to create new and effective protective equipment is important, particularly for our young athletes. Krieger’s use of a headband today didn’t hurt her performance, and it possibly encouraged a young player to take their pediatrician’s advice in the future.

Plus, the implementation of mandatory shin guards hasn’t noticeably changed the game or tackling aggression, and that’s just our legs. It makes sense to take even tougher stances with our brains.