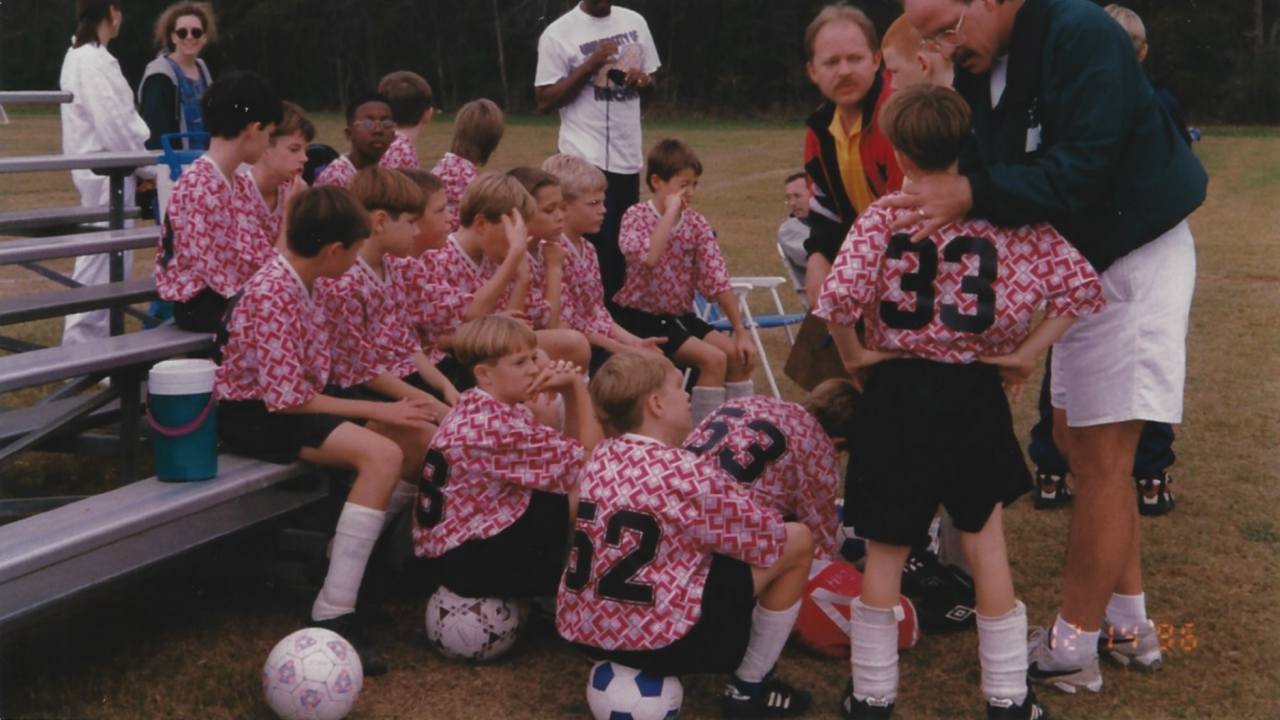 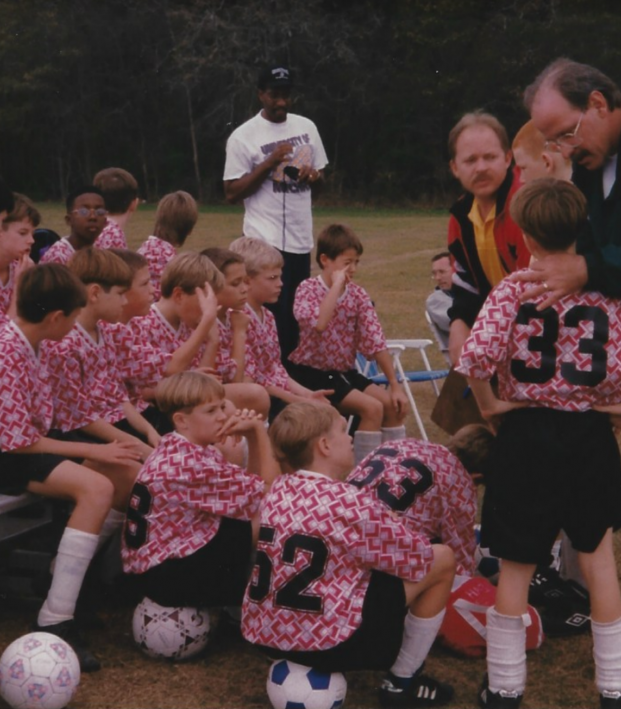 I became a twuncle on Wednesday. What a world to be born into.

People often ask me if I have some sort of twin telepathy and I’ve always been annoyed by the absurd assertion. We occasionally displayed an uncanny awareness of one another as teammates on the soccer pitch growing up, but there was never any psychic link; it’s simply not a real thing. (That’s us in the photo above, sitting on our soccer balls.)

But just before 5 p.m. on Wednesday, I experienced odd chest pains and tightness, which quickly abated. I thought it was just anxiety over all the shit going on in the world, from the novel coronavirus pandemic to the widespread protests enveloping the country. But soon after, my brother texted the family saying his wife had just given birth to their first child.

As my heart soars for the newest member of the family, my heart also aches. Protesters have banded together across the country to force America to come to grips with its endemic white supremacy, which has terrorized people of color for more than 400 years. My stomach drops thinking of the novel coronavirus pandemic, which has claimed the lives of hundreds of thousands, a number likely to grow as police brutality has sent people into the streets. My angst kicks in as tens of millions have lost their jobs while the stock market bafflingly climbs.

I fear for the world in which my newborn nephew will grow up.

Just 10 days prior, Derek Chauvin and three fellow police officers crushed the life out of a man in Minneapolis. George Floyd is the name now, but countless more have come before him. How many will have to come after?

I’ve been on PTO lately, trying to take a break from all the shit. Trying. It’s hard to look away when the world is burning, the U.S. infected by two deadly diseases and an economy that only works for the privileged.

There is still soccer going on — this is a soccer website after all — but none of it really seems to matter. While at first sport seemed like a nice diversion from COVID-19, now it seems like an unnecessary distraction from the systemized violence that we all have abided for far too long.

I've watched as the football world has taken its stance following the murder of George Floyd. After months out of the limelight as the coronavirus forced all sports to suspend play, soccer players again took the spotlight in speaking out against racism.

In the Bundesliga, Weston McKennie wore a “Justice for George” armband, Marcus Thuram celebrated a goal by taking a knee and Jadon Sancho revealed a “Justice for George Floyd” undershirt after scoring. Bayern Munich players wore #BlackLivesMatter warm-up shirts and Borussia Dortmund and Hertha Berlin players took a knee together before a match. Many more have spoken up on social media, from Zack Steffen to Kylian Mbappé. Clubs like Liverpool, not yet back in league play, took knees during practice to honor Floyd, showing more empathy for the loss of life than the president of the United States.

We owe it to our ancestors before us and those who will come after us to continue the fight. @VOYCEnow pic.twitter.com/fVx7bgoPF7

Back stateside, MLS clubs that last year wanted to stifle antifascist symbols belatedly released statements while simultaneously trying to lockout players during a pandemic. Some statements were better than others, but much of it felt forced and insincere, few addressing police brutality for fear of alienating those who often oversee stadium security. At least in Minnesota, fourth-tier Minneapolis SC has worked tirelessly to support the community in a sharp contrast to generic club statements. Minnesota United players spoke out against Floyd’s murder. (The uncle of Philando Castile, another man killed by Minnesota police, wore a Loons shirt while doing an interview on CNN this week.) The LA Galaxy quickly parted ways with a midfielder whose wife made obscenely racist comments.

U.S. Soccer, which instituted anthem rules when Megan Rapinoe tried to protest police violence a couple years ago, made a vague “united against racism” comment but failed to really speak to the situation in any meaningful way. The NWSL has done better than most leagues, promoting Black Lives Matter and amplifying the voices of players attempting to bring about positive change.

It is going to take EVERYONE! pic.twitter.com/JcgP2MWvnM

But even the country’s most progressive professional sports league has those who hold back progress, such as Carli Lloyd, who was all but canceled last Saturday for not getting it.

can you believe that in less than 12 hours carli lloyd single handedly ended racism  pic.twitter.com/oi7IofEJYr

And yet many in this country love Lloyd unconditionally while simultaneously hating Rapinoe with the same fervor. These people, like New Orleans Saints quarterback Drew Brees, are against Rapinoe and Colin Kaepernick taking a knee but apparently fine with Derek Chauvin doing the same, failing to properly educate themselves on what Black Lives Matter actually means. Don’t think there’s racism prevalent in every corner of American society? Just look at Walmart, which refused action after dozens of school shootings but as soon as Black Lives Matter protests took over the country quickly took firearms and ammo off store shelves.

While soccer stadiums lay empty to prevent the spread of COVID-19, protesters around the globe have packed into streets, highways, bridges and parks. So pressing are the issues of the racist and violent police officers of America that thousands of people in hundreds of cities have risked their lives to try to get people in power to listen.

Meanwhile police, decked out in more armor than a medieval knight whilst hospital workers can’t get a damn mask during a pandemic, have repeatedly used excessive, violent force, including chemical weapons banned from warfare and skull-crushing rubber bullets. Imagine seeing protests against police violence and thinking the answer is more police violence. It’s almost as if cops want to dispel notions they’re racist by instead showing they’re horribly violent to everyone regardless of skin color.

If you only watch Fox News, you probably think all of this excessive force is necessary to stop Antifa and anarchists from looting the country, incendiary scapegoating at its worst. Is there some looting and vandalism? Sure, a little. But you know what? Who the fuck cares if a few stores get looted? Black lives have been looted for centuries in America.

The reality is the vast majority of protests are restrained given the circumstances. Almost every instance of violence has been instigated by the police, who have been horrifyingly ferocious in their response to demonstrators telling them they’re not properly protecting and serving the communities they’re paid to protect and serve.

The footage streaming across my Twitter feed is disturbing. Usually full of soccer highlights and commentary, I’m instead subjected to video after video showing police using excessive force on protesters. An elderly man sadistically shoved to the ground, ignored as blood oozes from his unconscious head. Two college kids having their car windows shattered before being tased repeatedly. Store owners trying to protect their business from looters only to have tear gas tossed into their store by police. Protesters from Atlanta to Tacoma punched, pushed, smashed, beaten and run over by the very folks whose job is to uphold the peace.

You get the feeling DeAndre Yedlin’s grandfather was absolutely right when he told the Newcastle and USMNT defender he should be thankful he doesn’t live in the U.S. right now.

A couple days after George Floyd’s death, my grandfather texted me and told me he’s glad that I am not living in the U.S. right now because he would fear for my life as a young black man. As days have passed, this text from my grandfather has not been able to leave my mind.

To make matters worse, countless journalists have been specifically targeted by police. After three years of the commander in chief repeatedly vilifying the fourth estate, which is guaranteed under the country’s constitution, police have taken their cue. Clearly marked journalists have been subjected to tear gas, pepper spray, rubber bullets, fists and arrests as police across the country have shown a complete lack of control.

Meanwhile, politicians — Democrats and Republicans — have done little to answer these protests. While some states and cities have begun to ban chokeholds and similarly monstrous practices by police officers, they’re not doing enough to battle the systemic racism that exists in every police department in the country.

So far, few police officers have been held accountable for these appalling instances of violence during the protests. When two officers were suspended over the aforementioned incident that sent an elderly man to the hospital, 57 others resigned in protest like fucking spoiled brats shocked they were actually punished for wrongdoing. Growing up playing soccer, if one of my teammates got in trouble, often the whole team would be punished. A similar practice might help to stem the brutality we’ve seen from police the last two weeks.

This isn’t to say all cops are bad individually, but on the whole they’ve shown themselves to be absolute monsters, to the point the whole institution probably needs to be disbanded. Fucking burn it all to the ground, maybe don’t even bother rebuilding. We can do better. We must do better. Imagine what we could do for our communities if we didn’t spend millions giving police better gear than the most well-equipped militaries.

It’s telling as protests continue for a 12th day that even China, which has no leg to stand on when it comes to human rights, has condemned racism in America. The tepid responses from those in power, whether leading a professional soccer club, a city or a police department, are not enough.

It’s easy to be skeptical that nothing will change this time. Protests like these stir up every so often in America and rarely bring about lasting change. I was struck this week by the passion and heartbreak from Sen. Cory Booker, who spoke about how he thought he was marching for the last time following the Rodney King acquittals 30 years ago. The demonstrations have shown no sign of abating as there have been no signs of progress. Now footballers around the globe are taking up the mantle to speak out against the endemic racism that lights the fire of these continued protests.

But there are some small reasons for optimism for my newborn nephew and his two young cousins: These protests are slowly forcing people to finally recognize the white supremacy so prevalent in this country. Minneapolis city council members have vowed to dismantle the city's police force. The mayor of Los Angeles has pledged to defund the LAPD. The NFL admitted it was wrong for how it handled Kaepernick and others taking a knee (will U.S. Soccer follow suit?). Sport has shown it can help change the world.